East Fork of the Chattooga River, North and South Carolina 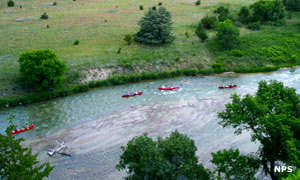 Rapids on the Niobrara River

There are many more National Wild, Scenic and Recreational Rivers than are present in the list below. I'm just beginning to split them out and give them their own list here. It will fill out over time and become more representative of the true state of river statuses as designated by Congress.

The above said, we all know Congress is out of touch with reality so I'm trying to include photographic evidence here as to why the designation. Often enough, the designation is to try to further protect our water resources from the further depredations of modern American business interests.

While very little actual river mileage in the United States is represented by the following list, most of even that is on lands already protected as part of the National Park system, National Forest system, National Conservation Lands system and National Wildlife and Fish Refuges.


Koyukuk River, Alaska
Upper photo is in the public domain
Other photos are courtesy of the National Park Service