A typical scene along the Buffalo National River 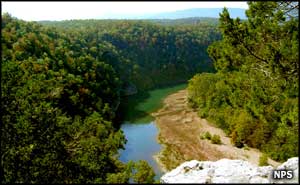 America's first National River, Buffalo River received the designation in 1972. The river is undammed and flows freely for 135 miles, one of the last remaining rivers in the lower 48 states to enjoy that status. About 15.8 miles of the river, from its origin to the Ozark National Forest Boundary is included in the Wild & Scenic Reiver designation. That further breaks down as 9.4 miles Wild and 6.4 miles Scenic. That National River designation also includes the preservation of many pioneer homesteads along the route, homesteads that were established between the 1840's and 1930's.

There are about 100 miles of maintained trails in the park, some of which are open to both hikers and equestrians. Also within the bounds of the park is Fitton Cave (aka Beauty Cave), the longest cave in Arkansas with some 17 miles of mapped cavern and more yet to be explored.

As a "park," the property is strung out all along the river with several visitor contact stations. The main visitor center is at Tyler Bend, Arkansas. That visitor center is open year round from 8:30 am to 4:30 pm except on Federal holidays between Labor Day and Memorial Day. Because of staffing shortages the center may also be closed for 1/2 hour at lunch time now and then. The famous Congressional "sequester" (and now the budget of Donald Trump)) has forced the park to close some facilities, reduce services at other facilities and generally reduce the number and availability of park staff. The park offers a number of campgrounds and picnic pavilions but many are closed, also due to the funding shortfall. That also impacts the operation of the satellite visitor contact stations.

Most folks come to enjoy the river and that is open 24/7/365 with no fees attached (unless you find a campsite or picnic area still open, in which case fees run from $5 to $55 per day, depending on the resource in question).

In 1978, Congress designated the Buffalo National River Wilderness. It's a 34,933-acre property broken into three units. The Upper Buffalo Unit runs along 18 miles of the upper river, contiguous to Upper Buffalo Wilderness (managed by Ozark-St. Francis National Forest). This is the wildest and most primitive section of the river where it flows out of the Ozark Mountains between bluffs of limestone, dolomite and sandstone up to 440 feet high. The water flow alternates between quiet pools and swift whitewater runs. This is also the stretch of river designated Wild & Scenic. Whitewater enthusiasts descend on the area immediately after rain storms increase the river's difficulty to Class III-IV with an average gradient drop of 38 feet per mile.

From Ponca to below Kyles Landing is the Ponca Unit of the wilderness, 11 miles of the most used section of water. This is an area where rainstorms can cause the river to rise as much as 25 feet in 24 hours. The Lower Buffalo Unit is the largest section of wilderness, stretching some 32 miles from Buffalo Point Ranger Station to the town of Buffalo City. The Lower Buffalo Unit borders Leatherwood Wilderness (managed by Ozark National Forest). 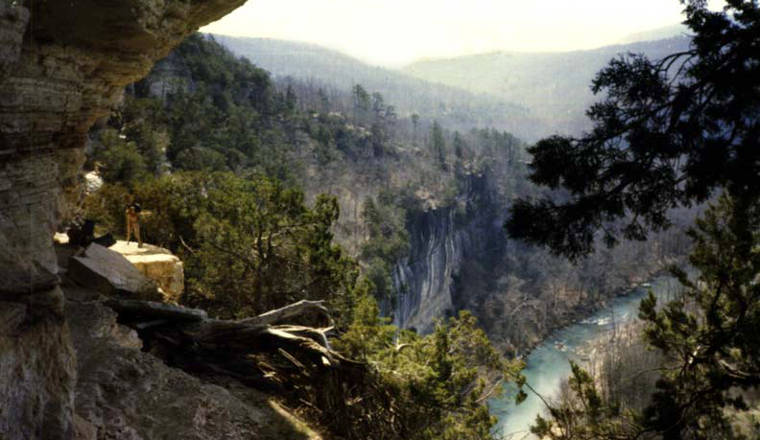 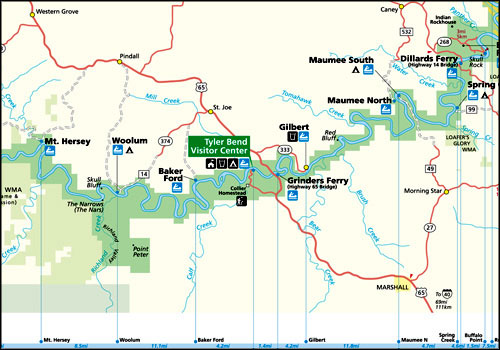