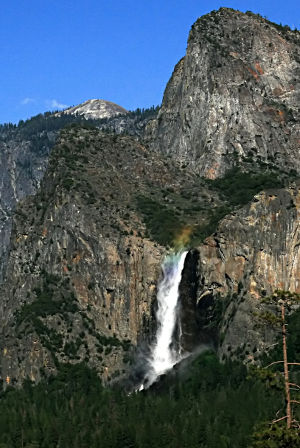 Texas is bigger, Alaska is huge, California is more... How else to put it? When I was growing up, a lot of folks were telling me "California is better." When I was finally old enough to know the difference, I didn't find it any better, but it was brighter and shinier. I started my public school education in California, in a little tiny town that had at least three classrooms per grade. And halfway through first grade I was moved to central Maine (what a shock in January!), to another little tiny town where there were three grades per classroom... (the shock wasn't just the difference in weather, scenery and schools - it was 1959: the Vietnam War was beginning to heat up and Cuba was being taken over by Fidel Castro). But enough of the politics and "fond" memories...

California has both the highest (Mount Whitney) and lowest (Death Valley) points in the 48 contiguous states. There are also the highest waterfall (Upper Yosemite Falls) and 14 peaks over 14,000' (in the 48 states, only Colorado has more). Huge amounts of California are managed by the National Forest Service and the Bureau of Land Management.

When I was first contemplating the building of this website, I took a look at what was on the list for scenic byways, National Park Service sites and National Wildlife Refuges in California. I wasn't intimidated but I realized then this project was going to keep me busy for quite a while... a little further research made me glad I wasn't going to include the several hundred California state parks in this site until later... maybe.


The State Capitol Building in Sacramento