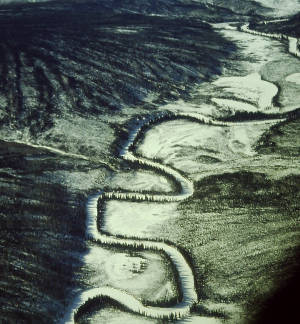 Winter on the Salmon River

The Salmon River rises in the Baird Mountains of the southern Brooks Range and flows mostly to the south for 70 miles to the Kobuk River in Kobuk Valley National Park. Over that route, the river flows across the boundary where Arctic tundra gives way to boreal forest.

The source of the Salmon is among the limestone cirques that surround Mt. Angayukaqsraq, the highest point in the national park. Coming down out the mountains, the river flows through a narrow canyon, vertical bare rock walls in some areas. In the middle reaches the river slows into numerous interconnected deep pools among the rolling hills. The water is exceptionally clear and coupled with the blue-green gravel found in the area, depths of water take on an incredible color. The river slows even more in the lowlands as it passes through an area of low-growing spruce and treeless bogs until it empties into the Kobuk.