Rafters on the Yukon River 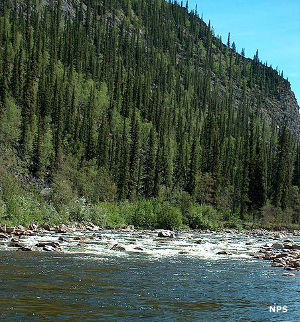 On the Charley River

The Yukon-Charley Rivers National Preserve contains some 2,525,512 acres with a major section of the Yukon River downstream from the Canadian border and including the entire Charley River Basin to the south. Officially, the Charley River and everything feeding into it shares in being designated Charley National Wild & Scenic River. For rafters, the upper 2/3 of the river is generally rated Class III, except when high water makes that Class IV. The lower 1/3 of the river is usually rated Class II, except when high water makes that Class III. Things to look out for: rocks, rapids, submerged vegetation, overhanging vegetation, swift currents and what's the weather doing?

There was a time when the area was overrun with Klondike Gold Rush prospectors but that time is long over. There are still a few old homestead cabins and other "works-of-man" on the property but, for the most part, this land is one step short of wilderness designation. There are also numerous paleontological and archaeological sites on the property but Yukon-Charley Rivers National Preserve is so remote hardly any of them have been explored, never mind excavated and/or cataloged. That's part of the problem for would-be visitors: getting to the property and moving around on it.

There is a 1,000+-mile dog sled race run through this area every winter: the Yukon Quest International Sled Dog Race. That said, during the last great Ice Age, this area was not glaciated. As humans made the journey across the Bering Land Bridge of those days and followed the slow-moving Yukon River upstream, this area was wide open and brimming with wildlife to feed the newcomers. The few archaeological surveys done in the area have identified three prehistoric occupations of Yukon-Charley Rivers up to 11,000 years ago but there's still a lot of work to do.

The town of Eagle is 55 miles northeast of the property and upstream (on the Yukon) of Circle. Some visitors drive to Eagle, float down the Yukon and fly back from Circle. Some leave their vehicles at Circle, fly to Eagle and then float the river. And then there are some hardy souls who spend the entire summer pushing their boats hundreds of miles up the Yukon from the Yukon River Delta. If you decide you want to raft the Charley, well... you'll need to fly to where you want to set off from and most likely enjoy the float at least as far downstream as Circle. Other than that, there are no roads, no trails and unless you're traveling the steep mountainsides, not much solid ground surface to work with until everything freezes over in the fall... and that brings up other logistics problems. That said, there are seven "public use" cabins on the property, nearly all close to the Yukon River. These are historic constructions, most built in the days of gold prospectors and fur trappers although the more recent ones were built "in support of a subsistence lifestyle." All have been somewhat restored but "rustic" is the word most used in their descriptions ("primitive" is a close second). The cabins are free and available first-come, first served.

The human population in the Preserve topped out around 1930 when the gold petered out and fur trapping fell off with the Great Depression. That's a good thing because since World War II, many bird populations have taken a severe hit because of widespread human use of pesticides. Peregrine falcons were placed on the endangered species list, which helped to place Yukon-Charley Rivers on the short list for preservation: this area accounts for about 20% of the peregrine falcon's population in North America (they migrate south to Central and South America in the winter). Recent years have seen such a surge in the peregrine population that the species has been removed from the endangered list.