Surprise Lake, on the floor of the Aniakchak Caldera at Aniakchak National Monument 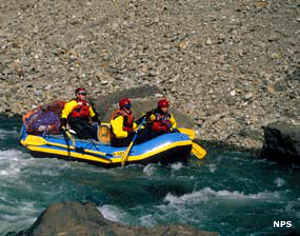 A significant number of those visitors were probably whitewater rafting aficionados, intent on rafting the Aniakchak Wild & Scenic River from Surprise Lake to the bay (about 63 miles and only for the most experienced). One guidebook says, "The weather on Aniakchak is severe; life-threatening conditions can develop rapidly. Extremely violent winds in the caldera, particularly near 'The Gates,' can shred tents and prevent air rescue." Some sections of the river are flat, some very rough.

The river drops more than 1,000 feet in the first 15 miles. The final 12 miles of the float are across open tundra: watch out for the bears, the moose, the wolves and the mosquitoes. Float time: 3 to 4 days from lake to bay. Most folks do it in July, in dry suits and welded into the required life jackets. Most popular raft: 12 to 13 feet long with a rowing platform... and bring lots of repair materials. You might also want to bring your own firewood, too, because dead trees are scarce in all that bare rock and tundra.

This area is a hot spot on the Pacific Ring of Fire with several lava flows and cinder cones present inside the caldera area. The Aniakchak River finds its source inside the caldera at Surprise Lake. The caldera itself is 2,500 feet deep and six miles across, formed during a massive eruption about 3,500 years ago. As this is the Pacific Rim, volcanic activity can recommence at any time.

There are no operating hours or seasonal restrictions imposed by the National Park Service at Aniakchak. However, access to and movement around inside the park may be limited and/or restricted on a moment's notice by weather conditions or volcanic activity. Another thing to be aware of: there are private property inholdings within both the monument and the preserve. Crossing a property line without permission can bring serious consequences. 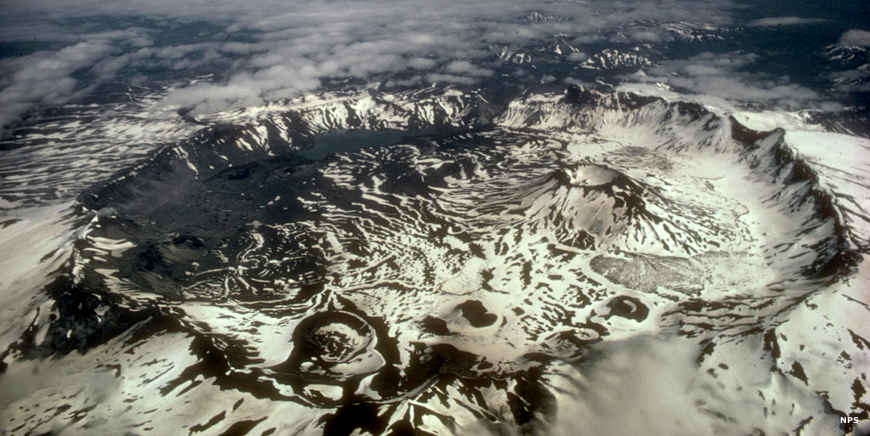 Aerial view of the Aniakchak Caldera