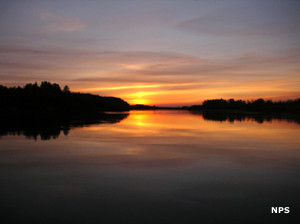 Artifacts found in the area suggest native people have been using the river corridor for some 12,500 years. A gold scam spread in 1898, a scam inviting many of the Klondike miners into the upper Kobuk Valley but very few actually arrived in the area and even fewer of those found any gold to speak of. But the Kobuk River Stampede is still noted in history books.