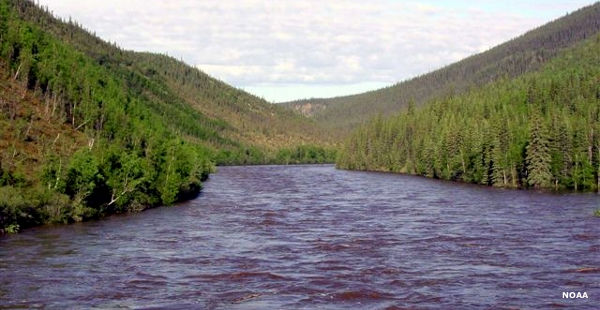 Fortymile River from the Taylor Highway 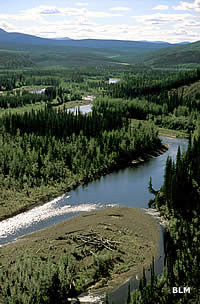 Fortymile River got its name during the Klondike Gold Rush: the mouth of the river is forty miles from Fort Reliance, one of the main staging places used by Yukon and Alaska gold prospectors back in the day. Over the years more than half a million ounces of gold were removed from the Fortymile watershed. On the Canadian side, Cassiar Mining removed more than a million metric tons of asbestos from three open pit mines along Clinton Creek, a tributary of the lower river. Amid all the asbestos lawsuits, Cassiar abandoned the site and went bankrupt in 1992. The territorial and federal governments have worked since to reclaim the site and restore the land, but the damage was considerable.

The Fortymile Wild & Scenic River includes about 392 miles of the Fortymile River forks and tributaries in the watershed. The designation ends at the Canadian border, about 32 mil;es southeast of Eagle, Alaska. For an Alaskan river, the Fortymile is relatively easy to access with four road accesses along the Taylor Highway. The Taylor Highway ends at Eagle and offers a couple more road accesses in close vicinity to Eagle for those who want to float down the river to the Yukon (in Canada). There is also a dirt road off the Top of the World Highway giving access to the river.

The Fortymile River competes with the Taylor Highway as to which is the bigger attraction in eastern Alaska. The highway offers lots of sightseeing, camping and fishing but the river offers all that and float trips, too. Float trips can range from one day to several weeks, depending on how far up the river one begins and how far down the river one wants to go. All along the river are the sites of old trapper cabins and gold mining sites. Much of the mining was accomplished by dredges so disturbance in some areas can be pretty large. A danger along the river is that everything looks pretty much the same, so it is easy to lose track of where one is and where the next set of rapids are. Surprises can be nasty as the river flow varies from Class I to Class V in a matter of minutes.

The Fortymile Canyon was formed over the last several million years as the stream cut steadily down through faulting, folding and uplifting bedrock. This is reflected in the numerous places along the river where riverside gravel benches are perched up to 800 feet above today's water level. In many places along the river the bluffs above are exposed metamorphic rock, some of them showing steeply tilted beds of white marble layered with gneiss and schist.

On the North Fork is an area known as "the Kink." It's a hydrologic feature created in the early 1900's when a mining company blasted a channel through a ridge and diverted the river into it in order to more effectively mine three miles of the old channel. The site is listed on the National Register of Historic Places as an engineering feat of the early 20th century. 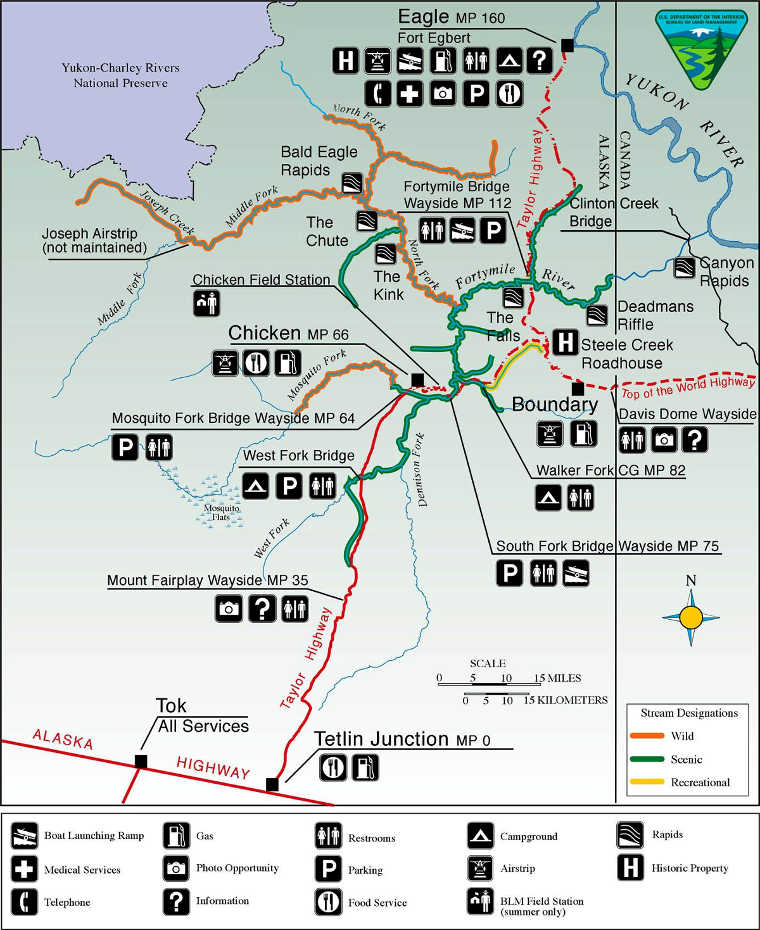