Floating on the Alagnak Wild River 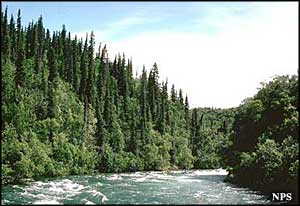 The Alagnak Wild River flows across the Alaska Peninsula from its beginning in the highlands of Katmai National Park and Preserve to Bristol Bay on the Bering Sea. It's not a Federal property as such because the National Park Service only manages most of the Alagnak and Nonvianuk Rivers. There are private in-holdings all along the river and those are places you do not want to go without prior permission from the landowner(s). There are no operating hours or special seasons on the river: everything we humans can do depends strictly on the local weather conditions. The river is also not accessible by any road, the only way in is by air. There are commercial flights that go to King Salmon regularly and from there folks often charter an air taxi to get to the river's edge.

This is an area of very abundant wildlife and the river supports such a population of arctic char, rainbow trout, grayling, northern pike, and king and sockeye salmon that it has become the most popular sportfishing destination in southwest Alaska. The river also offers Class I-III rapids for the adventurous. Should you decide to go camping in the area, you'll need a good bear-proof container. Hanging your food from a tree won't work as the area is mostly treeless tundra...

Nonvianuk or Kukaklek Lakes are the usual starting places for rafting trips. Water is highest in mid-summer and lowest in the spring. When the river is really high, it can be floated in 1 or 2 days. However, high water reduces the number of available camping areas. It can also reduce the fishing success and make the rapids in the upper river more dangerous. When the water is low, there are more rocks exposed the whole 79-mile length of the river. The Wild River designation only covers the upper 67 miles.

Humans have lived along the Alagnak for thousands of years. The oldest sites surveyed by archaeologists date up to 9,000 years ago, to the time of the Paleoarctic tradition. Radiocarbon dated sites go back about 2,300 years. Today, the area is inhabited by Yupik, Denaina and Sugpaiq people from Iguigig, Levelock, Naknek and other villages. They use the river corridor for hunting, berry picking, subsistence fishing and firewood gathering.