126 miles of Birch Creek became designated Wild & Scenic River in 1980 with the passage of the Alaska National Lands Conservation Act. At the time there had been no official survey of the stream for its particular scenic or recreational values, it was simply included as part of the BLM's Eastern Interior Resource Management Plan.

The stream flows from the alpine tundra and windswept ridges of the Steese Conservation Area down into the Yukon Flats, eventually crossing state and private lands before entering Yukon Flats National Wildlife Refuge and finally, more than 200 miles downstream, draining into the Yukon River between Beaver and Fort Yukon. Vegetation along the stream ranges from alpine tundra to paper birch-white spruce forests, varying with the elevation and with the presence (or not) of permafrost. 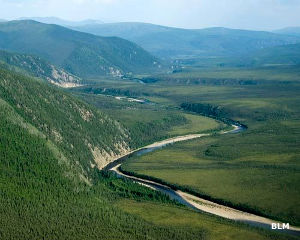 Birch Creek from above

Most folks get their views of the Birch Creek Wild & Scenic River area during a typical summer one-week float of the section: that part of the stream is directly accessible from BLM recreation sites at both ends. Canoeing is the most popular recreational activity but fishing, hunting, trapping, hiking, primitive camping, rock hounding, photography and nature study are also good reasons to visit. Popular winter activities along the frozen river include dog mushing, trapping and cross-country skiing. For a few days every year in February, the Yukon Quest International Sled Dog Race between Fairbanks and Whitehorse attracts dog teams and mushers to the area. Snowmobiling along the creek is popular in late winter and early spring. 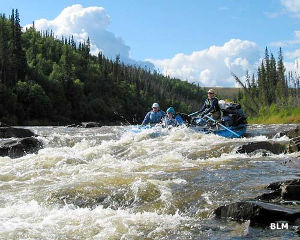 Birch Creek is also famous for the schist exposed in the sheer rock faces. Birch Creek schist underlies most of Alaska but it was first studied in the valleys and canyons of the birch creek area, hence the name. Spectacular examples of the Birch Creek formation are found in rock outcroppings on hillsides above the creek and along the river where sheer rock walls have resisted the erosive action of the water. The striations and coloration of this exposed bedrock are remarkable.

Except for a few log cabins along the river banks, there is virtually no evidence man has ever been in the area: it is nearly as pristine as it was before the Russians arrived more than 200 years ago. 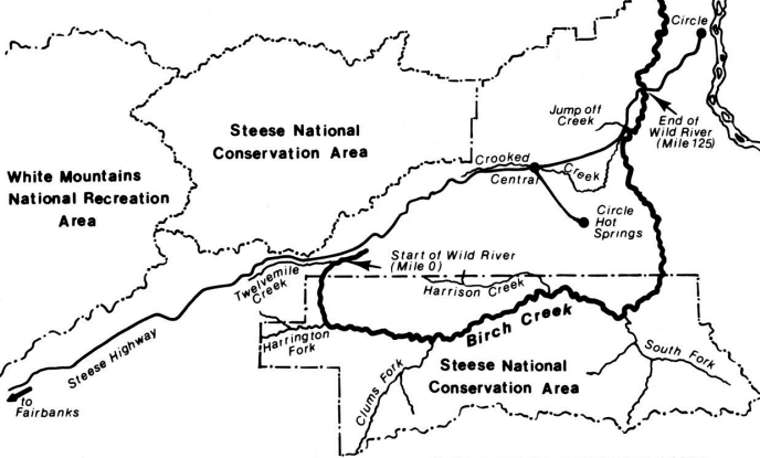