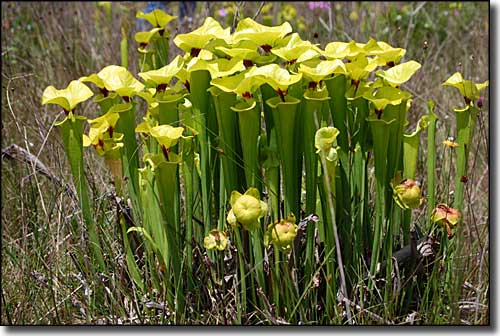 The story goes like this: Cebe Tate (a local farmer) decided to take his shotgun and his hunting dogs into the swamp in search of a panther that was killing his livestock. Supposedly he was lost in the swamp for seven days straight (although some stories say it was only four days), bitten by a poisonous snake and drinking swamp water to slake his thirst. Finally he emerged in a clearing near Carrabelle and murmured "My name is Cebe Tate and I just came from Hell!" Then he died. Since then (1875), that bit of dark and murky swamp has been known as Tate's Hell.

Florida bought the 202,437-acre property in 1994. 40 years of private ownership prior to that had seen more than 800 miles of roadways and drainage ditches built on the land to accommodate the commercial interests of a major timber corporation. Where previously there had been floodplain forest and swamp, wet prairie and flatwoods, baygall, seepage slope, basin swamp, sandhill, upland hardwood forest, dense titi thickets, pine ridges and scrub, most of the area had been drained and the vegetation converted to a pine monoculture. This caused a huge loss of varied habitat and the wildlife that goes with that. It also caused major changes in the water flow from the Apalachicola River into Apalachicola Bay (Apalachicola Bay is a Florida State Aquatic Preserve with shellfish propagation and harvesting as its primary designated use - the Apalachicola River is a designated "Outstanding Florida Water," and is managed for the propagation and maintenance of a healthy and well-balanced mix of fish and wildlife, with a side helping of recreation).

Since the Florida Division of Forestry came into possession of the property, 12 restoration projects have been started (of which 8 were complete as of 2009 and funds ran short). These projects include restoring natural water flow, planting more of the original native plant species and removing or planting over many of the old roadbeds. But this only covers about 39,000 acres of the forest and there are many years of work ahead to return Tate's Hell to something approaching its original state.

Adjoining Tate's Hell State Forest are the New, Crooked and Ochlockonee Rivers. The upper bays south of the forest are filled with marshes fed by the waters of Cash Creek, Rake Creek, High Bluff Creek, Juniper Creek, Doyle Creek and Whiskey George Creek. There are other creeks that flow through the forest, too, but there are no lakes. Some of the old "gravel" pits have filled with water and become ponds and there are a few natural (but shallow) ponds left from the days before the timber company changed things.

These days, you can still drive into the area on a few unpaved but graded roads that will accommodate most city vehicles, as long as they have some clearance. RVs though, that's another story. You don't want to be in here in heavy rain, either. But Tate's Hell State Forest is full of rare plant species and lots of wildlife. The terrain is a mix of floodplain swamp, wet prairie and flatwoods, bottomland forest and sandhill ridges. You'll also find a unique feature at Dwarf Cypress Dome: trees more than 300 years old but only 6 to 15 feet tall. The soil layer around the dome is very thick but a layer of hard clay prevents the cypress roots from growing deep. From the number of carnivorous plants in the area, you can also see the soil is very poor in nutrients. In the Dwarf Cypress Dome area you'll find the Ralph G. Kendrick Boardwalk with interpretive panels and observation platforms. There are also some picnic tables near the parking area.

The 35 miles of creeks, rivers and streams deemed usable for boating, canoeing and fishing are served by a concrete boat ramp at Cash Creek, although there are other launch sites throughout the forest. There are also quite a few day use areas (for picnicking) and primitive campsites scattered through the forest. Most of the campsites are on river banks with fishing and small boat/kayak/canoe access. All sites (except for the Womack Creek Camping Area) require a State Forest Use Permit that costs $8 per site per night. Womack Creek is first come, first served, and fees are deposited in an iron ranger. The stay limit everywhere is 14 consecutive days in any 30-day period.

All of Tate's Hell State Forest is included in the Tate's Hell Wildlife Management Area. Hunting is regulated by the Florida Fish & Wildlife Conservation Commission. Primitive camping during any of the gun seasons requires a State Forest Use Permit (which can be purchased at the Division of Forestry office in Carrabelle). You can also get a special permit that allows hunt camps for the duration of hunting season at that office. 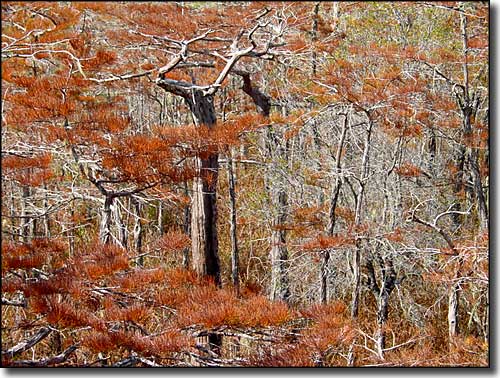