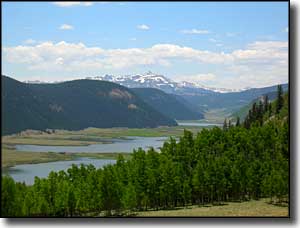 The Silver Thread Scenic Byway is a 117-mile route along Colorado Highway 149 from South Fork through Creede and Lake City to the junction with the West Elk Loop at Blue Mesa Reservoir. Half the route parallels the Rio Grande until the Rio Grande disappears into the San Juan Mountains. Then the road rises up and crosses Clear Creek Pass, then Slumgullion Pass to drop into the valley of the Lake Fork of the Gunnison River and then follows that stream most of the way down to where it meets the main stem of the Gunnison at Blue Mesa Lake.

In the late 1800's, this route was a thoroughfare for prospectors, entrepreneurs, card sharps, gunslingers and even a famous cannibal. Today, it's a beautiful drive through some incredible geological wonders with spectacular views the whole length... and some areas that will have the fishermen and hunters in the crowd drooling. Along the route you will pass four National Wilderness Areas, the eastern ends of the Alpine Loop Back Country Byway and journey through two of the least populated counties in the United States.

The southern end of the Silver Thread is at the junction with US Highway 160 in the center of South Fork. Colorado Highway 149 goes north and follows the Rio Grande almost all the way to Creede. Most of the drive through here is in a progressively narrower canyon until you reach Wagon Wheel Gap. Wagon Wheel Gap got its name from folks who were exploring up the river for a route to Creede. They thought they were the first in the area, then they came across an old wagon wheel in the sands of the river here. Most of this section of the Rio Grande is rated as Gold Medal Trout Waters by the Colorado Division of Wildlife. Easiest place to access the great fishing is at Coller State Wildlife Area, about 10 miles north of South Fork. You'll notice that most of the rock rising above the route is volcanic in origin with layers and layers of granite palisades. Those palisades will continue almost all the way to Creede, although the canyon will open out above Wagon Wheel Gap and really open up as you come into the valley at Wasson, just below where Creede is.

From Creede west, the Rio Grande Valley is a fault block valley: there are geological faults to the north and south of the valley and the valley itself is where the ground dropped as the mountains to the north and south rose. You can really see the volcanic rock in the area of Creede itself. Like most major mining districts, Creede sits on the edge of an ancient volcanic caldera. Nicholas Creede was passing through the area in 1889 researching a route to the mining district around Lake City. He stopped for lunch in the canyon just north of where Creede is now and while sitting down, discovered silver-bearing minerals. Within a couple years, Creede blew into a boomtown with a population nearing 10,000. There were a dozen major silver mines (and probably 50 smaller ones) dug into the hard rock around Creede. In 1892, Creede was producing more than $1 million worth of silver ore per month, then Congress repealed the Sherman Silver Purchase Act in 1893 and silver fell to less than half its former value. The town struggled on but by 1900, the zinc, copper and lead coming out of the mines was of more value than the silver. But during that heyday, folks like Calamity Jane Canary, Bat Masterson, Soapy Smith and Poker Alice came to Creede, not to dig in the ground but to mine for gold at the poker and faro tables. Bob Ford (the assassin of Jesse James) ran a saloon in Creede until Ed O'Kelley put a shotgun to the back of his neck and almost blew his head off (it seems O'Kelley's grandmother back in Missouri had been robbed by Ford a few years earlier and in the course of that robbery, Ford had pulled several of the lady's toenails out with pliers as he tried to extract information from her as to where the "goods" were hidden). Mining in the Creede area still goes on but not nearly at the level it was at even in the 1960's when most of the big mines finally closed down. Today, Creede is primarily a tourism, arts and summer vacation town as the population nearly doubles once it stops freezing every night. If you decide to spend some time in Creede, make sure you drive the Bachelor Loop and get a good look at what Creede was (and still is) really about. You might also want to check out a performance by the internationally famous Creede Repertory Theatre.

From Creede, the Silver Thread runs along the northern edge of the Rio Grande Valley until you turn the corner near Bristol Head and head north. At that point, the Rio Grande heads west and disappears into the San Juan Mountains. You'll have some great views to the west of the Weminuche Wilderness and Rio Grande Pyramid as you rise to Clear Creek Pass. Just below Clear Creek Pass you'll see the signs for North Clear Creek Falls. The overlook is about a mile east of the highway and the view is not to be missed. 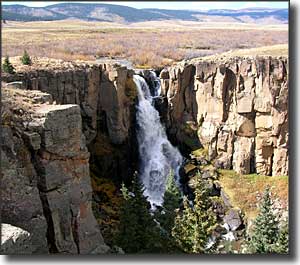 Beyond Clear Creek Pass, the route is high in the mountains with views of La Garita Wilderness off to the north and east. Then you'll cross over Slumgullion Pass and begin the descent beside the Slumgullion Earthflow to Lake San Cristobal. The Slumgullion Earthflow started about 700 years ago when a season of particularly heavy rainfall weakened the volcanic tuff and brecchia around the southern side of Mesa Seco. That weakened volcanic matter slumped down the side of the mountain, all the way down to the Lake Fork of the Gunnison, blocking the river and forming Lake San Cristobal. About 350 years ago, another earthflow started from the same area on the mountain. That new flow is still moving, sometimes as much as 20 feet per year. You can see the evidence in the tilted pines and spruces atop the yellowish soils of the flow.

Partway down that hill you'll come to Windy Point Overlook, another stop you shouldn't miss. The view is simply spectacular with Uncompahgre and Wetterhorn Peaks (two of Colorado's famous 14,000' mountains) off in the distance. Down below is Lake San Cristobal and the valley of the Lake Fork of the Gunnison River. There are several switchbacks in the road but near the bottom is the Alferd Packer Memorial. Alferd Packer was the famous "Cannibal of Lake City." In 1873 he was guiding a group of would-be prospectors across the San Juan Mountains when they got lost in shoulder-deep snow and ran out of food. Camped on a flat spot here above the Lake Fork of the Gunnison, Packer killed his five companions one night as they slept and then lived on the remains for several weeks until the snow had melted enough that he could get out. He carried enough human jerky with him to make it 50 miles over the mountains to the Indian Agency at Cochetopa. He told several versions of his story before finally disappearing into the countryside as John Schwartze. Nine years later he was picked up in Fort Fetterman, Wyoming and transported back to Lake City for trial. The trial was a big sensation: at the time of sentencing one newspaper reporter quoted the judge as saying "There were seven Democrats in Hinsdale County and you ate five of them." He was sentenced to be hung but through various legal avenues had the sentence reduced to voluntary manslaughter and served 18 years, being released in 1901. He died of a stroke in 1907 and was buried in a government cemetery as a veteran of the Union Army during the Civil War.

Below the Packer Memorial, the road makes another switchback, then crosses the Lake Fork of the Gunnison. A short way down the road is the left turn that leads along Lake San Cristobal and over Cimarron Pass as part of the Alpine Loop Back Country Byway. Straight ahead is Lake City.

Lake City was founded in the mid 1870's to service the local silver mines. When the Sherman Silver Purchase Act was repealed in 1893, the local population here also fell way off. But this small, picturesque town in the heart of the San Juan Mountains is still surrounded by several ghost towns and some of the most spectacular mountain scenery in Colorado. To the east is La Garita Wilderness, to the north Powderhorn Wilderness, to the west Uncompahgre Wilderness and to the south Weminuche Wilderness.

From Lake City, the Silver Thread runs alongside the Lake Fork of the Gunnison River for about 18 miles to Gateway where it separates from the stream and heads up and over the ridge to the valley of the Powderhorn, then over another hill into the Gunnison Basin where it drops down to Blue Mesa Reservoir and ends at the junction with the West Elk Loop (US Highway 50). 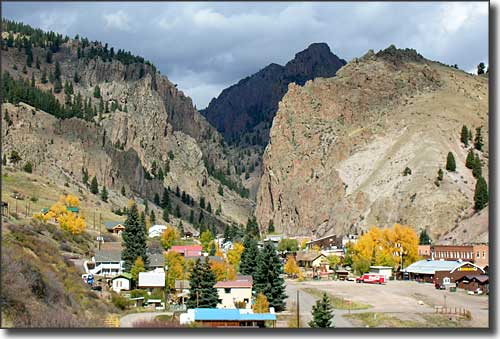 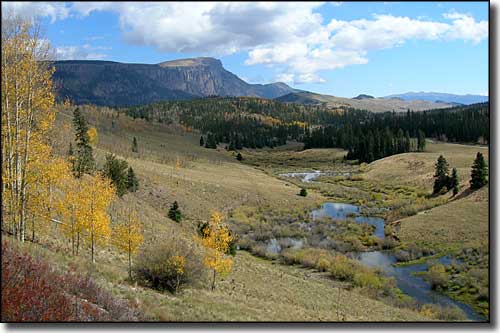 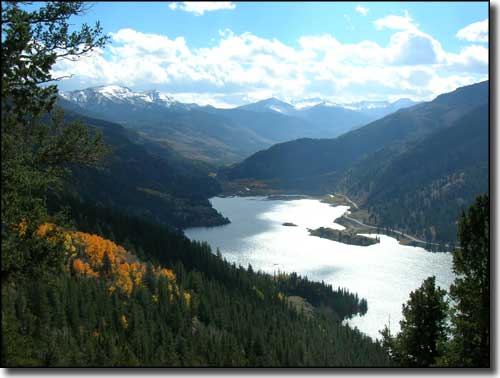 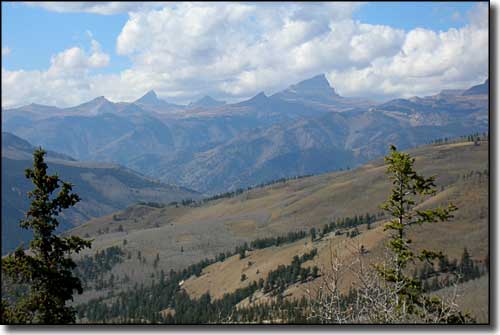 Uncompahgre, Matterhorn and Wetterhorn Peaks from the Windy Point Overlook 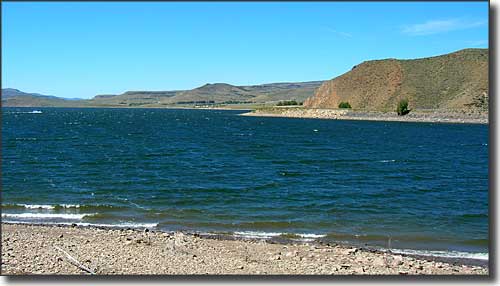