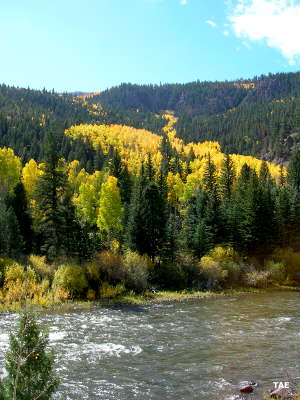 Rio Grande National Forest includes almost two million acres of publicly owned land on the eastern slope of the Continental Divide. Parts of two spectacular mountain ranges, the San Juans and the Sangre de Cristos, are within the Forest. Also included are the headwaters of the third longest river in the United States - the Rio Grande del Norte.

The Rio Grande is one of (what was originally) eleven National Forests in Colorado. President Theodore Roosevelt established the Forest by Presidential Proclamation in 1908. This action combined parts of the former Cochetopah and the present San Juan National Forests to form the Rio Grande National Forest. The Forest Supervisor's Office is located two miles west of Monte Vista on US Highway 160. District Ranger Stations are located in La Jara, Del Norte, Creede, and Saguache.

Things to see & do on the Forest:

Black bear, mule deer, elk, bighorn sheep, mountain goats, red tail hawks, wild turkeys, and mountain lions are among the animals and birds that make the Forest their home. The Colorado Division of Wildlife has also reintroduced moose into the Forest in the Spring Creek area, west of Creede.

Variety is the word to describe the outdoor recreation opportunities of the Forest. From the rugged and jagged peaks of the Sangre de Cristos to the forested table lands and glacial canyons of the San Juan Mountains, the outdoor enthusiast can enjoy any activity suited to the day or the season.