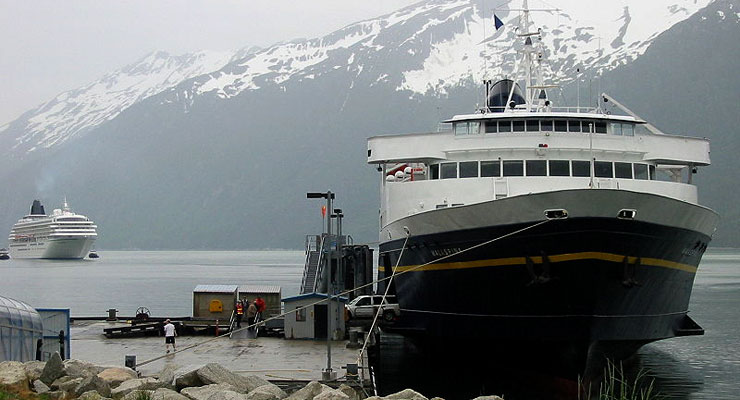 Alaska Marine Highway ferry at the dock in Skagway 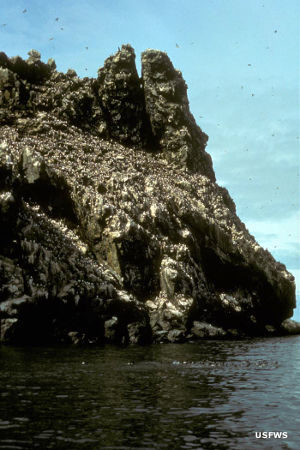 The Alaska Marine Highway stretches out along the panhandle of Alaska (through the Inland Passage) and across the Gulf of Alaska to the Alaska Peninsula, a distance of more than 3,500 miles. And it is a true marine highway: all travel (and sightseeing) is done via ferry. The ferry system serves 33 communities, many of which would be cut off from the world except for the ferries and air transport. There are one-day, two-day and five-day excursions available. Or you could spend several weeks traveling from one end to the other... but this is countryside like you'll see nowhere else on Earth.

The eastern terminus of the ferry system is at Bellingham, Washington and the route north/west goes up the Inside Passage of British Columbia to Alaska's panhandle. The western terminus is at Dutch Harbor on Unalaska Island in the Aleutians. Something to be aware of: this is not a luxury cruise line, the ferries are run for transportation purposes and not specifically for sightseeing. Cabins cost extra and most food is served cafeteria-style. That said, you can't beat the price for the exposure to incredible views of countryside, wildlife and birds... You also have the option of enjoying what are essentially two different travel systems: there are long-haul routes and short-haul routes. What that means is you can get off in one of the larger communities along the way and spend some time traveling the local areas on ferries that make single-day back-and-forth hops. The system carries about 350,000 passengers and 100,000 vehicles annually, with most folks traveling in the summer months. Because of the severe drop in tourist traffic in the winter, regular service drops way off.

Essentially, there are two primary legs to the "highway": the panhandle/Inside Passage area and Prince William Sound/Kodiak Island/Alaska Peninsula and the Aleutians.

The Inland Passage is a twisted and winding route as the ferries travel among more than 1500 islands, visiting several major ports (Prince Rupert, Ketchikan, Juneau, Skagway, Sitka, Wrangell, Petersburg, Haines) and many smaller ones (Hoonah, Angoon, Metlakatla, Pelican, Kake, Tenakee, etc.) This is the area of the Tongass National Forest, Glacier Bay National Park, many wilderness areas and the eastern half of the Alaska Maritime National Wildlife Refuge.