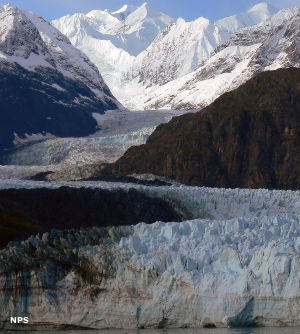 Glacier Bay National Park and Preserve is one of those places that evoke scenes of high mountains meeting the ocean at the edge of great flowing sheets of ice. The native Tlingit tell stories of the area from when the now-exposed fjord was one vast sheet of ice extending out into the sea. Today, that glacial sheet has retreated far back into the fjord, exposing millenia of geologic and environmental processes to the discerning eyes of scientists and tourists alike. There is almost nowhere else on Earth where such magnificence is offered to us puny humans in so small a space...

The area around Glacier Bay was first proclaimed a National Monument in 1925. The Alaska National Interest Lands Conservation Act changed that designation to Glacier Bay National Park and Preserve in 1980. The area had previously been declared an important segment of the Kluane-Wrangell-St. Elias-Glacier Bay-Tatshenshini-Alsek transborder park system, a UNESCO World Heritage Site. The park was included in an International Biosphere Reserve declaration in 1986. Most of the 3,283,246 acres of the park are part of a designated wilderness area. As many visitors to the park arrive by air, fixed-wing aircraft are allowed to land and take-off in certain areas of the wilderness but helicopters and other craft are not. The only way for folks to visit the park are by air and water. 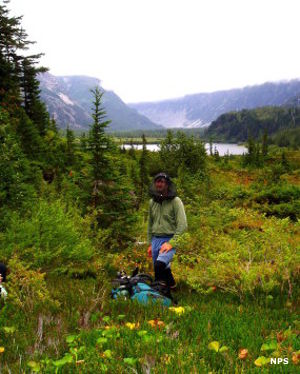 Most folks come to visit Glacier Bay National Park by boat, whether cruise ship with thousands of other folks or singly by canoe or kayak. There are also many tour boats and charter vessels in the area looking for folks who want a more personal and up-close experience than the cruise ships allow while being "safer" than an individual on the sea in a one-man hand-powered craft... There is also a lot of land in the park, waiting to be explored by those who would carry their own gear and sleep on the ground. For the experienced and intrepid explorer, Glacier Bay offers an incredible range of opportunities to be on your own in a pristine wilderness setting where outside assistance may be days away. There is a campground located about one-quarter mile from the Visitor Information Station and would-be campers will need to get a free permit to camp there. Getting the permit requires that you sit through an orientation session first, a session to acquaint you with the joys of camping in such a beautiful and pristine location among the hundreds of bears... Cooking and eating is only allowed in the intertidal zone (the area of beach between the high and low tide water lines).

There are numerous outfitters in the area who specialize in assembling trips via sea kayak, horseback or hiking on foot through the wilderness. There are also folks who specialize in guiding whitewater rafting trips on the Tatshenshini and Alsek Rivers, a world-class float trip through one of the world's highest and most spectacular coastal mountain ranges. There are even a few outfitters who will take folks for the long and involved hikes leading into (and climbing) the peaks of the Fairweather Range (topping out on the summit of Mt. Fairweather at 15,300'), among the least climbed high mountains on the planet. 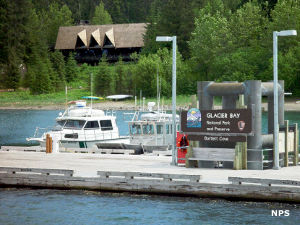 The Glacier Bay Lodge and Visitor Center is located in Yakutat and is open 24 hours a day from late May to early September. There is a Visitor Information Station located at the public dock in Bartlett Cove. The Station is open in May and September from 8 am to 5 pm daily. During June, July and August, the Station is open from 7 am to 9 pm daily. The Visitor Information Station offers permits, information, maps and orientations for campers and boaters. The Station also has rest rooms, drinking water, trash and recycling containers. The Park itself is always open but services in the winter are extremely few and far between. When it's not snowing and hard-frozen, the forest in this area is classed as a temperate rainforest: it rains or snows almost every day of the year.

The Fairweather Range rises above the coastal glaciers 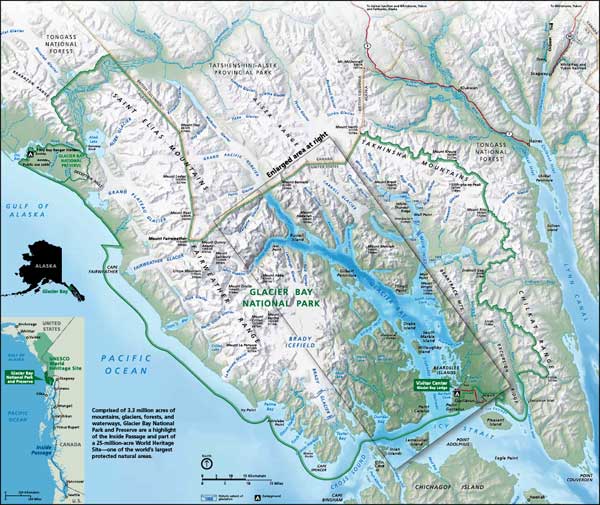