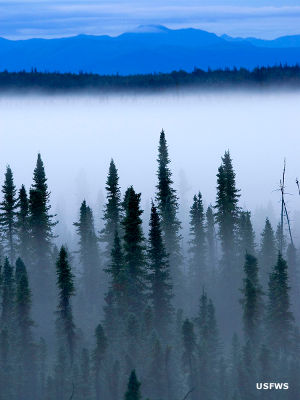 Fog in the forest...

The 1.92-million-acre Kenai National Wildlife Refuge is located on the Kenai Peninsula of southern Alaska. The property began life as the Kenai Moose Range back in 1941 but became the Kenai NWR as part of the Alaska National Interest Lands Conservation Act of 11000. At the same time, about 2/3 of the property was designated as the Kenai Wilderness Area.

The property offers a wide variety of terrain with high, rugged mountains, glacier-carved valleys, deep rivers and lots of muskeg and other wetlands. The vegetation varies from white and black spruce taiga forest to alpine tundra.

Kenai National Wildlife Refuge is a world-renowned site for hunting black bear, brown bear, moose, Dall sheep and caribou. It's also well known for the salmon and trout fishing. Among the birds, well... hundreds of species are represented in the thousands of birds who return here year after year to hatch and raise their young, feeding on the plentiful vegetation and insect life.

Except for the retreat of the Harding Ice Field, Kenai is still pretty much as it was 10,000 years ago when the whole area was buried under glaciers. That has made Kenai a veritable "miniature Alaska" with all of Alaska's major habitat types (and wildlife species) available on the peninsula. The Harding Ice Field still covers some 800 square miles of land in the high Kenai Mountains of the eastern peninsula. In its center, the ice is still several thousand feet thick. As timberline in this area tends to run around 1,800 feet in elevation, there are expansive areas of alpine and subalpine tundra between the tall trees and the ice. The subalpine zone, in particular, tends to be shrubby. 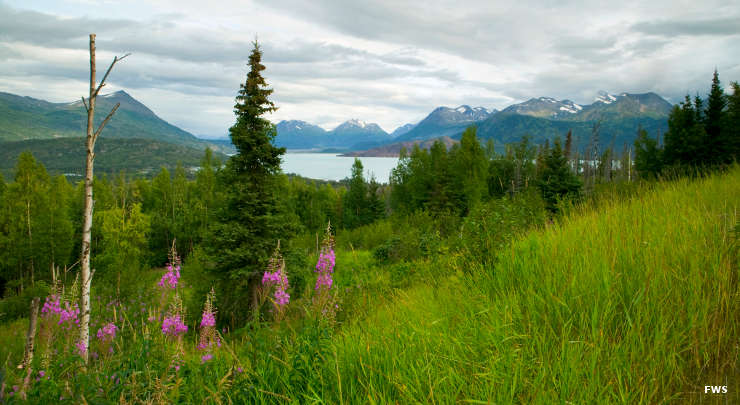 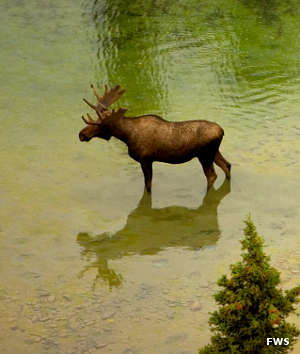 Kenai Wilderness contains 1,354,247 acres of gorgeous terrain inside Kenai National Wildlife Refuge. Contained in the wilderness are the western slopes of the Kenai Mountains (topping out at 6,612') and their attendant ancient glaciers, nine glacier-fed river systems and the birch-spruce lowland forest extending inland from the shores of Cook Inlet.

As the property is accessible via the Sterling Highway, there are several campgrounds and boat launches available. The campgrounds at Hidden Lake and Skilak Lake are actually nicely developed. There are more than 200 miles of established hiking trails in the wilderness, in addition to an extensive system of canoe trails. Motorized boats are allowed on the larger lakes but not on the rivers or smaller streams that make up the canoe trail system.

Camping is allowed everywhere but the usual "leave no trace" rules prevail. Unless you get into the far outback, you probably won't come across many brown bears. If you do camp overnight, you'll probably hear the local wolves howling away the night... and what you will find everywhere are huge black clouds of flying/biting insects. Also because of that easy access and the world-wide reputation, Kenai National Wildlife Refuge is probably one of Alaska's top tourism draws.

To get there: Take the Seward Highway south from Anchorage, crossing Chugach State Park and Chugach National Forest. At milepost 55 you'll come to the eastern boundary of Kenai NWR. Another five miles will bring you to the Visitor Contact Station (open 7 days a week, 8 am to 5 pm, Memorial Day through Labor Day). The actual Visitor Center and refuge headquarters is located in Soldotna on Ski Hill Road (off Funny River Road). 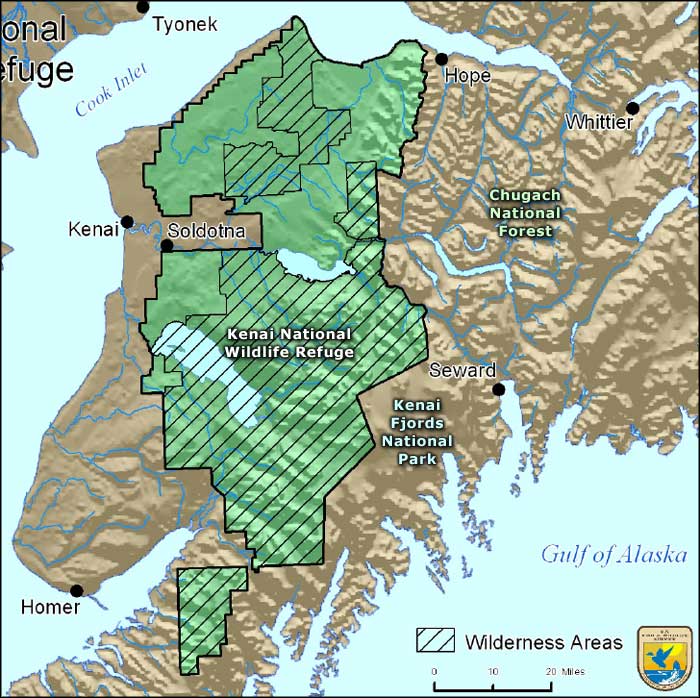