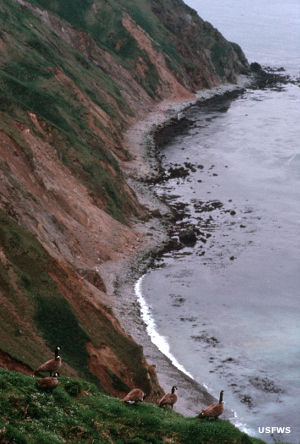 The Alaska Maritime National Wildlife Refuge has a total area of about 4.9 million acres that include 2,500 islands stretching from the western end of the Aleutian Islands across the southern reaches of offshore Alaska to Forrester Island in the southeastern Alaska panhandle region. This is an amalgamation of what formerly was ten different National Wildlife Refuges and Wilderness Areas. Today, about 2.64 million acres of the Alaska Maritime National Wildlife Refuge is designated wilderness. Somewhere between 15 and 30 million Alaska native birds use the refuge. In addition, about 40 million migratory seabirds use the refuge in the warmer months for nesting and feeding purposes. The waters in this refuge also contain whales, walrus, sea lions, seals and sea otters.

The landscape here is a mix of steep, stark mountains and sea cliffs interspersed with boreal forests and war relics from World War II. You'll find volcanoes venting steam, great forests of kelp, rocks, reefs, islets, spires, waters and headlands. Traveling across this property is the equivalent of traveling from California to Georgia. Some areas aren't too hard to get to but most of this National Wildlife Refuge is only for the deep-of-pocket and intensely-driven. In many areas along the mainland it is fairly easy to charter flights in small aircraft but landing on any of these islands... that's a whole other world: a bit better than half the surface area of the refuge is designated wilderness and motorized vehicles of any sort are forbidden. There's also the problem of flying into the huge flocks of birds that an aircraft is going to stir up... both coming and going.

Many of the native birds on these islands occur nowhere else on the planet. The introduction of foxes and shipwrecked rats has been catastrophic in some areas. The Aleutian Canada goose was a listed endangered species until the Fish & Wildlife Service succeeded in removing fox from about 1 million acres of the goose habitat. And rats are an even greater threat to the wildlife than oil spills in the area. When a shipwreck happens around here, the first team on-site is usually the "rat spill" response folks.

Located along the Pacific Ring of Fire, the Alaska Maritime National Wildlife Refuge also includes most of the active volcanoes in the United States. The video linked below is an excellent exposition and tour of the Alaska Maritime National Wildlife Refuge as experienced from the perspective of the Tiglax: a research vessel designed purely for exploring, mapping and observing the refuge.

The Alaska Maritime National Wildlife Refuge is also home to the Aleutian Islands Unit of the World War II Valor in the Pacific National Monument.

About 1.3 million acres of the Alaska Maritime National Wildlife Refuge is contained in the Aleutian Islands Wilderness. The wilderness area contains more than 200 islands, all peaks of about 57 submarine volcanoes. Some of the islands just barely rise above the water at high tide, others rise more than 9,000 feet from the water's edge.

Another 81,340 acres of the 170,000-acre Bering Sea Unit is contained within the bounds of the Bering Sea Wilderness. Central to the wilderness are St. Matthew, Hall and Pinnacle Islands, summer home to more than 3.5 million seabirds. Geographically, the Bering Sea Unit is among the most remote property in America, volcano-formed and shaped with sheer cliffs rising up to 1,500 feet above the water and waterfalls dripping forever down the cliffs.

Bogoslof Wilderness contains another 175 acres of Alaska Maritime National Wildlife Refuge in the area north of Unalaska Island. Bogoslof and Fire Island were pushed above the waves during a volcanic eruption around 1796 and the volvano that began it all is still active with changes occurring as recently as 1993. The property is very hard to access and doesn't see even one ship a year.

Chamisso Wilderness is a 455-acre property encompassing Chamisso and Puffin Islands in the Chuckchi Sea Unit of Alaska Maritime National Wildlife Refuge. Chamisso Island is relatively flat and rises above the water only a bit while Puffin Island offers seabirds some mighty cliffs to work with.

Forrester Island Wilderness is a 2,832-acre property in the Gulf of Alaska Unit of Alaska Maritime National Wildlife Refuge. Contained in the wilderness are Forrester Island, Lowrie Island and Petrel Island. The location is the southernmost point in Alaska at the end of the Alaska panhandle. Forrester and Petrel Islands are heavily forested in the temperate rainforest of Tongass National Forest while Lowrie Island is flat and treeless. Travel on the islands is extremely hard owing to the thick carpet of undergrowth and the rocky nature of the broken ground. Don't visit in the spring as virtually all available soil is undercut with egg-laying burrows: everywhere you step you might be cracking eggs and destroying lives.

Hazy Islands Wilderness is a 32-acre property well offshore in the Gulf of Alaska Unit of Alaska Maritime National Wildlife Refuge. The wilderness is composed of Big Hazy Island and four smaller islets that offer predator-free nesting areas for multitudes of gulls, puffins, murres and Brandt's cormorants. the islands offer humans no campsites or anchorages, no firewood, no break from the prevailing winds or the storms...

St. Lazaria Wilderness is a 65-acre property located in the entrance to Sitka Sound. St. Lazaria Island has two summits, neither rising more than about 180 feet above the waves but the saddle between the two is washed by the waves at high tide. Most of the island is heavily treed and the island edges drop over sheer cliffs straight into the sea.

The Semidi Wilderness is a 250,000-acre property in the Alaska Peninsula Unit of Alaska Maritime National Wildlife Refuge. The Semidi Islands are made up of nine major treeless and ragged rocky islands plus numerous small rocks and islets. Fully half the breeding shorebirds and waterfowl in Alaska can be found in the Semidis but getting to the islands can be tricky. The land mass of Semidi Wilderness isn't that much but it adds up when combined with another quarter-million acres of surrounding seabed. Couple that with the stormy Gulf of Alaska, poorly charted waters and frequent wind and rain storms and you can see why the Semidis see very few people during a normal year.

Simeonof Wilderness is a 25,855-acre property covering most of Simeonof Island in the Shumagin Group in the Alaska Peninsula Unit of Alaska Maritime National Wildlife Refuge. The island was occupied by some cattle and fox ranchers from 1890 to about 1930 when they abandoned the island. Cattle were returned to the island again in 1960 but the herd was soon too large for the island's resources to support and the cattle were again removed, the last one leaving in 11005. Unusual among Alaskan islands, Simeonof Island offers a good, protected anchorage but the island is 58 miles offshore from the mainland...

Tuxedni Wilderness is a 5,566-acre property that includes the land mass of two islands in the mouth of Tuxedni Bay: Chisik and Duck. The majority of the wilderness area is on Chisik Island as Duck Island is basically a 6-acre barren rock stuck out of the water. Chisik Island offers sandy beaches on its Cook Inlet side but rises to 400-foot cliffs on its northern side. A cannery operates in a small non-wilderness area on the south side of the island. The island is heavily forested in hemlock and spruce with a thick understory of alder, salmonberry and other brushy undergrowth. The higher elevations are alpine tundra with great views. Camping is allowed everywhere except within 200 feet of water. There are no trails. The island is sometimes accessed via boat or floatplane but rough water and sudden blasts of wind can make that risky. Hunting is not allowed so most folks come for the salmon.

Unimak Island offers a 910,000-acre wilderness covering about 93% of the island. Unimak Island is also home to Shishaldin, the world's visually most perfect stratovolcano. At 9,372 feet it is the highest point in the Aleutian Islands. Gathered around Shishaldin are other high peaks, most former volcanoes, most now snow and ice covered. Shilshaldin and two other volcanoes are rated as active with steam venting daily and recent belches of lava and ash. The island's coastline offers steep bluffs, wetlands and black rock beaches. There is almost no tree cover and no trails. There is no firewood away from the driftwood on the beach. There are plenty of brown bears, wolves, caribou and wolverines. In season the island plays host to millions of nesting families of waterfowl and shorebirds. The wilderness is accessible via sea kayak and once ashore, all you can see is the rolling tundra, muskeg, wetlands and mountains... 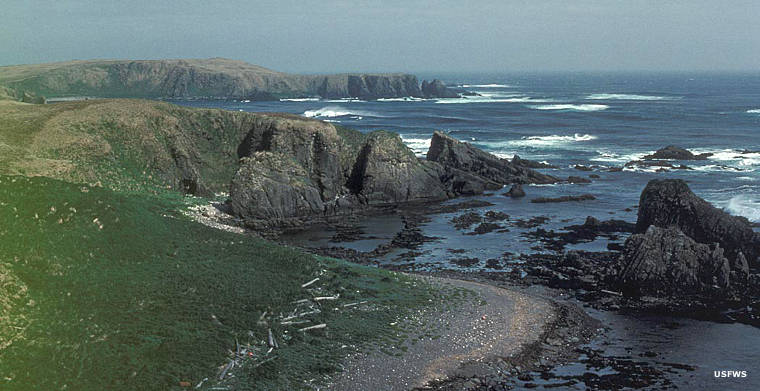 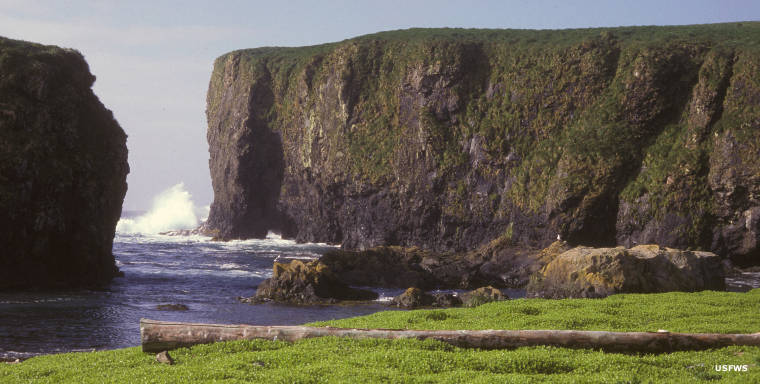 In the Aleutian Islands

Castle Cape, on the Alaska Peninsula 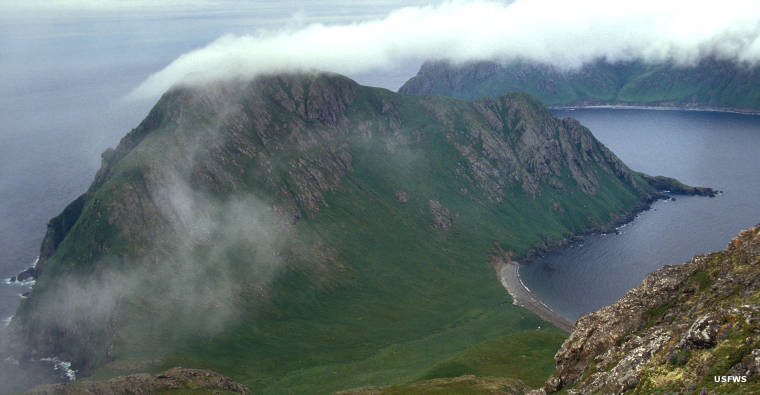 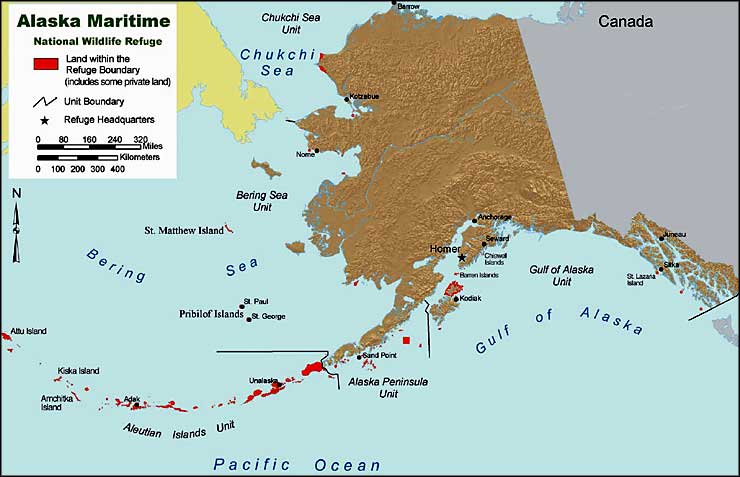