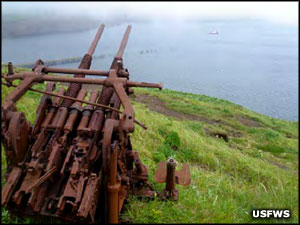 The Aleutian Islands Unit of the World War II Valor in the Pacific National Monument is contained entirely within the boundaries of the Alaska Maritime National Wildlife Refuge, Aleutian Islands Unit and is administered cooperatively with the US Fish & Wildlife Service. The Aleutian World War II National Historic Area on Unalaska is a separate entity and is managed by the National Park Service in cooperation with the Unangan people.

The primary sites of the Aleutian Islands Unit of the World War II Valor in the Pacific National Monument are on Attu, Kiska, Little Kiska and Atka Islands. 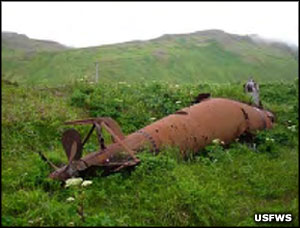 The sites on Kiska and Little Kiska Islands offer artifacts (anti-aircraft guns, coastal defense cannons, sentry emplacements, underground structures, invasion beaches etc.) scattered in places around the island but mostly close to Kiska Harbor. Along the shorelines you'll also find the wreck of a sunken ship (the Nozima Maru, sunk in Kiska Harbor) and the remains of a Japanese mini-sub. On Kiska is also the remains of a crashed PBY-5A aircraft.

At the time of the Japanese invasion of Kiska in June, 1942, the island was occupied by a ten-man weather crew stationed there by the US Navy for obvious reasons. There wasn't much for fighting happening during the invasion but some of the crew did scatter across the island and one man, Aerographer's Mate William Charles, eluded capture for 50 days before turning himself in to the Japanese. All were transported to Japan as prisoners of war and were released after the war ended.

The wreckage of a B-28 Liberator bomber

The lone site on Atka Island offers the remains of a B-24D Liberator bomber that crashed on the island in December, 1942 during foggy weather. The site is about 5 acres in size and contains the remains of the crashed aircraft and surrounding site.

There are several sites on Attu Island offering more cannons, sentry emplacements and relics of the battlefield, the only land battle fought on American soil during World War II. Preserved as part of the Unit is Jarmin Pass at the head of Massacre Valley, scene of some of the bloodiest fighting in the Battle of Attu.