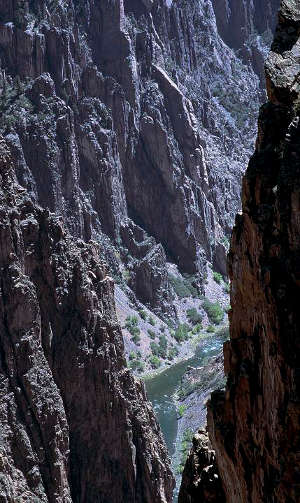 There are two entrances to the park: the South Rim, about 15 miles east of Montrose, and the North Rim, about 11 miles south of Crawford. The South Rim area is the more developed and is open year round while the North Rim sees a lot less people and is closed in the winter. The canyon got its name because it is so steep that for most of the year, sunlight never reaches the bottom. For comparison, the Colorado River drops an average 7.5 feet per mile as it flows through the Grand Canyon. The Gunnison River drops an average 43 feet per mile as it flows through the whole of Black Canyon, 96 feet per mile within the National Park. At the Narrows, the Gunnison drops a whopping 240 feet per mile. That makes rafting the Gunnison River through the National Park an adventure only for the best and most experienced. And even for the most experienced, valor and the wish to survive require long, dangerous portages around several stretches of impassable water. Another comparison: the Gunnison River drops more than 4,600 feet in the 48-mile pass through the canyon. The Mississippi River drops half that in its entire 1,500-mile length.

The majority of the gneiss and schist that makes up the walls of the canyon were formed about 1.7 billion years ago. The lighter-colored pegmatite dikes that cross-cut and intertwine with the gneiss and schist were injected a bit later (1.4 billion years ago) in a process with such heat and pressure that the whole of the rock was metamorphosed. Then the area was pushed upward as part of the general Colorado Plateau-Gunnison Uplift during the Laramide Orogeny, around 65 million years ago. There was significant volcanism in the area and the West Elk Volcano formed to the northeast with the waterflow of the Gunnison River skirting that on the south and west. During that time span, several thousand feet of volcanic ash and debris were added to the surface of the land. About 15 million years ago, the Gunnison River settled into the path that we see today, eroding its way down through the softer volcanic deposits until it came to the much harder metamorphic basement rocks of the pre-Cambrian ages. At that point, the river didn't have a choice: it began eroding its way into that as well. Back then, the area was much wetter and the river's flow much higher. Between the hardness of the rock and the flow of the water, the Gunnison inched downwards at the rate of about 1 inch per hundred years. That has resulted in the steep, sharp canyon we see today with places at the bottom where the rock walls are only forty feet apart.

Most folks who visit Black Canyon of the Gunnison National Park, visit the South Rim where there is a Scenic Drive along the rim offering several beautiful overlooks. There is also a developed campground and several miles of hiking trails. The north rim has a small primitive campground and a few trails with spectacular views. There is a trail down into the canyon from the north rim but most folks spend about four hours going down and six or more hours coming back up. The trail is very steep and essentially unmaintained. Other folks make the journey to the river and back by technical-climbing the walls of the canyon. The climbing is difficult and only for the very advanced.

Sunrise over the canyon 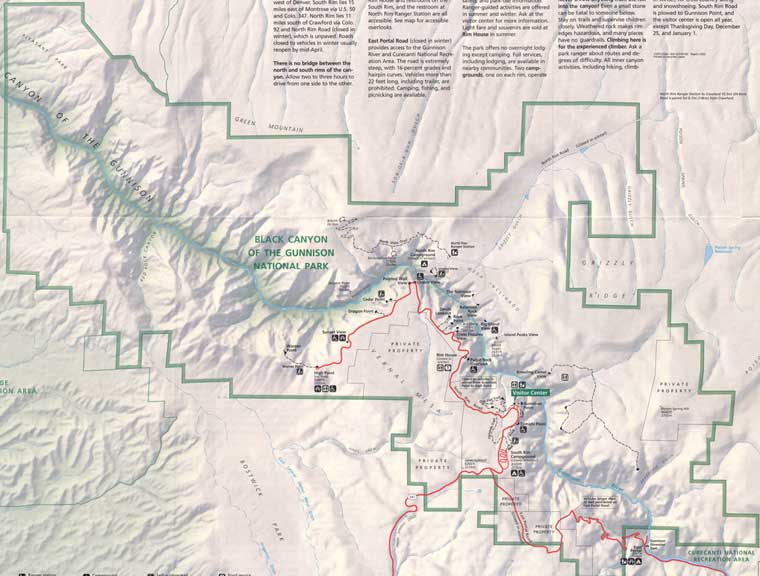