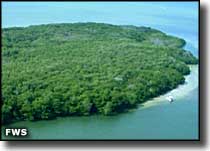 Pine Island National Wildlife Refuge was created by Executive Order #939 signed by President Theodore Roosevelt on September 15, 1908. The refuge is located in Pine Island Sound south of Charlotte Harbor, between Sanibel and Pine Islands on the southwest coast of Florida. Since its creation, the refuge has expanded to encompass some 500 acres on more than 17 islands. On Benedict Island is a shell mound, built by the Calusa Indians back around the time the first Europeans arrived in the area.

Most of the vegetation on these islands is of the red and black mangrove persuasion with only a bit of uplands habitat. The primary mammal found here is the raccoon, while sea turtles, manatees and dolphins are often seen in the surrounding waters. Among the bird populations you'll find wood storks, bald eagles, Brown pelicans, egrets and herons. Some of the larger islands also have small colonies of gopher tortoises living on them.

Access to the waters around the islands is by boat only, however, the islands themselves are closed to the public. Something else to watch for in the area are oyster bars and fragile seagrass beds. As this is part of the Charlotte Harbor estuary, shifting sand bars and shallow waters make this a difficult area for safe navigation.