One of the islands in the Matlacha Pass National Wildlife Refuge 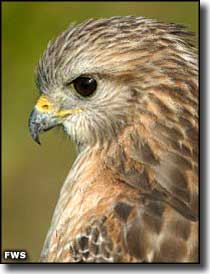 The majority of the habitat is mangrove swamps and upland sand ridges. Among the vegetation covering these islands you'll find cabbage palm, buttonwood, seagrape, Florida strangler fig, gumbo limbo and red, white and black mangrove. All the islands of Matlacha Pass NWR lie between Pine Island and Cape Coral.

Once upon a time, one of the largest islands in the group (Fisherman Key) had permanent residents and fish camps on it, but most of the islands have been used only by migratory birds since time immemorial. This is prime osprey habitat, although the property is also a preserve providing protected habitat for wood storks, bald eagles, manatees and sea turtles.

Access to the waters around the islands is by boat only, but the islands themselves are closed to the public. With numerous oyster bars, fragile seagrass beds and shallow back bay waters, safe navigation in the area is quite difficult.