One of the three ponds at Two Ponds National Wildlife Refuge 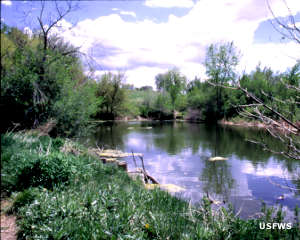 Once upon a time, this countryside was typical High Plains shortgrass and mixed grass prairie, but that habitat was altered by invading human pioneers who plowed the prairie sod to grow crops and allowed their cattle and sheep to roam the area while grazing. Then came the aftermath of World War II and a huge influx of people to the Denver Metroplex. Very quickly, this beautiful area to the northwest of the city proper was urbanized and housing developments sprang up all over. Finally, the Two Ponds Preservation Foundation was founded and began the effort to preserve at least one small vestige of the Colorado-that-was for the wildlife that remained.

The riparian areas of the refuge are filled with milkweed, bulrushes, cattails and willows while the upland areas tend more to the brome grass and needle-and-thread grass side of things. In most areas you'll also find prickly pear, yucca and rabbitbrush. The canals and ponds in the area are lined with mature cottonwoods and there are a few apple trees, ornamental trees and decorative shrubs around to remind us that people once homesteaded this property, too. For wildlife there are mule deer, red foxes, coyotes, beavers, muskrats, raccoons, squirrels, rabbits, voles, turtles and more than 120 species of birds.

To get there: Two Ponds National Wildlife Refuge is located on the south side of 80th Avenue between Wadsworth and Kipling Boulevards in Arvada. For more information, there is a kiosk at the entrance to the property next to the parking area.

In the Environmental Education Zone at Two Ponds 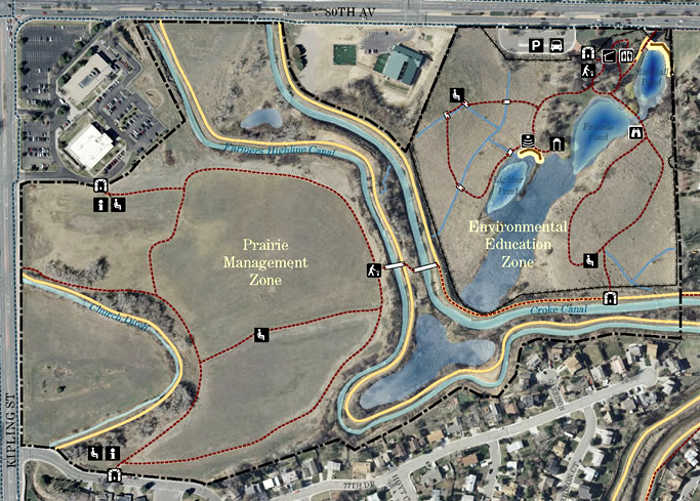