Long's Peak in the distance, from an overview along the road 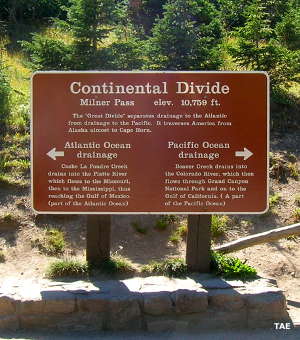 Rocky Mountain National Park straddles the Continental Divide in north-central Colorado. The western side of that dividing line gets about twice the annual precipitation (and humidity) as the eastern side. However, the 5 drive-in campgrounds, more than 200 back-country campsites and the 359 miles of trails are pretty evenly dispersed across this high country paradise. Elevations vary from about 8,000' in the low valleys to 14,259' at the top of Long's Peak. There are more than 60 named peaks that rise above 12,000' and more than 1/4 of the park is above timber line. Several of the high mountain cirques hold small glaciers and permanent snowfields.

This was Ute country until the early 1800's. They never lived here year-round but this was prime fishing and hunting country for them. Gold miners first arrived in the 1850's and a few ephemeral settlements were thrown up and then abandoned when the ore bodies quickly gave out. Homesteading really got started here in the 1860's but this was never good grazing or farming country. On the other hand, the water that flowed from here was more valuable than gold and there were many ventures involved with diverting that water to the growing Front Range towns even back then.

The view east near the top of Trial Ridge Road

Rocky Mountain National Park came into existence in January, 1915. The countryside was dotted with private property and many private owners ran small lodging and vacation establishments. Roads were primitive, few and far between. There was never a railroad built to service anything in the park so real transportation construction didn't happen until the days of the Civilian Conservation Corps. The National Park Service used those young men to build Trail Ridge Road, the first professionally designed auto route in Rocky Mountain National Park. The 1960's saw the construction of visitor centers at Alpine, Kawuneeche and Beaver Meadows.

Today, Rocky Mountain National Park is one of the crown jewels of the National Park system. Of the 5 campgrounds, 2 require reservations while the other 3 are first-come, first-served (and the campgrounds tend to be full all season long). The 200+ back-country campsites all require a permit for use. Trail Ridge Road is only open from the end of May to mid-October (the road is just not plowed in the winter).

If you want to climb Long's Peak, you want to start out really early: each route to the top has its own bottleneck and those bottlenecks plug up quickly on a beautiful summer day. As I drove across Trail Ridge Road, stopping to take photos, I was asked several times how to get over to Long's Peak. Long's Peak rises above Wild Basin in the southeastern corner of the park. Below Estes Park on State Route 7 you'll find Long's Peak Road, it's classed as a Class 5 primitive road: 4x4 with high clearance required. If you make it to the end of the road, you still have a couple miles to hike before you actually start up the hill at the foot of Long's Peak.

Long's Peak was named for Major Stephen Long, leader of the 1820 Long Expedition. The Long Expedition visited the area but never entered the mountains. Joel Estes and his son were hunting on the east side of what is now the National Park and stumbled across the area now known as Estes Park. The family moved there in 1860 and tried to raise cattle. By 1866, the Estes family was forced out by the harsh winters. In 1873, Isabella Bird arrived in the area and stayed in Estes Park for several months. During her visit she became the first woman to climb Long's Peak. Enos Mills arrived in 1884 as a 14-year-old. He grew up exploring the mountains and valleys here, writing many articles and several naturalist books about the area. It was his lobbying efforts that finally got Congress to pass a bill for President Woodrow Wilson to sign in 1915 that created Rocky Mountain National Park. Over the years the boundaries of the park have been expanded with the eastern slopes of the Never Summer Range (the largest parcel) being added in 1929.

A view from Trail Ridge Road

Another view from Trail Ridge Road