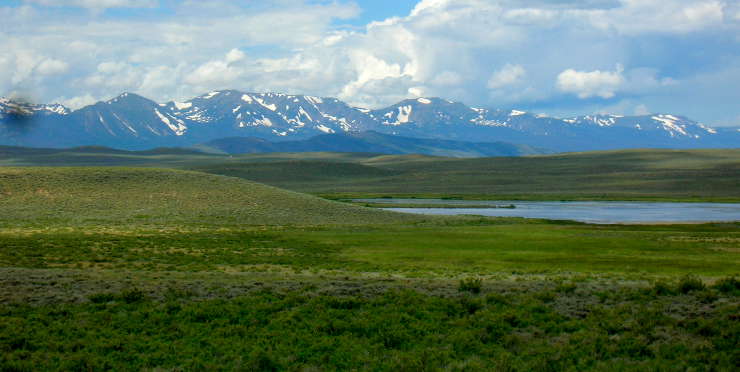 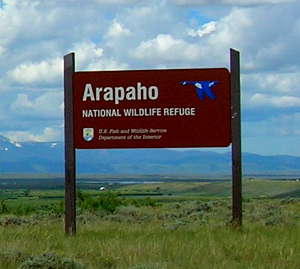 Located in the 35-mile by 45-mile basin in the center of North Park, Arapaho National Wildlife Refuge contains 24,804 acres of wetlands, riparian areas, grassland meadows and sagebrush-grassland upland habitats. This is a very diverse property that caters to elk, mule-tail deer, black bear, bobcat, mountain lion, muskrat, beaver, pronghorn, coyote, porcupine, red fox, long-tailed weasel, mink and moose but most folks come to visit and see all the migratory bird species that flock through this area in spring and fall.

North Park is a huge glacial basin in northern Colorado with high mountains on all four sides. Arapaho National Wildlife Refuge sits on the floor of the basin where you'll find numerous meandering streams that eventually come together as the headwaters of the North Platte River. A lot of the property is flood plain, often irrigated by refuge staff to provide forage for migratory birds in the fall. At a mean elevation of 8,200', summer here is warm but short, winter long and cold. In the old days, the Utes used this area as prime hunting territory but once the snow started to fly, they left and headed down the hill for better weather. The first European recorded to have been in the area was a French fur trapper named Jacques Bijeau in 1820. He came for the beaver but he didn't stay long. Kit Carson visited a few years later, also trapping furs, and he brought Lieutenant John C. Fremont through here in 1844 on their way to California. Fremont wrote that North Park was a veritable paradise for wildlife.

This part of Colorado is classed as a semi-arid climate, so a lot of staff time is spent controlling water flows in a complex system of ditches that irrigate meadows and riparian areas and keep the waterfowl brood ponds full.

Wildlife observation and photography are the big things here but fishing and hunting (in season, with appropriate Colorado state licenses) is allowed. Most folks fish the Illinois River but be aware that some areas are posted as "Closed." The fishing is very good but you might have a hard time getting through the dense willow thickets to reach the water's edge. The river carries a good population of brown trout but there are a few brookies and rainbows, too. All fishing is closed on the refuge from June 1 through July 31 so as not to disturb nesting waterfowl.

The auto tour is a self-guided, six-mile route with observation points and interpretive displays along the way. The refuge also offers the Brocker Overlook with another large interpretive display. Near the visitor center you'll also find a nature trail.

Arapaho National Wildlife Refuge is open for day use only. Certain roads are designated for public use but they are not snow-plowed and tend to be closed once the snow starts coming down (December through April). Camping and campfires are not allowed anywhere on the property.

To get there: take Highway 125 south from Walden for 8 miles, then turn east on County Road 32 and go 1 mile to the refuge headquarters and visitor center. Four miles south of Walden on Highway 125 is where you'll see the signs for the Arapaho National Wildlife Refuge auto tour route. Turn west at the sign and just follow the road.

Looking west across Arapaho NWR to the Park Mountains 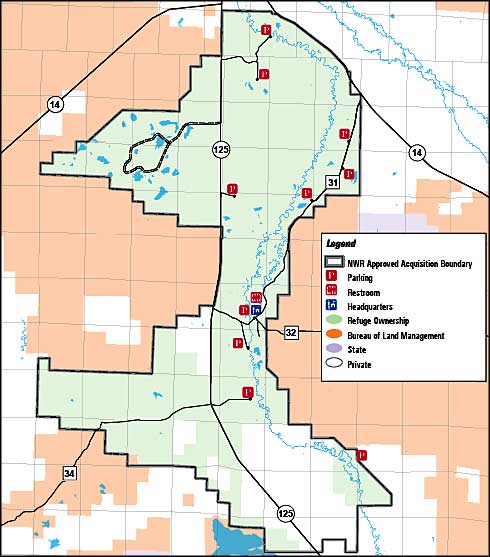