The view downhill from Jerome 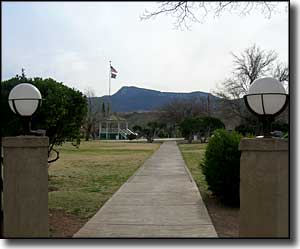 The Jerome, Clarkdale & Cottonwood Historic Road is a 10-mile route on State Highway 89A tying together three historic towns. Jerome is the site of a couple former major copper mines. Clarkdale was built to house the workers for the processing mills that were fed by the copper mines at Jerome. Cottonwood was where the ranchers, farmers and other business people established themselves, outside the confines of the company towns.

This is an area of different life-zones with extensive views of the red rock country to the north. From Jerome, the volcanic form of Kachina Peaks is visible in the distance, across the great red-and-buff-sandstone/desert valley. Up the hill above Jerome is Woodchute Wilderness. Between Clarkdale and Cottonwood is Tuzigoot National Monument with the ruins of an ancient Sinagua pueblo. And the Sinagua who lived in the area from about 1125 to about 1400 CE were not the first to live here. There is evidence of an earlier Hohokam settlement in the area. But with that usual American flair, most history is dated from the first discovery of huge copper ore deposits beneath Jerome. That copper was mined heavily for about fifty years, originally using underground shafts but when those collapsed, the mining method shifted to giant open pit processes. Today, the biggest industry in the area (other than tourism and retirement communities) is a giant cement plant outside Clarkdale, originally built to provide materials for the construction of Glen Canyon Dam.

I've driven through this area more than a few times over the years. Route 89A is a reasonable road but most folks are in too much of a hurry to get somewhere to allow someone like me the time to rubberneck and gawk... so the last few times I've driven down the hill from Jerome I got off the main road and went through the center of Clarkdale to the center of Cottonwood. A much more satisfying and pleasurable drive. Down there is where I found the real stuff I wanted to see anyway.

These days, Jerome is a very arts-and-crafts type of tourist town. I've found some beautiful art works, custom clothing and jewelry there. If the weather is good, it's hard to find good parking (being well up on the hill, the temperature runs somewhat cooler than in Phoenix or even Cottonwood or Sedona). The route is very twisted through town with several switchbacks before it descends and passes the entry road to Jerome State Historic Park (the old Douglas Mansion, James Douglas having been the owner of one of the bigger copper mines in the area). When I first passed through Jerome the town was little more than a ramshackle ghost town but it's looking much better now.

Clarkdale was a master-planned town, built by William A. Clark (who was also one of the copper barons of Butte, Montana). Clark owned the United Verde Mine and built his major ore processing plants just outside Clarkdale at the foot of the hill below Jerome. Clark also built what is now the Verde Canyon Railroad to haul his processed ore out to the main railroad lines to the north. These days, the Verde Canyon Railroad is a scenic railroad that offers a good ride through some gorgeous countryside. The main railroad depot is off downtown Clarkdale.

The back road between Clarkdale and Cottonwood leads past Tuzigoot National Monument, Dead Horse Ranch State Park and most of the Verde River Greenway before it reaches Cottonwood. And it empties into Cottonwood in the heart of the historic downtown area. Most folks driving SR 89A never see this part of town.

Cottonwood was founded on farming and ranching, not mining, although in the days of big mining, Cottonwood did allow the operation of a few speakeasies, gambling dens and houses of ill repute. There are some great examples of "Craftsman-style" architecture in Cottonwood but most of today's business seems to be getting conducted in the newer areas of town: where the residential subdivisions, shopping malls and major highway crossroads are.

Jerome is where the Mingus Mountain Scenic Road and Jerome, Clarkdale & Cottonwood Historic Road meet. Continue northeast out of Cottonwood on SR 89A and you'll soon come the the western end of the Dry Creek Scenic Road. If you choose to continue south out of Cottonwood and head for the Interstate, just across that highway is Camp Verde and Fort Verde State Historic Park. 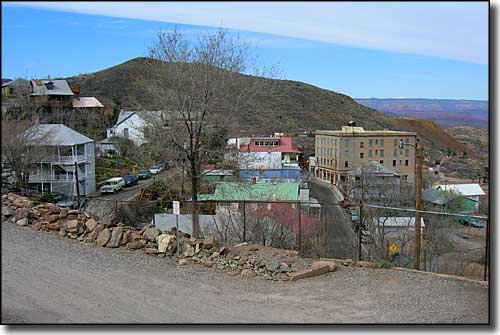 Switchback in Jerome, on the Jerome, Clarkdale & Cottonwood Historic Road 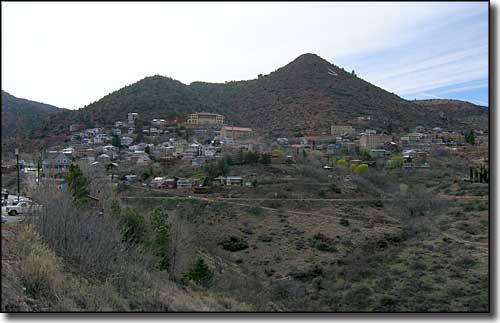 Jerome, from halfway to Clarkdale

At the Verde Canyon Railroad station in Clarkdale