Located in the lower Colorado River floodplain and surrounded by desert, Cibola National Wildlife Refuge is primarily a migratory bird sanctuary. Cibola NWR straddles the state line between California and Arizona, incorporating the main Colorado River channel and other constructed and natural waterways into its wildlife management efforts. A lot of Fish & Wildlife personnel effort is put into habitat restoration and regularly flooding old river meanders and backwaters. After all, this oasis in the desert often sees 120°F temperatures in the summer, it usually receives maybe 2 inches of precipitation in an entire year and there are many native species in this desert that could use the help.

Cibola NWR is one of the last major southern stops for migratory birds flying the Pacific Flyway. More than 280 species of birds have been recorded here, among them sandhill cranes, Canada and snow geese, golden eagles, Gamble's quail, roadrunners, grosbeaks, snowy egrets, the endangered Southwestern willow flycatcher and Yuma clapper rail, and multiple species of ducks.

The refuge is managed in such a way as to provide both open waters for the birds that need them and shallow wetlands and marshes for the shorebirds and wading birds who prefer that. Adjacent to the wetlands, the fields are often plowed and seeded with grasses and grains, then left for the wintering flocks to enjoy. Away from the water you might also come across coyote, mule deer, bobcat, cottontail rabbit and the endangered desert tortoise. The seriously endangered desert pupfish and the endangered bonytail chub and razorback sucker also occur naturally in this area, so fishing may be forbidden in certain water impoundments. If you do go fishing, though, you'll find plenty of tilapia, sunfish, carp, crappie, channel and flathead catfish and largemouth, smallmouth and striped bass.

In the main channel of the Colorado you can boat and water ski to your heart's content, but the Old River Channel, Three Fingers Lake, Cibola Lake, Hart Mine Marsh and all the other backwaters of the refuge are "no wake" zones. Don't get caught trying to disturb or remove any plants or animals on the property. You also don't want to be found digging, defacing, removing or damaging any minerals, rocks, stones or "objects of antiquity" either. Hunting for specific species in specific areas is allowed (proper licenses and weaponry only).

To get there: the easiest way in is from exit 78 on Interstate 10 (that's about 3 miles west of Blythe). That'll be Neighbours Boulevard, and you'll want to go south on that for 12 miles to the Cibola Bridge. Cross the Colorado on Cibola Bridge and go south for 3.5 miles more to the refuge headquarters. The only restrooms and drinking water are at the Visitor Center. There are no gas stations, restaurants or convenience stores, no camping, no campfires... we are guests in the home of wildlife and they want us to go to our own homes at night... and take our trash with us.

The Visitor Center is open Monday through Friday, from 8 am to 4:30 pm. The center offers interpretive displays and refuge information, including up-to-the-moment road closures and water conditions. Near the visitor center is the beginning of the three-mile auto tour loop (just look for the Canada Goose Drive sign). The road, like the refuge, is open from 1/2 hour before sunrise to 1/2 hour after sunset. Along the loop drive you'll find a 1-mile nature trail loop that leads to an elevated observation deck where you can look out over thousands of Canada and snow geese, sandhill cranes and ducks around a 20-acre pond. There is another overlook and elevated cliff over Cibola Lake at the southern end of the refuge where you can watch ducks, grebes, pelicans, cormorants, geese and terns, although most of the Cibola Lake area is closed to the public from Labor Day to March 15 so the wintering waterfowl don't get disturbed (the overlook is far enough back that folks can be there and watch safely).

Wetlands in the dry season at Cibola NWR 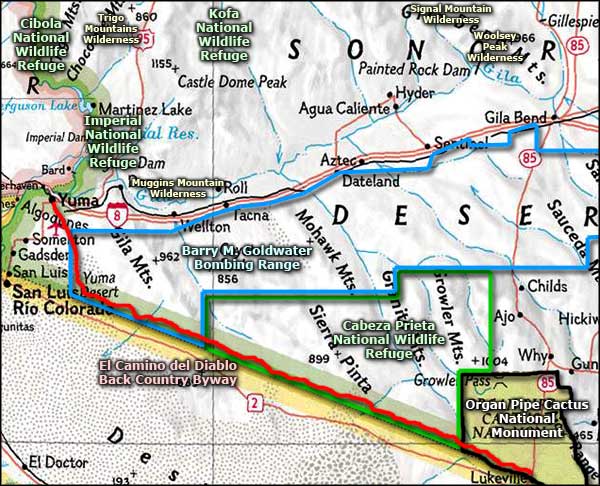