Mesa Falls Scenic Byway is a 29-mile route mostly within the boundaries of Caribou-Targhee National Forest. Along the way, you'll pass by both Lower and Upper Mesa Falls, the last sizable undisturbed (and otherwise unprotected) waterfalls in the American West. They are the only waterfalls of consequence in Idaho that have not been harnessed for producing hydroelectric power or to provide water for irrigation projects.

Upper Mesa Falls is a 114-foot drop over a sharp edge of compressed volcanic ash. The area has been developed with universally accessible footpaths and viewing areas. Between 1912 and 1916, the Mesa Power Company built the Big Falls Inn and Stage Stop near Upper Mesa Falls. Now known as Mesa Falls Lodge, the structure has been renovated and is now open seasonally as an interpretive center and visitor rest stop.

Lower Mesa Falls is a 65-foot drop between basalt columns where the river has been squeezed into a narrow gorge. The best view of Lower Mesa Falls is from the overlook at Grandview Campground, a site with nine developed campsites that was constructed in the 1930's by the Civilian Conservation Corps.

Heading north from Ashton, you'll first be traveling through fields of barley, wheat and potatoes. Then you'll enter Caribou-Targhee National Forest and begin the descent into Three Rivers Canyon. The name comes from Henrys Fork of the Snake, Robinson Creek and Warm River, all of which merged to create the gorge. The Henrys Fork is under consideration to become a National Scenic & Wild River so as you travel, you might see whitewater sports enthusiasts flashing past in the water...

On the edge of the Yellowstone Caldera

Looking down on Lower Mesa Falls

This is an area of thick Ponderosa pine and Douglas fir forest. You might come across herds of moose, elk and deer in these woods but what you need to look out for are grizzlies. Grizzlies have been reintroduced to the Yellowstone Ecosystem and they are thriving. Just to the east is Winegar Hole Wilderness, an area specially set aside for the breeding and nurturing of grizzly bears.

The road will rise up and cross over the edge of the Yellowstone Caldera, then drop back down along the Henrys Fork to pass near both waterfalls. Beyond the waterfalls is more beautiful driving through spectacular forest with views of the Grand Tetons to the southeast and of the Centennial Mountains to the north.

To get there: Ashton is on Idaho Highway 47. For 12 miles you'll be following Idaho 47 through the town of Warm River to the site of the old Bear Gulch Ski area. There you'll turn left and travel north on Forest Service Road 294 until you reach its northern end at US Highway 20. FSR 294 is not plowed in the winter so it makes for an excellent snowmobile/cross-country skiing trail once the snow gets deep enough. There are more than 500 miles of other snowmobile and ski trails in the area, too. The northern end of FSR 294 is near one of the entrances to Harriman State Park, just south of Island Park.

I drove the Mesa Falls Scenic Byway in late May, 2016, traveling south to north. It was not a busy road and everything was well-marked. I didn't come across traffic until I reached Island Park, just west of West Yellowstone and the entrance to Yellowstone National Park. The road was in very good condition and the views were great, especially in the area of Upper Mesa Falls. 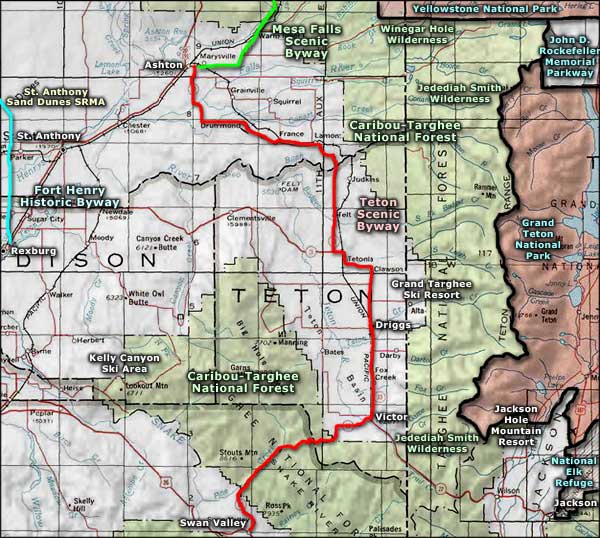