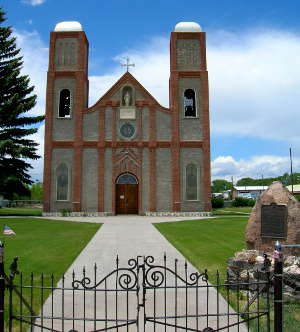 The Sangre de Cristo National Heritage Area encompasses Alamosa, Conejos and Costilla Counties in the southern part of the San Luis Valley. San Luis, in Costilla County, is Colorado's oldest still-inhabited town. The Catholic Church in Conejos (just outside Antonito) is Colorado's first church. The first Europeans to arrive came from the south, from the Spanish colonies of Chihuahua and Nuevo Mexico. They explored, prospected, hunted, fished and chased after Native Americans who'd stolen their horses and women. Then beginning in the early 1800's, the King of Spain (and then the Government of Mexico) started giving land grants to individuals and groups in order to speed up settlement of the area.

Before the Europeans arrived, the Ute Tribe had laid claim to the area, mostly since about 1300 CE. There is no evidence in the valley indicating that there were permanent settlements until the Europeans arrived as the Native Americans had always treated the valley as a seasonal hunting ground. The valley in summer has been a Native American crossroads for thousands of years. After the snow melted out of the high passes, the Utes would come from the west, the Navajo, Apache and Puebloans from the south and the Arapaho, Cheyenne, Comanche and Kiowa from the east.

The bounds of Costilla County are also the bounds of the Sangre de Cristo Land Grant. About half of Conejos County was part of the Guadalupe Land Grant. There were other, smaller land grants in the area, mostly upstream in the valley of the Rio Grande. When the entire area was ceded to the United States in the aftermath of the Mexican War (1846-1848), Congress committed to honoring those land grants as long as the people who owned the land grant had the necessary paperwork. Those were fateful words as Congress required that paperwork be presented to Congress (in Washington, DC) in 1860... and several of the land grant owners didn't do it. The Guadalupe Land Grant produced their paperwork in 1861 but Congress said "Too late" and the lands of the grant automatically became lands of the United States and therefore open to homesteaders. Families that had lived there for years either bought their properties from the Government Land Office or were evicted. The Sangre de Cristo Land Grant was able to hold its own for a number of years but eventually succumbed to the pressure of taxes: the northern half of the property was sold to Eastern investors to pay Federal and State back taxes. Over the years, that happened to most of the southern part of the grant, too. 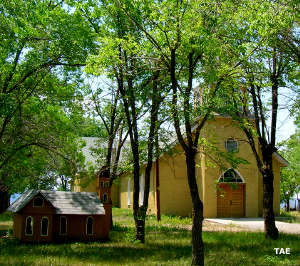 Alamosa was founded in 1878 as a railroad town, a service center for the Denver & Rio Grande Western Railroad. By that time, there was a large colony of Mormons in the area and they had discovered how to turn the mostly barren and arid landscape into fertile agricultural fields.

There have been bust and boom times since. The railroad ran tracks all through the valley and towns sprang up along each siding. Gold was discovered high on Mount Blanca and ore processing mills were built in Blanca, right beside the tracks. But, as usual, the gold soon ran out although national boom and bust cycles often brought people back to the gold mines to try yet one more time. With irrigation, the central San Luis Valley became a hotbed for the growing of potatoes, broccoli, barley and hops (most of which is sold to the Coors Brewing Company). Cattle, sheep and hay are also big money makers in the valley.

Most of the railroad tracks disappeared in the 1950''s but there are still sections connecting Alamosa with La Veta (over the mountains to the east), Alamosa with Creede (to the northwest) and Alamosa with Antonito (to the south) and the junction there with what is now the Cumbres & Toltec Scenic Railroad (which runs a round trip daily between Chama, New Mexico and Antonito in the summer time). The track from Antonito to Alamosa to La Veta is now part of the Rio Grande Scenic Railroad (which also runs round trips daily in the summer time).

There are miscellaneous other historical sites around the area, too, like Pike's Stockade (where the Zebulon Pike Expedition settled in for the winter of 1806-7), the San Luis Hills Area of Critical Environmental Concern, the "Stations of the Cross" Shrine near San Luis and the Jack Dempsey House and Museum in Manassa.

At the Cumbres & Toltec Railroad station in Antonito