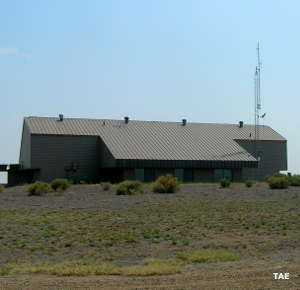 Long a sanctuary for wildlife and man, the San Luis Valley was once home to the Ute tribe. These "Blue Sky People" shared their elk, deer, pronghorns, small game, and waterfowl with occasional Comanche raiding parties. The first Europeans in the Valley came with Don Diego de Vargas in 1694. For the next 100 years the Spaniards led occasional forays north to try and stop the marauding Comanche but that wasn't accomplished until the 1780's when Juan Bautista de Anza finally concluded a treaty with the Comanches several years after he and his men killed Cuerno Verde, a charismatic war chief, at the foot of Greenhorn Mountain.

Zebulon Pike was the first American to come into the Valley and he was promptly arrested and taken to Santa Fe for questioning. After Pike came the trappers and fur traders. In 1848, with the conclusion of the Mexican-American War, the Valley became American territory and was opened up for settlement. When large numbers of Europeans arrived and settled in the Valley, the wildlife quickly began to decline. The Monte Vista National Wildlife Refuge was created in 1953 as a safe haven for the remaining wildlife in the Valley, especially the waterfowl. Alamosa National Wildlife Refuge was established in 1962 for the same reasons. 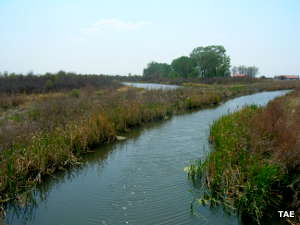 The Valley extends over 100 miles from north to south and 50 miles from east to west, with high mountains in three directions. These high mountains feed the Valley with precious surface water, as well as replenish an expansive underground aquifer. All organic life lives in the balance of this natural cycle. Rivers fed by mountain snow and wetlands created by artesian pressure create threads and patches of life on the valley floor. Early European settlers took advantage of this liquid wealth and for the past 200 years turned the San Luis Valley into a rich agricultural center.

Alamosa NWR has a wilder character than Monte Vista NWR. To preserve this wildness, the refuge is less intensively managed. However, water is still manipulated and other management tools such as burning and grazing are used. Water from the Rio Grande is supplemented by artesian wells and water pumped from the Closed Basin Project.

Alamosa Refuge is located 4 miles east of Alamosa on US 160 and then south 2 miles on El Rancho Lane. The property has a visitor center (operated by volunteers - not always open) and offers a 2-mile round trip hiking trail through the wetlands. The Bluff Overlook is on the eastern side of the refuge and offers a 3.5-mile auto tour route. 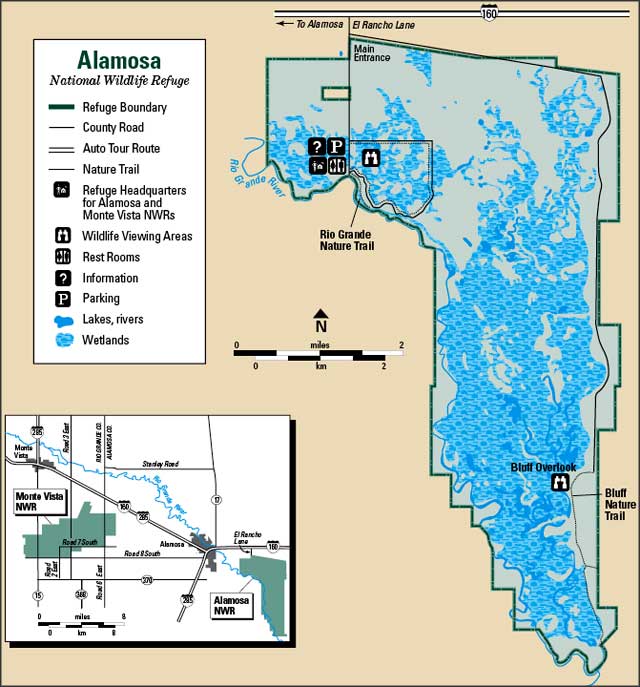