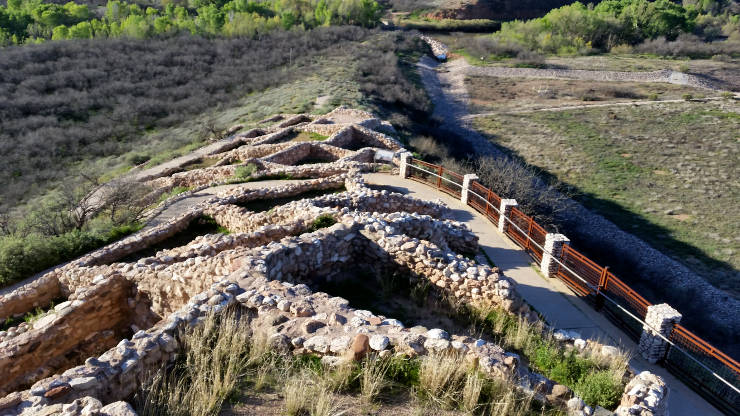 The view south from the summit of Tuzigoot National Monument 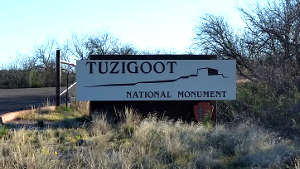 Built by the Sinagua people beginning around 1000 CE, Tuzigoot grew to a total of about 110 rooms, many of those rooms being on the upper stories of the stacked-masonry structure. The Sinagua were experts at living in a dry area, growing plentiful crops and running a trading empire across thousands of square miles of what is now northern Arizona and southern Utah. It was around 1000 CE that Sunset Crater Volcano was spewing forth its lava and ash to the north. Many of the folks from that area probably came here to survive those natural fireworks. Life here must have been good to them because the pueblo was in use up until about 1400 CE, well into the time of the drought up north that forced many of the people out of the area and into the pueblos of the Rio Grande and what is now the Hopi Reservation.

This area is just south of the Mogollon Rim, warm in winter and hot in summer. At the northern edge of the Sonoran Desert, there are several perennial streams that flow south out of the Mogollon uplands to the Verde River, creating strips of riparian habitat in what would otherwise be a typical juniper-and-creosote bush landscape in central Arizona. So between the rolling hills and open areas of juniper, palo verde, ocotillo and ironwood are corridors of cottonwoods and sycamores shading willows, cattails and bulrushes.

One of the crops the Sinagua grew in this area was a type of cotton that is native to South America. Some beautiful samples of the cotton cloth they were weaving and wearing long before the Spanish arrived have been found in the rubbish mounds that used to cover parts of the now-excavated pueblo. Some of the woven baskets found indicate the Sinagua were master basket makers, too. In the Visitor Center you'll find exhibits containing many of the thousands of artifacts found at Tuzigoot when the main excavation and site stabilization occurred back in the 1920's and 1930's.

The first Europeans arrived in the Verde Valley in the late 1500's. The site at Tuzigoot had already been abandoned but was still an impressive sight. In those days, this part of the Verde Valley was an area of slow moving water, spread out across sloughs and marshes along the floor of the valley. In places, the water flow was a mile or more wide. This was an almost tropical marshland filled with lush vegetation that provided a lot of different habitat for many species of birds and mammals. In those days, even parrots lived and thrived here. Since then, the area has become much drier, although a sample of that old landscape still exists in the form of the Tavasci Marsh, adjacent to the pueblo ruins at Tuzigoot. Tavasci Marsh is named for a pioneer family that moved in and began a dairy operation back in the days of the big copper mines. To provide more grazing land without impacting on the mine site, some of the marshland was drained. These days, Tavasci Marsh is managed as a wetland, a wetland designated as an "Important Bird Area" by the Audubon Society. As less than 5% of the original wetlands found in Arizona still survive the onslaught of that imported European presence, this is an important area to preserve. But as you explore the ruins at Tuzigoot National Monument, realize it was these wetlands and the water that flows through them that made it possible for the Sinagua people to flourish here. The barren and desert-like countryside you see around you these days wasn't always this way...

Tuzigoot National Monument Visitor Center is open from Labor Day through Memorial Day from 8 am to 5 pm, and from Memorial Day through Labor day from 8 am to 6 pm. The only day the park is closed is Christmas Day. The entrance fee is $5 for ages 16 and up (ticket is good for 7 days from day of purchase) - 15 and under get in free. You can also get a discounted pass here good for both Tuzigoot and Montezuma Castle National Monument for $8. There is no entrance fee for the Montezuma Well unit.

Tuzigoot National Monument was authorized by Congress as an 834-acre unit but only 58 acres is presently owned by the National Park Service. There is a self-guided, 1/3-mile loop trail through the ruins with another 1/2 mile round trip trail that visits the overlook above Tavasci Marsh. Camping and campfires are not allowed on the property.

Tuzigoot National Monument is located off State Road 89A between Cottonwood and Clarkdale.

Looking north from the summit of Tuzigoot National Monument 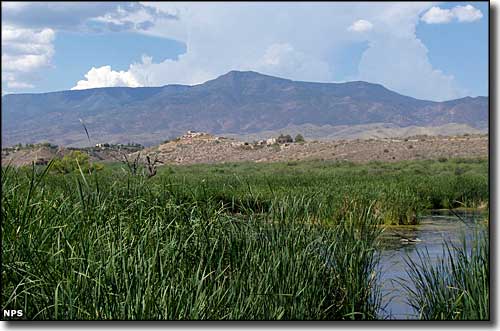 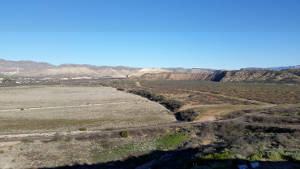 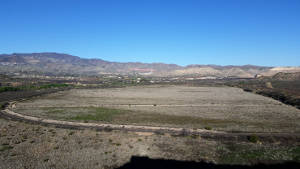 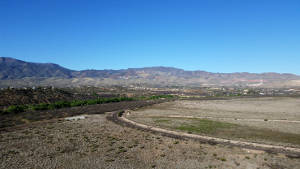 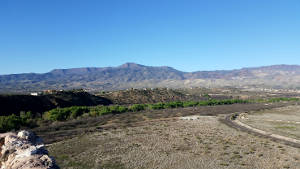 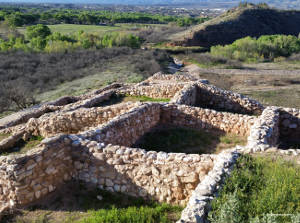 Rooms in the old pueblo
at Tuzigoot National Monument