The Sinagua people lived in this area northeast of the Kachina Peaks stratovolcano for centuries before the volcanic mouth at Sunset Crater began shooting cinders and ash into the sky, before the lava flowed out and changed many parts of the land. Their Hopi, Zuni and Navajo descendants still tell stories from that time as they watched the mountain create itself. That was sometime between 1040 and 1100 CE. It wasn't a bad thing as the ash and minerals that fell out of the sky fertilized the soil. And apparently very few people died when the cinders and volcanic bombs fell back to Earth.

Modern explorers (archaeologists) have been excavating in the area and have found many pithouses from those days, but none with human bodies in them. Perhaps the Sinagua were smart enough to listen to what was happening in the Earth beneath them... or perhaps any who were caught in the heart of the volcanic firestorm were totally consumed. But the eruptions went on for a number of years.

By 1100 CE, most residents in the area were settling back in, to places like Wupatki and Walnut Canyon, a bit further away from the volcanic vent. The lava covering the land was probably thinner and cooler in those places. We do know that the ash and cinders did help keep water in the soil when it rained and that made farming easier. 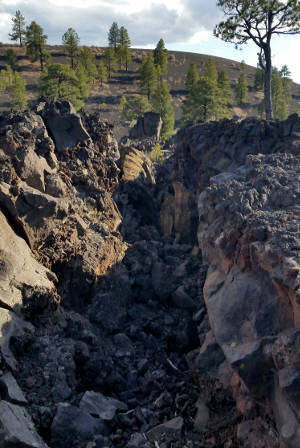 The Sinagua stayed in the area maybe a couple hundred years after the eruptions subsided, farming, hunting and building a few large pueblos. Then the climate changed and everything went dry. The springs and streams dried up, the rains dropped off, and the crops withered on the stalk. That's when the people moved further away and began the transition into the people we now know as Hopi, Zuni and Rio Grande Puebloan. These are the people who still tell stories of watching the volcano erupt.

In the 1920's a Hollywood movie company showed up here and wanted to blow up Sunset Crater for some kind of movie stunt. They filed an application with the government but the public heard about it and started screaming. That led to President Herbert Hoover signing an Executive Order that designated the Sunset Crater Volcano National Monument.

In terms of the San Francisco Volcanic Field, a dormant but still-active field in northern Arizona, Sunset Crater is just a baby. Some of the other 600 cinder cones in the area are several million years old. At the peak of Sunset Crater's eruption, materials were spewing from the central cinder cone and from two vents at its base. There were also 9 smaller cinder cones, several spatter cones and several fumaroles ejecting ash and cinders, while some were simultaneously flowing liquid lava across the surface of the Earth. The fissure in the Earth that allowed all this activity was about 6 miles long. We can see similar volcanic activities these days by going to the big island of Hawaii.

Sunset Crater Volcano National Monument is open all year from sunrise to sunset. The Visitor Center is open every day except Christmas. Hours are: November to April: 9 am to 5 pm; May to October: 8 am to 5 pm.

To get there: take US Highway 89 north out of Flagstaff and watch for the signs.

The lava flows around Sunset Crater

Fertile volcanic soil, 1,000 years after it spewed across the land...

Part of the San Francisco Volcanic Field from space