The view toward Monument Valley from just outside Kayenta 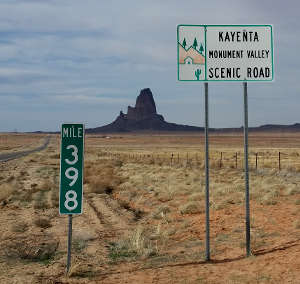 The Kayenta-Monument Valley Scenic Road is a 27-mile route along US Highway 163 from Kayenta to the Utah state line. Monument Valley is known as Tse' Bii' Ngzisgaii (Valley of the Rocks) among the Navajo. This is one of the most famous locations in the American Southwest, used in many television commercials and countless movies of the Western genre.

For most of the last 12,000 years, this area was populated sparsely by various nomadic tribes. Then advances in agriculture, technology and weaponry allowed the Ancient Puebloans to set up the first stationary community in the area. Around 1250 CE the climate changed for the drier and the Ancient Puebloans moved out, leaving ruins behind all over this landscape. The Navajos arrived in the area sometime around 1500, finding the Hopi already in place on their mesas in the heart of what is now the Navajo Reservation (although the Hopi area is now the Hopi Reservation).

It was in the 1500's that the Spanish first came into the area, bringing horses and sheep. Within a few years, horses and sheep were a mainstay in Navajo culture. The Navajos acquired them by stealing them from Spanish settlers. That brought out the Spanish military and the early history of Spain's presence in this area is a long story of thievery and killing on both sides. That didn't change after the Mexican-American War in 1846-1848. The American government may have taken possession of the countryside but there was no significant American presence in the area for years. It was Navajo raids on nearby settlers that brought Kit Carson and the US Army to the area in 1863. Carson was charged with collecting the Navajos and marching them to exile at Bosque Redondo in eastern New Mexico. Using scorched-earth techniques, Carson eventually chased down the majority of the tribe and forced them to take "the Long March" to Bosque Redondo. Many Navajos didn't survive the march and many died in exile. A few years later, Congress relented and allowed the Navajos to return to their homeland as long as they agreed to keep the peace. From that time on, the Navajo Nation has (for the most part) been treated as a sovereign entity.

There were problems again starting in the 1880's as Anglo-Americans flooded into the area looking for silver and gold. They had no respect for the natives or for any treaties with the natives. Almost none of them survived their invasion of Navajo territory. In 1906, John and Louisa Wetherill established a trading post in Navajo territory and lived to tell about it. There was some serious resistance at first but the tribe eventually determined the Wetherill's to be honest people and tolerated their presence. In 1910, the Wetherill's moved their trading post to Kayenta to be near a larger population of Navajos. In 1923, Harry Goulding and his wife arrived, also setting up a trading post in the area. However, Goulding just got his business really started when the Great Depression hit and took the money out of everything. Desperate for cash, Goulding made a trip to Hollywood with a folder full of photos and met with movie director John Ford. He returned home a few weeks later with a check for $5,000 and a Hollywood movie crew in tow. Between 1929 and the 1960's, more than 40 movies were filmed in the area. At one point John Ford said, "I've killed more Indians than Custer, Beecher and Chivington put together."

Today, there are visitor centers at Kayenta and at the Navajo Tribal Park in Monument Valley. Everyone can look and see but if you want to get up close and personal, you'll need to hire a Navajo guide. As the guides know the land and its stories better than we know the backs of our hands, the money spent is well worth it.

A view of the famous Mittens 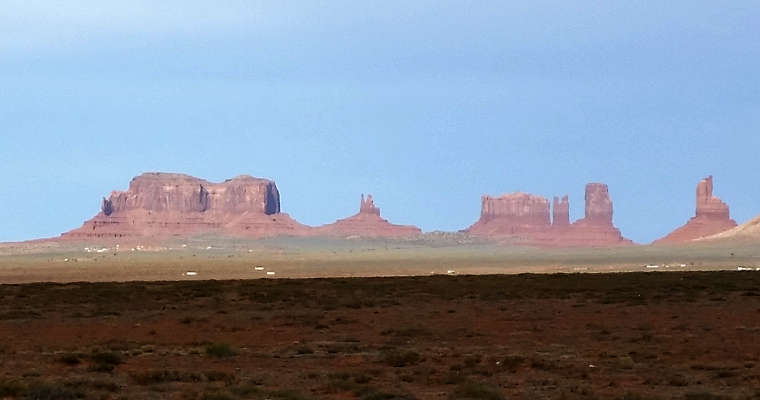