The north ridge of Wheeler Peak

The Wheeler Peak Wilderness includes 19,661 acres of high, rugged terrain spread out along the top ridge of the Sangre De Cristo Mountains in northern New Mexico. Elevations range from a low of 7,650' to a high of 13,161' at the summit of Wheeler Peak (highest point in the state). Most folks enter the Wheeler Peak Wilderness from a trailhead at the Twining Campground (above Taos Ski Valley). That trail heads up onto the spine of the Sangre de Cristo's and connects with an extensive, heavily used trail system. The Wheeler Peak Trail follows that high ridge south for about 8 miles to the summit.

Wildlife in the Wheeler Peak Wilderness

Marmots, pikas, elk, mule deer, and golden eagles all share this habitat. Marmots, also known as whistling pigs, are the fat furry creatures you see crawling around on the talus slopes. They look very much like small groundhogs. Their whistling call is a warning to other Marmots (they tend to live in communities in the crevices of talus slopes and boulderfields). Marmots are true hibernators, sleeping 8 months of the year. In that short 4-month summer they are very active, feeding on any grasses and forbs which stick up through the rocks in their neighborhood.

If you sit very quietly, you may see a pika. Pikas are like small, very skittish rabbits without tails. They spend the summer eating and gathering "hay." They clip vegetation, let it dry, and then store it under rocks to eat during the long winter. Unlike marmots, pikas don't hibernate.

Golden Eagles can sometimes be seen circling high above. They are ever so graceful as they circle in search of their favorite lunch: any kind of rodent. There are also some mule deer and Rocky Mountain elk that make Wheeler Peak Wilderness their summer home. The higher elevation is cooler and often lush with grass and new aspen growth, their favorite foods.

Originally native to the Wheeler Peak area, Bighorn Sheep were re-introduced in 1993 and are now thriving in the alpine meadow habitat all year round. Depending on the coldness and depth of snow, winter can particularly hard for the sheep because they depend on windblown slopes to find forage. Enjoy watching them but please, do not approach or try to feed them.

Every few years, the New Mexico Department of Game and Fish has a helicopter fly over and stock Horseshoe and Lost Lakes with native cutthroat fry. They also stock Middle Fork Lake and the Rio Hondo (below the Ski Valley) with rainbow trout in early July. Above Taos Ski Valley, the Rio Hondo has a self-replenishing population of native cutthroat trout, as does Sawmill Creek. NM Game and Fish also stocks the East Fork of the Red River with rainbow trout.

A license and a trout stamp are required for fishing. For more information, contact the New Mexico Department of Game and Fish in Raton at (575) 445-2311.

There are no fish in Williams Lake because it is too shallow to provide sufficient fish habitat in the winter: what water is there usually freezes all the way to the bottom...

From the cottonwoods along the Rio Hondo to the Bristlecone Pines guarding the peaks, Wheeler Peak Wilderness has almost every species of tree native to northern New Mexico. Englemann Spruce and sub-alpine firs are the predominant conifers. Because Wheeler Peak is so high, it is one of the only places in New Mexico where you can see a true alpine "mat" as opposed to grasses that grow in most other high alpine locales. The "mat" produces beautiful, brilliantly colored flowers.

Those burnt orange patches all through the talus are various species of lichens. The Forest Service uses lichens as an indicator of acid rain and general air quality. If the lichens begin drying out and get crumbly, the Forest Rangers start testing for acid rain.

Songbirds are almost everywhere. Magpies, Canada jays, chickadees, woodpeckers, and so many other birds can be seen and heard throughout the Wilderness.

The heaviest people-traffic in Wheeler Peak Wilderness happens between July 4 and Labor Day. In late June or early September, there are fewer people and the weather is usually very nicely crisp and clear.

July and August are usually the rainiest months with almost daily afternoon showers. Be prepared. Carry rain gear and a good tent if you are intent on staying overnight. Daytime temperatures in the summer are often in the 60's but can drop dramatically when a storm comes in. Nights are cold, sometimes below freezing. Snowfall usually begins in early October. The wilderness is open to cross-country skiing and snowshoeing. Be careful though, avalanche danger can be significant.

Beware of lightning on the high ridges. Since the top of your head will probably be the highest and best target around, get off the ridge if thunderclouds come overhead. If you are trying to round-trip Wheeler Peak summit in one day, leave early in the morning in order to avoid the early afternoon thundershowers.

Take proper clothing. Temperatures can drop precipitously. Wet clothing can chill the body very quickly. Even when wet, wool is best for retaining heat; cotton next to the skin will keep you damp and will wick your body heat away. Dress in layers that you can easily add or remove as the temperature changes. And make sure someone who's not with you knows that you are out there... 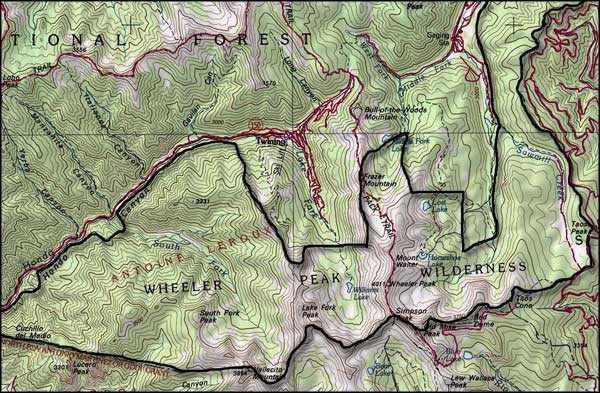