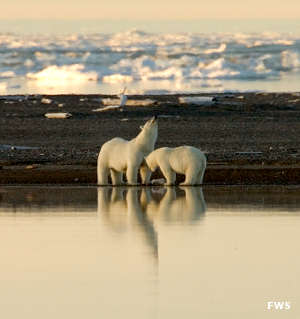 Most folks who visit the Arctic National Wildlife Refuge go there by air with a small plane piloted by a local bush pilot. There are no roads once you get there, but there is a historic trail that connects the Gwich'in settlement of Arctic Village (on the southern edge of the Refuge) with the Inupiat village of Kaktovik (on the Arctic Ocean). You can also reach the property by boat (on the rivers or along the Arctic Coast) and by walking (the Dalton Highway passes close to the western edge of the property).

8 million acres of the Arctic National Wildlife Refuge are designated as the Mollie Beattie Wilderness Area. The 11000 expansion of the property also caused the designation of the "1002" area: 1.5 million acres being explored for the possibility of petroleum extraction. The remaining 10.1 million acres of the refuge are in a category that requires "minimum management" (which means maintain existing resource values and natural conditions). This remainder could also become designated wilderness area but there are no plans yet before Congress to do that.

Red hills, just south of the Arctic Ocean on the Mollie Beattie Wilderness 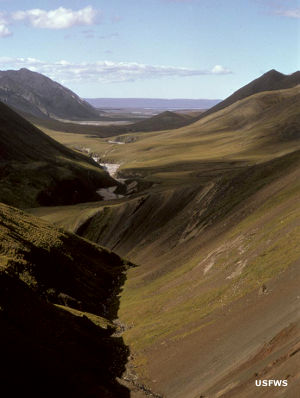 At 8 million acres, the Mollie Beattie Wilderness is second only to the Wrangell-St. Elias Wilderness in size. Mollie Beattie contains more than 40% of the land of the Arctic National Wildlife Refuge. The property is centered around the eastern Brooks Range, an area of arctic, subarctic and alpine ecosystems. The highest mountains in the Brooks Range (around 9,000') are here.

North of the mountains is a rolling tundra plain, dotted with multitudes of freshwater lakes and cut by thousands of meandering streams. To the south are wide, hardwood and conifer-covered valleys. Most of the Brooks Range itself is treeless.

The wildlife is abundant, even by Arctic standards. You'll find moose, brown bear, gray wolf, wolverine, and red fox everywhere. To the north are where the Arctic fox, reindeer and muskox hang out. In the forests are black bear, lynx, porcupine, beaver, river otter and coyote. On the northern ice are walrus, seals and polar bears. In the high mountains are Dall sheep and marmots. The 110,000 caribou of the Porcupine herd also hang out in the southern portions of the wilderness in winter. The flowing waters run thick with rainbow trout, Dolly Varden trout, Arctic grayling and salmon (in season). If you come in the summer to check out the millions of migratory birds who fly in to nest and rear their young, remember to bring your industrial strength bug repellent: it's all those bugs in the air that the birds came to feed on.

The well-known conservationist Mollie Beattie was also the first woman director of the US Fish & Wildlife Service.

A winter scene in the Mollie Beattie Wilderness 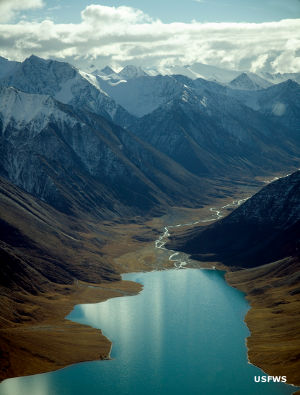 There are five different ecological regions on the Arctic National Wildlife Refuge: aspen of the boreal forest, the forest-tundra transition zone south of the mountains, the Alpine tundra zone of the Brooks Range, the coastal plain tundra and the salt marshes, beaches and lagoons of the coastal marine areas. 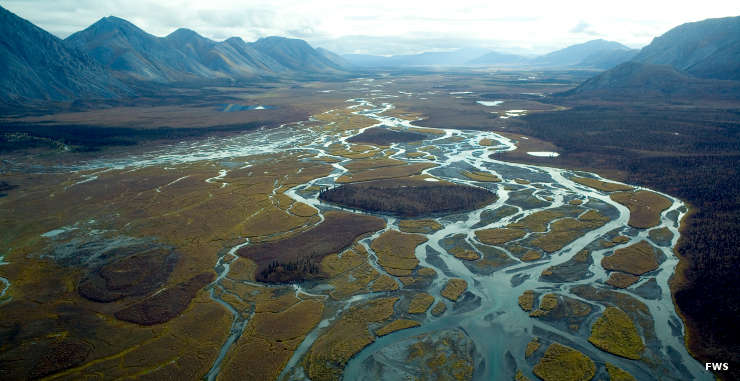 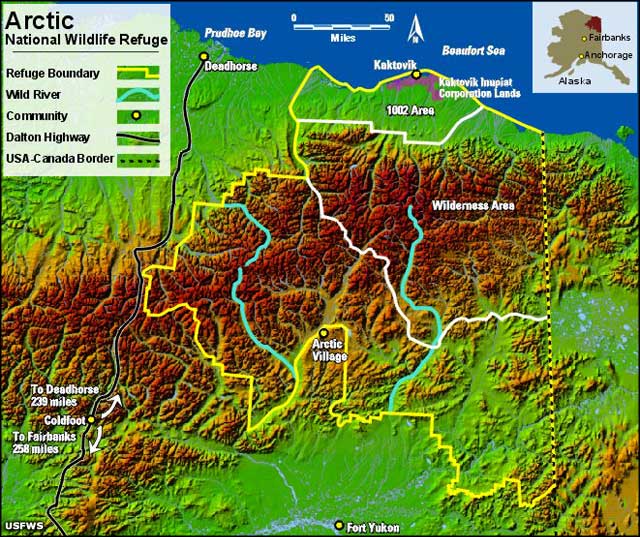