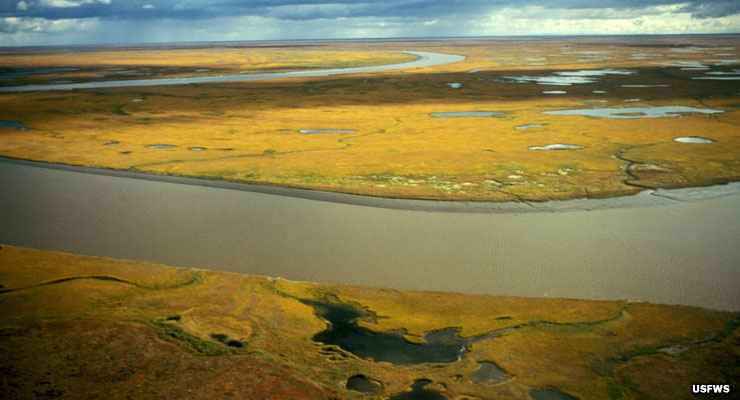 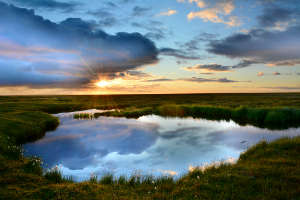 At 19.16 million acres, the Yukon Delta National Wildlife Refuge is the second largest national wildlife refuge on Earth. The major part of the property is composed of extensive wetlands covering the delta of the Yukon and Kuskokwim Rivers. This is a coastal plain running inland from the Bering Sea, and most of the plain is often inundated by the Bering Sea tides (70% of the property is less than 100' above sea level). There are about 25,000 people living in maybe 35 villages scattered across the refuge.

This is a land of subarctic tundra sitting on permafrost. That means peatland, scrub marsh, heath meadow and bog habitats. Less than 5% of the property is forested. In the higher mountain areas to the north, east and south you'll find Alpine tundra. None of the mountains in the area are above 4,000' in elevation. Along the rivers themselves you'll find narrow bands of mixed black spruce-balsam poplar, black spruce-hardwood and balsam poplar woodlands extending for some distance out into the delta. There are also pockets of white spruce and black spruce interspersed throughout the Andreasky and Kilbuck Mountains. None of this timber is commercially harvestable. The Askinuk Mountains along the refuge's western coast are the only part of the coastal plain that has been covered by glaciers.

Millions and millions of shorebirds and waterfowl make their nests here every summer, making this property the most important and productive wetland habitat for shorebirds and other waterfowl in the United States. About 80% of the North American breeding population of black brant and nearly all emperor geese are hosted here. Counting golden eagles, bald eagles and peregrine falcons, 19 species of raptors can be found here. 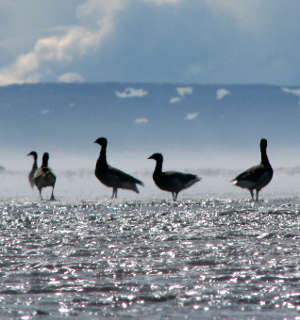 Historically, this area was home to huge numbers of caribou, until the days of the big gold rushes. Small herds of caribou did survive in the depths of the Andreafsky and Kilbuck Mountains. Recent years have seen up to 40,000 caribou migrate from the Mulchatna Herd to the eastern parts of the refuge in the fall and winter.

About 1.3 million acres of Yukon Delta National Wildlife Refuge is contained in the Andreafsky Wilderness. The wilderness is in the Andreafsky Wild & Scenic River drainage, an area of white spruce and balsam poplar forest. In the upper areas that forest gives way to a relatively flat and treeless plain.

About 600,000 acres of Yukon Delta National Wildlife Refuge is contained in the Nunivak Wilderness, a property that essentially covers the southern half of Nunivak Island. Nunivak Island is probably best known for its herd of shaggy musk oxen. The Alaskan musk ox went extinct around 1865 and the musk oxen on Nunivak Island were transplanted there from Greenland in 1935. The herd flourished and grew to more than 750 members strong. Some have been shipped to other areas in Alaska while every year there is a draw to determine which hunters may get the chance of a lifetime and help to keep the herd on Nunivak Island healthy. 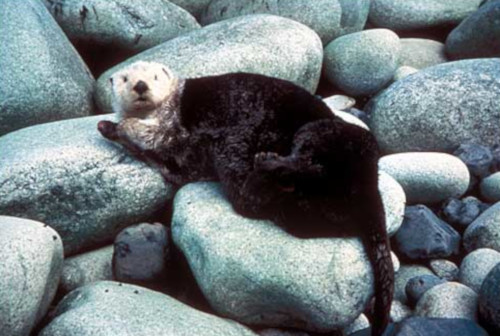 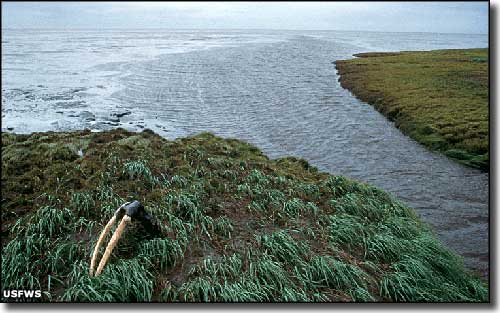 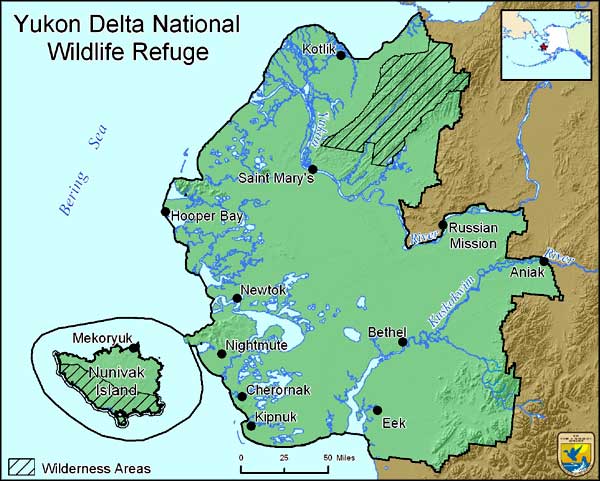