Natural Bridges National Monument protects some of the finest examples of ancient natural stone architecture in the southwest. The monument is located in southeast Utah on a pinon-juniper covered mesa bisected by deep canyons of Permian age Cedar Mesa Sandstone. Where meandering streams cut through the canyon walls, three natural bridges formed: Kachina, Owachomo and Sipapu.

At an elevation of 6,500 feet above sea level, the Monument is home to a wide variety of plants and animals.

These formations are not as delicate as the ones at Arches National Park. They are also water-carved in Cedar Mesa Sandstone rather than wind-carved in Entrada Sandstone. Cedar Mesa Sandstone is eroded down into rather than the surface being blown away and arches/bridges of slightly harder stone left standing. Another significant result of the water-carving is that the canyon meanders and Kachina Bridge is now cut off from the water erosion as the stream has cut its way around another bend through slightly softer rock.

One of the best-preserved Ancestral Puebloan sites in the area, Horsecollar Ruins is a major attraction at Natural Bridges. Named because the doorways to two structures resemble horsecollars, the site was abandoned more than 700 years ago. Its remarkable state of preservation, including an undisturbed kiva with the original roof and interior, is likely due to the isolation of Natural Bridges: few visitors in the last 700 years have made the journey down these canyons.

Kachina Bridge
Click on any of the images below to see a larger version: 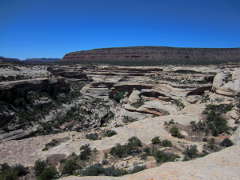 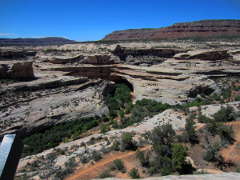 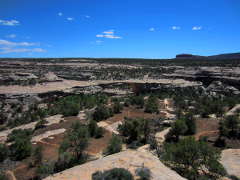 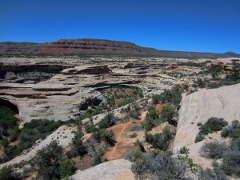 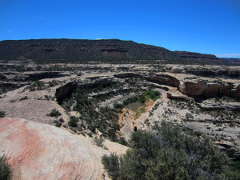 Another view of the canyon 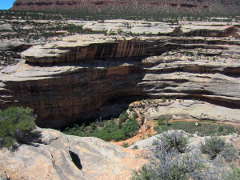 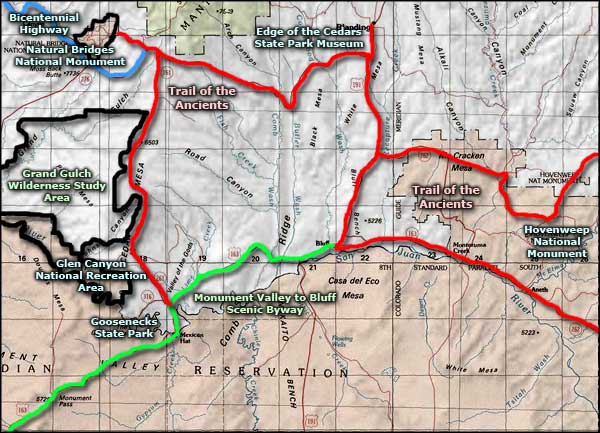