At the entry to the Bull Creek Pass Backcountry Byway 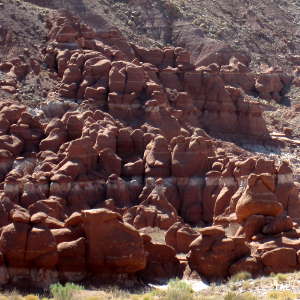 The Bull Creek Pass National Backcountry Byway is a 68-mile drive through some of Utah's most spectacular and yet almost unknown/unseen scenery. The road is drivable but is not an easy drive: figure on taking 6 to 8 hours to drive the whole route because it is twisty, rugged, steep in spots, single lane and thoroughly unpaved. There are sections where you'll wish you were driving 4WD with high clearance. The road is impassable in the winter and when wet. But the views of the alpine mountains, the wildly colored canyons, the sheer cliffs and the vast badlands... Figure on gaining and losing more than a mile of elevation between the beginning and the end of the road in this zone between Capitol Reef and Canyonlands National Parks. Bull Creek Pass itself is at 10,485 feet in the Henry Mountains, the last range of mountains in the lower 48 states to be named and explored.

Bull Creek Pass National Backcountry Byway passes close to three of the five highest peaks in the Henry's. At the summit of Bull Creek Pass you'll find the trailhead for a 5-mile round trip hike to the summit of Mt. Ellen (11,506') with one of the most spectacular viewpoints in central Utah: Canyonlands National Park, the Abajo Mountains and Dirty Devil River to the east, Boulder Mountain, Circle Cliffs and Waterpocket Fold to the west.

Near the beginning of the byway you'll pass by the remains of Eagle City on Crescent Creek. Gold was discovered in Bromide Basin (about 2 miles up the canyon from what became Eagle City) in 1889. The Oro and Bromide mines were developed and processing mills were soon built at the canyon junction. Eagle City grew next to the mills as soon as word got out and shortly, there were two saloons, a dance hall, a hotel, a doctor's office, a post office and three stores in operation. Up to maybe 100 people eventually lived here but when the mine shafts reached a 300-foot depth, they began filling with water. A drain tunnel was planned but never built because of the lack of funding. In 1911 the Bromide Mill burned to the ground and shortly, the town was almost completely deserted: one resident stayed after the beginning of World War I and he was busy searching the hills for the Lost Josephine Mine until he died sometime in the 1970's. Eagle City had a reputation as a rough town and among the saloon patrons were members of Butch Cassidy's Wild Bunch. Some of the buildings are still standing but I would imagine all the artifacts have been heavily picked over by now.

Between Eagle City and Highway 95 (the Bicentennial Highway) you'll find the Little Egypt Geologic Site: an area where the eroded hoodoos in the Entrada Formation sandstone resemble the ancient temples of Egypt. The rock is the same formation found at Goblin Valley State Park, in Cathedral Valley at Capitol Reef National Park and at Arches National Park. The entrance to the site is about two miles off Highway 95 and is not signed: just look for the hoodoos under a cliff just west of the road.

I drove into the byway area in May, 2017, late on a Saturday afternoon. The road was in pretty good shape considering it was early in the season and the winter had been wet. Past the Little Egypt area the surface turned to straight sand for a couple miles, then turned and headed northwest at a road junction, the surface turned to gravel again and I came to Crescent Creek shortly after. Water was flowing in the creekbed but I didn't have to cross any water for a couple more miles. I saw nothing of Eagle City but about 5 miles beyond that water crossing I came to the Pandora Mine, site of an on-going placer operation. A couple miles up the hill past that I came to the back end of a road grader making its way slowly up the hill and decided to turn around. The view off to the east was expansive, too large to fit in my camera.

Going back down I came to a grass landing strip just below the Pandora Mine, completely missed on my way up. As I went out I got a shot of a stone sheepherder's cabin from the early 1900's, then a shot of a log cabin on the side of Crescent Creek. Down near Little Egypt again I got out to look back and got the shot of the painted hills (looked like Chinle Formation but I'm not sure). Then I got back on the highway and headed for Hanksville, about 10 miles to the north.

Next to Crescent Creek
Click on any image below to see a larger version: 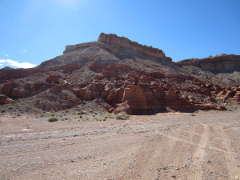 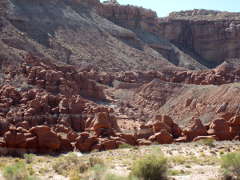 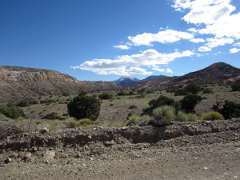 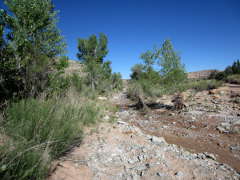 Water on the road 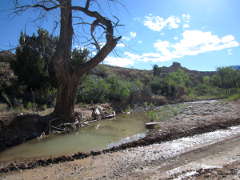 Upstream of the road 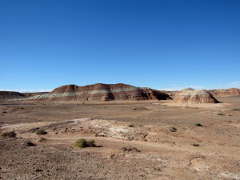 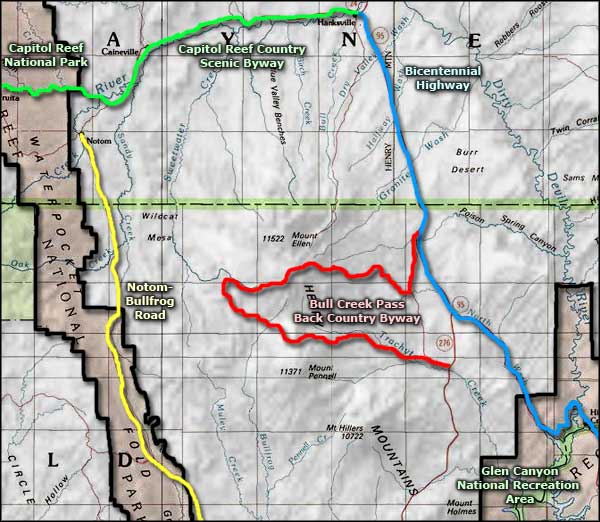