A great egret among the cypress

Most American National Parks were created to safeguard some natural feature or features. Everglades National Park was created to protect a fragile ecosystem. In the park you'll find 36 species that are listed on the Federal Threatened or Endangered Species List, including the American crocodile, American alligator, Florida panther and the West Indian manatee. You'll also find more than 50 species of reptiles, 40 species of mammals, 300 species of fresh and saltwater fish and 350 species of birds.

In 1978, Congress designated 1,296,500 acres of the Everglades as the Marjory Stoneman Douglas Wilderness, locking up this fragile landscape forever for the protection of the wildlife and vegetation that live there.

The Everglades is actually a very slow moving system of rivers fed by Lake Okeechobee and the Kissimmee River. The waters tend to move southwest at about 1/4 mile per day. Humans have lived in this area for thousands of years but it was only in the 1880's that a serious impact was felt from human uses of the land. It was in 1882 that industrial-strength drainage of the region for residential and agricultural use began. Since then, the ecosystems of the park have suffered significantly, and repair and restoration of the environment is a very politically charged issue.

A dry trail in coastal prairie

December to April is the dry season in the Everglades. Humidity is low and temperatures usually vary from 53°F to 77°F. Water levels drop off and most of the animals gather around central water holes. That makes winter a good time to visit and check out the wildlife. The wet season runs from May to November and brings humidity levels above 90% and temperatures consistently above 90°F. Rainstorms are frequent and drenching downpours can drop 10 to 12 inches of rain at a time.

As a large part of the Everglades is overflowed by a river between 40 and 70 miles wide, tropical hardwood hammocks are often the only dry land around. The hammocks rise only a few inches above the flowing water and are often covered in southern live oaks. The taller oaks form a canopy under which thrives populations of white indigoberry, wild coffee, poisonwood and saw palmetto. In places, the live oaks give way to gumbo limbo and wild tamarind but hardly anything grows taller than maybe 50 feet. The hammock base is usually so overgrown that it is nearly impenetrable, but that provides an excellent habitat for reptiles and amphibians. Southern bald eagles, northern cardinals and barred owls often make their homes in the trees of the hammocks. You'll also often find white-tailed deer, bobcat, Everglades mink, raccoon and opossum living in the hammocks. These mammals sometimes attract the critically endangered Florida panther in its search for lunch. 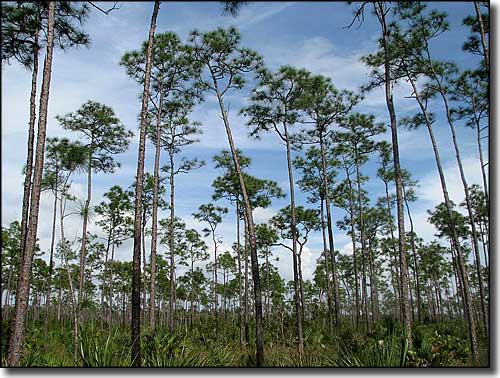 In some areas you'll find "pine rockland." These are areas where the underlying limestone has been worn away and the area filled in with real soil. The pines that grow in this soil tend to be South Florida Slash Pine, a species that needs fire to open the pine cones and allow the seeds to get out. So prescribed burns are a regular feature of management practices in the National Park. Most plants in the pine rocklands bloom about four months after a fire has passed through. This habitat supports Florida black bear and Florida panthers, in addition to being favored by loggerhead shrikes, northern mockingbirds, grackles, eastern meadowlarks and woodpeckers. Miami-Dade County used to be covered in pine rocklands but the trees were logged off long ago and now, only about 4,000 acres of this threatened habitat still exist, all of it within the boundaries of Everglades National Park.

Closer to the ocean waters you'll find the largest continuous mangrove system on Earth. Mangroves are uniquely suited to exposure to salt water, extreme tides, high temperatures, muddy soils and high winds. The mangrove swamps support 18 species of mammals, 24 species of reptiles and amphibians, more than 200 species of fish and shellfish and hundreds of species of birds. 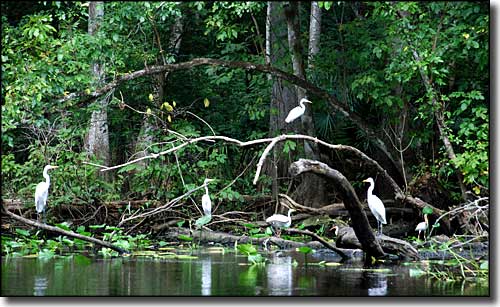 A typical scene in the Everglades

In the mangrove areas you'll also find cypress domes and strands: areas where the cypress grow together thickly and in long strands along the ridges of submerged limestone. Cypress seem to thrive in standing pools of fresh water, and they support large populations of Spanish moss, bromeliads, orchids and ferns that grow in their branches and along their trunks. You'll usually find herons, ibis, egrets, anhingas, belted kingfishers and wild turkeys nesting in the upper reaches of the cypress groves. There will usually be squirrels, raccoons, white-tailed deer, skunks, opossums, river otters, swamp rabbits, bobcats, and small rodents living among the undergrowth.

Between the pine rocklands and the mangrove/cypress swamps, you'll come across coastal lowlands (sometimes referred to as "wet prairies"). These areas can be under water for long periods of time, then above water and completely dry. Some succulents survive in these areas but hardly any trees. 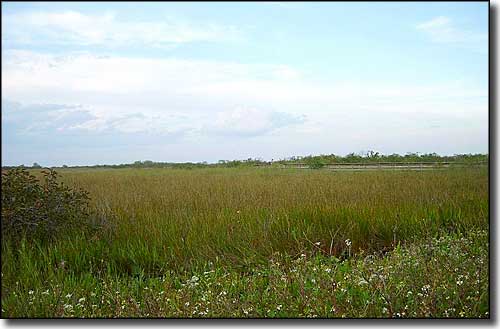 Sawgrass in a freshwater slough beside the Anhinga Trail

When most folks think about the Everglades, what they picture are the freshwater sloughs and marl prairies. These are the low-lying areas that the main rivers flow through. This is where those famous airboats run. This is the "Rivers of Grass" region. It's in the freshwater sloughs that you'll find the poisonous snakes, the alligators and the crocodiles. The marl prairies are a bit different: they lack the slow flowing water of the sloughs. These are the large mud flats that spend most of the year under water and dry out in the winter when the water levels drop.

Dense mangroves along the water's edge 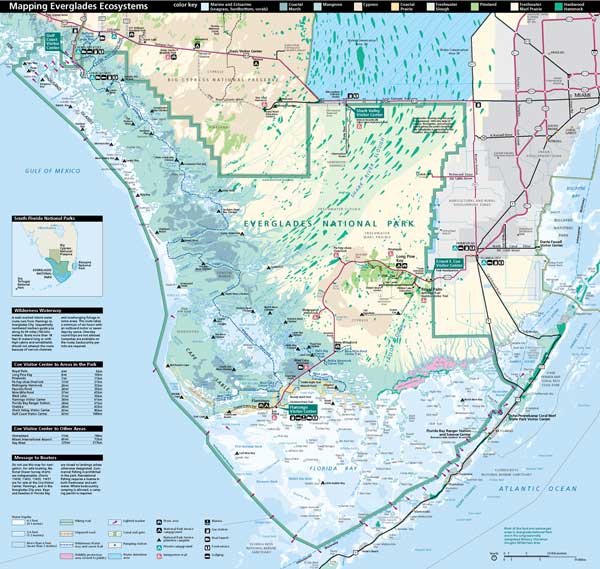