In the Wet Mountains along the Frontier Pathways Scenic Byway

This old frontier zone marks the intersection of Native American, Spanish, French and American territories. First were the Utes, then the European explorers, then traders, trappers, prospectors, homesteaders and ranchers came through and left their marks on the land. Historic buildings from mining operations, Victorian towns and long lost cattle empires line the route. And the snow-capped mountains, carpeted meadows, jagged canyons, and aspen-covered hillsides have not changed.

The granite that composes most of the Wet Mountains solidified some 1.7+ billion years ago, in the Pre-Cambrian era (before life began on Planet Earth). It's the same age as the granite in the Blanca Massif and Pikes Peak. While most of this mountain range is Pre-Cambrian granite, there are a couple areas of Cambrian metamorphic rock (north and east of Lake DeWeese) and the rock deposited at the top of Greenhorn Mountain is only about 25 million years old and solidified about the same time as the Spanish Peaks and the Silver Mountain-Mt. Mestas group. The mining areas around Querida and Rosita are in rock about the same age as the "summit block" of Greenhorn Mountain (Oligocene/Middle Tertiary period) and are located in what were essentially volcanic calderas. Silver Cliff is on the floor of the valley but at the edge of town were several large silver ore bodies, also deposited in similarly-timed ancient volcanic activity.

The Sangre de Cristo Mountains are composed of sedimentary and metamorphic rock laid down in the Pennsylvanian-Permian age and pushed up as a single fault-block uplift about 27 million years ago. Because of the nature of that rock, there was never much to mine there, although the western side of the mountains are against the eroded landform known as the Ancestral Rockies and some small amount of gold and silver has been found there.

The route from Westcliffe to McKenzie Junction rises from the floor of the Wet Mountain Valley to the spine of the Wet Mountains. The backdrop to the west is a long horizon of the (usually) snow-capped peaks of the Sangre de Cristos. To the northwest you will catch glimpses of the Sawatch Range in the distance and to the north are the granite outcroppings above the Arkansas River Valley. Then you''re in the forest and every mile or so you''ll see what remains of old homesteader cabins built in the 1800''s. This area saw a lot of mining back then as the area to the south and the hills around Silver Cliff had some large bodies of silver ore near the surface. When the silver ran out, so did much of the population. But there was time when Silver Cliff was the largest settlement in Colorado and almost became the territorial capital.

At McKenzie Junction in Hardscrabble Canyon I usually turn right to take State Highway 165 to Rye and Colorado City. It''s a beautiful drive through forested mountain countryside. The road is up and down, winding for the most part with a couple of good switchbacks in one spot where you crest the spine of the mountain range again and then start the long journey down.

At Ophir Creek there's a hairpin turn in the paved road. In the middle of the turn there is a dirt road leading westward to Ophir Campground, Deer Mountain and the Greenhorn Mountain Road that dead-ends at the edge of Greenhorn Mountain Wilderness. Just south of Ophir Creek is Bishop's Castle. The road is excellent and, if anything, is too short. Shortly after Bishop's Castle the road passes by Lake Isabel and then leads out onto the flatter grassy slopes of Rye and then down the Greenhorn Canyon to Colorado City and the I-25.

The drive from Pueblo to Wetmore takes you out of the high plains climate zone and into the low montane zone. This is seen by the effects of the increase in precipitation: the grasses and cacti give way to the junipers and pinons of the foothills. There are several ranches along the way that qualify as Centennial Ranches: they've been held by the same family for over 100 years. When they look like this, it's easy to see why the original homesteader's descendants have not moved on.

Over 150 years ago this area was populated by French traders, scrappy Americans and Mexican farmers and their families. In 1844 several Americans from El Pueblo established a Trading Post at San Buenaventura de los Tres Arrollos, a name changed a short while later to Hardscrabble. According to George Simpson (a famous mountain man who was part of the original group of would-be settlers), this was because of the "hard scrabbling to get in a crop" in the gravelly soil. In 1846, a dry year had most of Hardscrabble's residents packing. When John C. Fremont came through in 1848 he found the settlement at Hardscrabble almost completely deserted.

Preparing for Frontier Days in Westcliffe 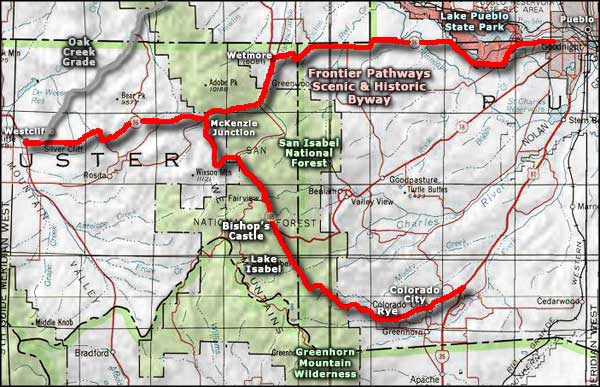