Canyons of the Ancients National Monument

The Great Kiva at Lowry Pueblo, Canyons of the Ancients National Monument 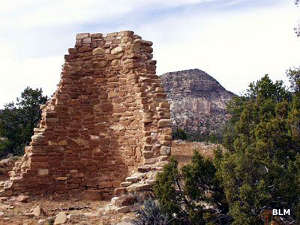 Canyons of the Ancients National Monument contains those parts of Hovenweep National Monument that are in Colorado. This area has been inhabited for at least 10,000 years but most of the evidence we see these days comes forward from about 1500 BCE when the Basketmaker culture first appeared. The Basketmakers were primarily hunter-gatherers but they also left the first traces of corn agriculture. They also left some very fine basketry samples and artifacts indicating there were already far-ranging trade routes in place when they occupied the countryside.

By about 750 CE their architecture had evolved beyond the pithouse stage and many masonry-built, square-roomed structures were in place. Many-roomed pueblos were coming into their own and samples of their highly stylized pottery is found everywhere. The usual story is that the weather patterns changed and the area dried up so badly that many of the folks from those days migrated south and east to the areas of Zuni and the Rio Grande Pueblos by about 1300 CE. That was also about the same time that representatives of the Aztec death cults seem to have appeared in the area, bringing the nastier aspects of their religion with them. After that came the Ute and Navajo nomads who were still in the area when the Spanish arrived in the 1500's. The 1800's saw an influx of Euro-American settlers who established farms and ranches in the area but even today, access to the area is hard because there are only a few roads and most of them are unpaved. One thing to watch out for when traipsing around Canyons of the Ancients: private inholdings scattered among the parcels of BLM-owned land.

Very little in the way of excavation has occurred on the property but most of the ancient artifacts that have been found are stored or are on display at the Anasazi Heritage Center. The best way to begin a visit to Canyons of the Ancients National Monument is to stop there and get your bearings. Certain pueblos have been excavated and others have been stabilized (so they don't collapse further into rubble piles). There is signage pointing to most of them but all are off the beaten path. Many are accessible only on foot. Many folks try to include a visit to Lowry Pueblo in their trip through the area as Lowry is one of the easiest sites to access. If you have more time, you might search out and visit Painted Hand Pueblo, too. But almost everywhere you go at Canyons of the Ancients National Monument, you're liable to stumble across ancient ruins. The thing is: you might not know it because so much of the ancient inventory is in one stage of collapse or another. In some places there are parts of standing towers, in others there is only a scatter of rocks out of place to indicate that something was built here so many hundreds of years ago.

Very little of Canyons of the Ancients National Monument is universally accessible. In most areas, the parking area and marked trail are the only amenities. Many sites still retain spiritual significance among today's Native American tribes in the region. Take only photos, leave only footprints. When you come across petroglyphs, pictographs and painted or plastered walls, remember that the skin oil left by your touch will eventually destroy them. Do your picnicking away from archaeological sites as any crumbs you drop will attract rodents who will tunnel and nest in the site, also contributing to its eventual destruction. Stay away from archaeological sites in low light conditions so that you don't accidentally disturb anything in the darkness and add to the destruction. 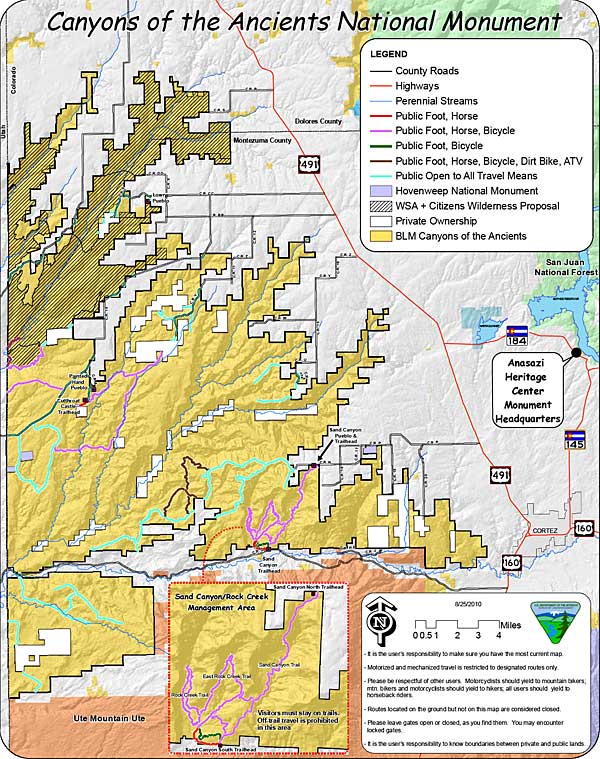 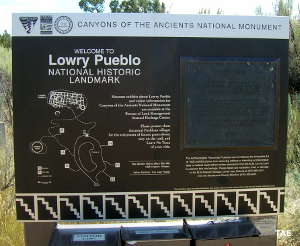 In the 1100's AD, the eight, mostly underground, round, energy-efficient rooms of Lowry Pueblo provided warmth, indoor cooking space and a cozy atmosphere for gatherings. Some of these rooms are still visible while others are covered over. No two rooms are alike. Archaeologists call these rooms "pithouses."

When Lowry Pueblo was first excavated in the 1930's, archaeologists believed that families moved out of the pithouses and into rooms built on the surface around 750 AD. Then they realized that the round rooms became kivas and were used as family centers for both household and ceremonial activities until about 1300 AD. After that almost none of the round rooms were used for household activities as most had been transitioned to use for social and ceremonial activities.

Lowry Pueblo was remodeled and added onto at least 6 or 7 times over the years. There was one flurry of construction between 1085 AD and 1105 AD that saw the pueblo expand from the first kiva and four-room core to a 40-room building. That served the people for quite some time, then Lowry Pueblo was abandoned sometime after 1300 AD.

Lowry Pueblo is famous for its four painted kivas: all the kivas had painted plaster on their lower walls. Kiva A (which has been filled in) had more than 25 coats of plaster, measuring more than 5" thick. Kiva B had similar painted plaster but attempts to preserve the mural in place failed. A fragment of that plaster and a photo taken in 1934 are on display at the Anasazi Heritage Center. All of the kiva murals at Lowry contain geometric design elements that are also found on petroglyphs, textiles and pottery from the same period. These patterns may be the beginnings of the more elaborate imagery found in later pottery, textile and petroglyph designs, some of which are still being produced today in the Rio Grande Pueblos.

Great Kivas are buildings for special community activities, including important religious ceremonies. Pottery remains and tree-ring dating indicate that the Great Kiva at Lowry was one of the first constructions in use, although it appears to have been remodeled many times over the years and was used continuously by succeeding generations.

A visitor from Santa Clara Pueblo interpreted the unique stone features on the floor of the Great Kiva as symbols of summer people and winter people. In each feature are platforms for four pillars to support a roof. Archaeologists found remnants of a wooden post and a single stone bead within each of these platforms.

Great Kiva activities helped define communities and develop a sense of social identity and perhaps even a sense of organized community religion. The people who lived nearby maintained the Great Kivas and may have organized regional seasonal events. There are more than a dozen Great Kivas in southwestern Colorado with many more scattered all over the greater Four Corners region.

Upper left photo and Monument maps courtesy of the Bureau of Land Management
Other photos courtesy of TheArmchairExplorer, CCA-by-SA 4.0 License