A foggy day beneath Mt. Shasta

Encompassing some 39,116 acres, the Tule Lake National Wildlife Refuge is composed of mostly open water and croplands. Originally established in 1928 as a "preserve and breeding ground for wild birds and animals," the Tule Lake charter was amended by the Kuchel Act in 1964 to read "for the major purpose of waterfowl management, but with full consideration to optimum agricultural use that is consistent therewith." That has led to about 17,000 acres of the refuge being leased by local farmers to grow grains and potatoes under a program administered by the US Bureau of Reclamation with another 1,900 acres growing cereal grain and alfalfa for refuge permit holders. That cereal grain and alfalfa with the waste grains and potatoes from the lease program are used to feed migrating and wintering waterfowl at the refuge.

Currently, the greatest issues of concern revolve around the loss of wetlands in the Klamath Basin. With 80% of the original wetlands now dry and used for agricultural purposes, general water quality in the area has been degraded. There is also a major problem in balancing wildlife needs with basin agricultural demands, especially in drought years. Generally, the refuge contains 10,557 acres of open water, 3,128 acres of marsh and 8,415 acres of uplands in addition to the 17,000 acres tied up in agricultural leases. In drought years, that volume of open water drops and the farmers demand more water, causing further drop in the volume of open water... Part of the secret sauce that previously made Tule Lake such a world-renowned site for migratory waterfowl was the ever-changing water levels in the basin with Tule Lake sometimes growing to more than 350,000 acres in size. The restrictions on water levels brought by the Bureau of Reclamation work have succeeded in reducing water levels, increasing silting of the lake and reducing the populations of waterfowl who visit in the spring and fall seasons. In contrast, the Upper Klamath National Wildlife Refuge has no such restrictions and is seeing ever-larger populations of waterfowl visitors.

Tule Lake National Wildlife Refuge is at an elevation around 4,000' and is surrounded by higher mountains. Because of those mountains, weather tends to be unpredictable but generally, summers are sunny and warm with highs around 80°F and lows in the 40's while winters are sunny and cold with highs in the 40's and lows well below freezing. Snowfall in the area averages about 44" per year.

Tule Lake NWR offers an auto tour route that begins about five miles south of the visitor center. Depending on the season, you might be able to see large flocks of geese and ducks (spring and fall), western grebes and white pelicans (summer) and bald eagles and other other raptors (winter). Usually, you'll find self-guided map/booklets available at the kiosk at the beginning of the ten-mile route. The numbers in the booklet correspond to numbered posts along the route and helps visitors to identify some of the common species of birds on the refuge. The booklet also contains sections describing refuge management practices and a history of the refuge.

The Klamath Basin is a large area but accommodations are not everywhere: Tule Lake NWR is not particularly close to any large population centers but nearby Tulelake does offer some amenities. Tule Lake National Wildlife Refuge is a day-use only property, open from sunrise to sunset every day of the year. 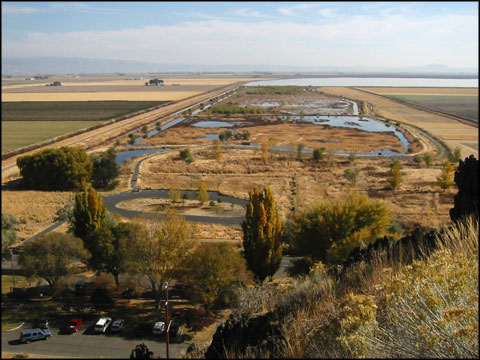 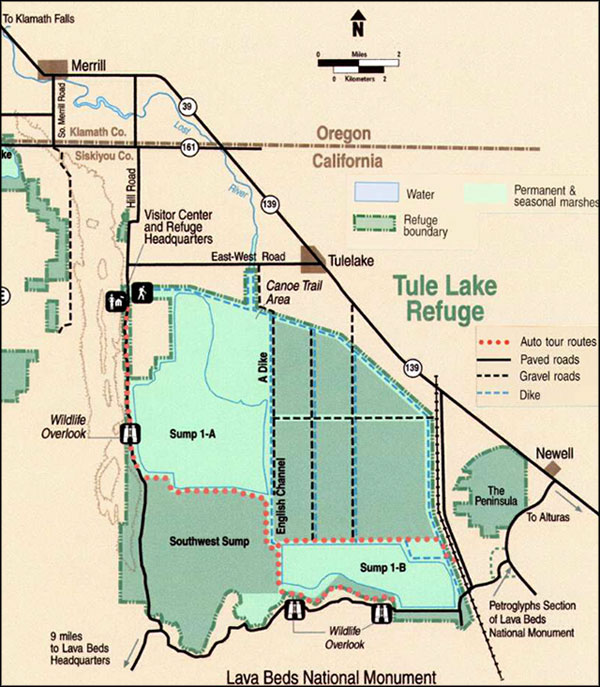