The Bill Williams River flows from the dam at Alamo Lake westward through some gorgeous dry country to its confluence with the Colorado River between Lake Havasu and Parker. The lower reaches of the river hold one of the last stands of natural cottonwood-willow forest in the Colorado River corridor. This is the area of the Bill Williams River National Wildlife Refuge, a 6,105-acre property lined with rock cliffs and usually cut with a ribbon of water.

Previous to the construction of Hoover Dam (1935), the whole lower Colorado River was lined with thick cottonwood forests, with mesquite on the hills rising above. The building of that dam, though, and twenty others on the Colorado and its tributaries since, have destroyed the natural flow of the river and have drowned those old forests under the rising water. It also destroyed a lot of the riparian habitats in the area. The Alamo Dam was built in 1968 and that impoundment of water (and subsequent regulation of intermittent flooding) further reduced the amount of cottonwood and willow forest along the Bill Williams River.

It's a funny spot: you can stand in one place and see a large, overhanging cottonwood near a pond full of cattails below a hill covered with saguaro cactus. The property is a unique blend of desert riparian habitat with upland desert and regular marsh. Part of it is that the Bill Williams River doesn't always flow. It's the main drainage for a large area of central and western Arizona but tends to be dry in the summer months. The folks upstream at Alamo Lake are supposed to be allowing regular water flows out of the lake in the drier months to mitigate the effects on the downstream riparian habitats but, historically, the river has never flowed all year round anyway.

This particular mix of habitats makes a huge draw for hundreds of different species of birds and many different mammalian types. On a good day (one not too hot), you might see vermilion and southwestern willow flycatcher, western tanager, yellow-billed cuckoo, Lazuli bunting and the endangered Yuma clapper rail in the trees and in the air. On the water there might be beaver and in the water there might be bonytail chub and razorback sucker. Sitting by the water at night you might be able to see mountain lion, bobcat, javelina, gray fox, ring-tailed cat, mule deer and desert bighorn sheep come down for a drink. There's also going to be an abundance of rattlesnake in the area...

Bonytail chub and razorback sucker are endangered species of Arizona native fish. Young ones come from Dexter National Fish Hatchery in New Mexico (a US Fish & Wildlife Service site that specializes in birthing and raising endangered fish species) and are released in an impoundment in the cove just below the refuge headquarters. Then they are kept in the cove until they reach about 10 inches in size. At that point, they get released into Lake Havasu and a few other areas where they have a good chance at surviving long enough to, hopefully, repopulate their ancestral waters.

To get there: take Arizona Highway 95 south from Lake Havasu City for about 23 miles. The refuge headquarters is located between mileposts 160 and 161. 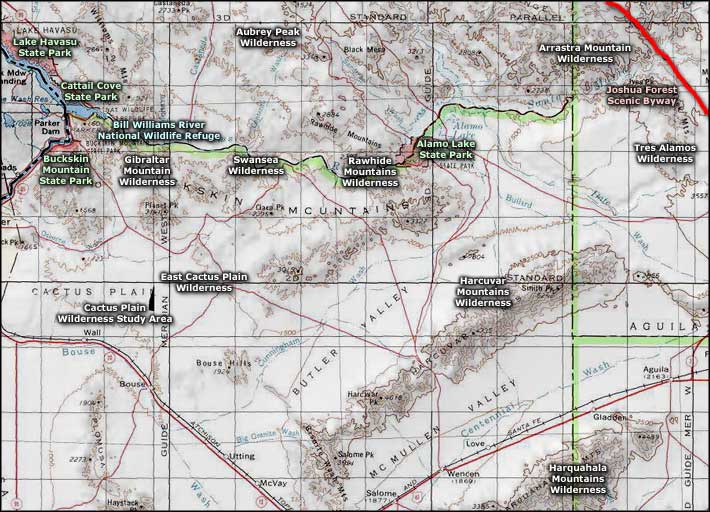