The Superstition Mountains along the Apache Trail Historic Road 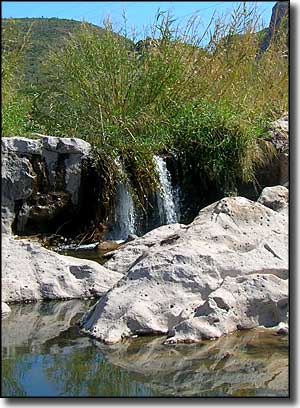 The Apache Trail was built in 1905 along the route of the historic Tonto Trail. The Tonto Trail had been used for hundreds of years by Native Americans as they traveled back and forth between the Mogollon Rim uplands and the Valley of the Sun. When the first "Americans" arrived, they were mostly looking for gold around here and found it both to the east and to the west, so they built a connecting wagon road that followed the ancient Indian pony trail. But an actual drivable road had to be built in the early 1900's to facilitate the construction of Roosevelt Dam on the Salt River. It was Roosevelt Dam and Theodore Roosevelt Lake (as part of the Salt River Project) that made modern Phoenix possible.

Today's Apache Trail Historic Road is a 42-mile route, half-paved, half white-knuckle, washboard dirt with a hair-raising descent at Fish Creek Hill that would do any modern roller coaster justice. Along the way you'll pass three beautiful desert lakes, two major wilderness areas and enough yucca, saguaro, ocotillo and prickly pear to last a few lifetimes. This area is Sonoran Desert uplands at their finest.

Most folks start out by making the turn northeast onto State Road 88 (the Apache Trail, Idaho Road) at Apache Junction. Within the first few easy miles you'll pass the 1890's gold mining camp at Goldfield (rebuilt now and open as a tourist attraction). Then you'll pass Lost Dutchman State Park (camping, picnic sites and many hiking trails giving access to the Superstition Wilderness) - this is the western end of the Superstition Wilderness, easily the busiest part of the Wilderness.

The Superstitions are the remains of a huge volcanic outburst sometime between 15 and 30 million years ago. It's a very rugged area but there are trails in most parts of it. There are even some freshwater springs in the very heart of the mountains but between here and there is a lot of rugged nothing where it's very easy to get lost. Owing to the old legends of the Lost Dutchman Gold Mine, more than 100 people have died in these hills looking for that hidden stake, more than 60 of those dead murdered for their efforts.

Just past Lost Dutchman State Park, the Apache Trail starts the roller-coaster ride up into the northern fringe of the Superstitions. You might think this is nothing but barren desert but in wet years, the wildflower display here is just gorgeous. The road twists too much to go very fast, you'll want to enjoy the views anyway. Then you'll cross the top of the plateau and come in sight of Canyon Lake.

There's nothing quite like that view of this deep blue lake surrounded by sheer cliff walls and desert scrub. Canyon Lake is also a favorite among the Maricopa County folks who are looking to go boating up where it's cooler... and Canyon Lake Marina offers boat rentals.

A couple miles past Canyon Lake will bring you to Tortilla Flat, site of a town built for crews working on Roosevelt Dam back in the day. There were maybe 120 people living in Tortilla Flat until a flood on Tortilla Flat Creek washed away all the buildings on the north side of the road. These days there's just a restaurant, ice cream shop, gift store, country store and campground.

Another mile or so and the pavement ends. The road beyond is recommended for four-wheel-drives with high clearance but a good driver on a dry day can make it in most vehicles. Just be careful around the white-knuckled drivers in the RVs and trucks towing boats... Two miles into the dirt road is the top of Fish Creek Hill: this is technically a one-lane stretch where the road drops 1,500 feet in about three miles. Fish Creek Canyon is at the foot of the drop, a great place to get out and get some color back into your face, let your nerves calm down, take a walk upstream in a canyon sheltered under sycamores and cottonwoods... Lots of easy boulder hopping, secret pools in the stream, even an old outlaw hideout.

Another mile and you'll come to Apache Lake, with another marina, motel rooms, restaurant and tackle shop. One thing with Apache Lake is the water level varies up and down, depending on how wet or dry the last several years have been. From Apache Lake the road hugs the edge of the canyon above the river until you emerge from the narrows just below Roosevelt Dam.

The area around Theodore Roosevelt Lake has turned up many constructions of the ancient Salado people. In 1996, the US Army Corps of Engineers significantly lowered the level of the lake in order to facilitate repairs and reconstruction of the dam itself. With the lowered waters, archaeologists from Arizona State University were able to conduct several digs in the area and unearthed a large complex of Salado buildings, together with a large complex of irrigation canals they used to bring water to their crops. Dating of the artifacts found suggest they abandoned the area in the 1400's, one of the last areas abandoned during a massive drought that began throughout the Southwest in the mid 1200's. While you're in the area, you might want to check out Tonto National Monument and learn a bit about the Salado people.

Update 2019: Arizona DoT has closed 14 miles of the Apache Trail indefinitely. It's the section from milepost 214 (east of Tortilla Flat) to milepost 228 (just west of the turnoff to Apache Lake). The Woodbury Fire of 2019 got close to the road, then heavy rains from a hurricane remnant washed the road out. No word on if or when it will be drivable again. The folks at Apache Lake Resort put the property on the market as business is off by 50% and they don't know if it will ever recover. 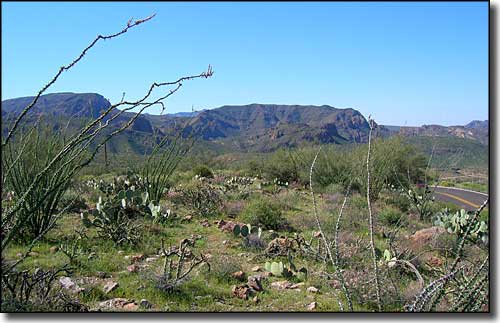 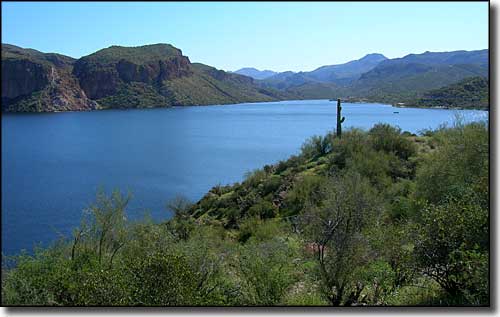 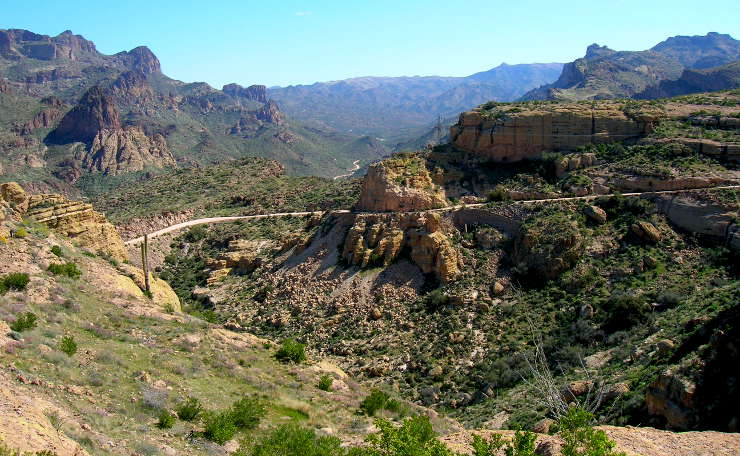