The 44,963 acres of Red Rock Lakes National Wildlife Refuge are located in the high altitude of Centennial Valley, just north of the Centennial Mountains in southwestern Montana. This is a very remote area of wetlands, high altitude prairie and forested uplands. Red Rock Lakes NWR was established in 1935 and is the site of the primary original effort to save the endangered trumpeter swan from extinction. In 1932 there were less than 200 known trumpeters in the wild and the effort to save them has been so successful that by 2002, an estimated 3,000 trumpeter swans were wintering at Red Rock Lakes National Wildlife Refuge.

Most of the Centennial Valley was homesteaded in the early 1900's but the climate was so harsh it eventually caused most folks to rethink what they were doing. Visitors will still see a few of the old cabins and homesteads scattered through the valley but there are very few people who live here year-round.

The altitude of the property varies from a low of 6,600' to a high of almost 10,000' in the Centennial Mountains. More than 250 species of birds have been documented using the lakes and cold water marshlands that make up this uncommon wetland environment. There are at least 20 pairs of nesting Bald Eagles in the area and endangered peregrine falcons and whooping cranes are often seen here.

Red Rock Lakes NWR contains one of the few marshland Wilderness Areas in America and is a designated National Natural Landmark. Refuge staff manage the property primarily for its wilderness value. There are no designated or maintained trails on the wilderness area so if you go hiking there, you're probably going to be walking game trails made by the deer, elk and moose. If there's no snow on the ground (and it can snow here any time of year), you might even be cursing the clouds of mosquitoes in the air. If you should somehow venture unknowing into a wet area, you might be in serious trouble: hazardous bogs and sinkholes are almost everywhere. Outside the designated wilderness areas you'll find two maintained trails that allow access to virtually everything the refuge has to offer.

Camping is only permitted in established campgrounds with a stay limit of 14 days. The established campgrounds are Upper Lake and River Marsh. Both campgrounds offer fire grates and toilets but only Upper Lake offers picnic tables and drinking water. Dead and downed timber can be collected for firewood but chainsaws are not allowed. Fishing is permitted from the end of May to the end of October in certain areas but be aware of special regulations (usually posted at the kiosks at the campgrounds).

To get there: from the I-15 at Monida, go east on County Road 509 for 28 miles. CR 509 is an improved dirt road that is partially graveled. The refuge is open year round (except for weekends and Federal holidays) from 8 am to 4:30 pm. However, access can be hard in the winter with most roads closed by snow into late April. Passenger cars might still have problems with most of the roads into late May. Snowmobiles are allowed on the unplowed roads across the refuge but are not allowed anywhere on the refuge itself. 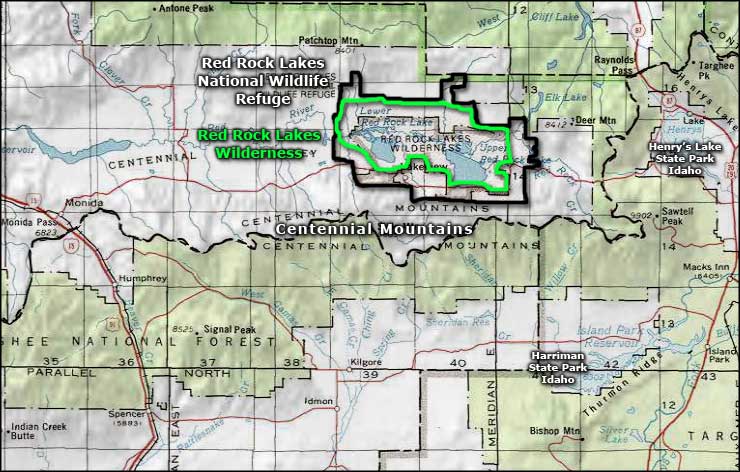