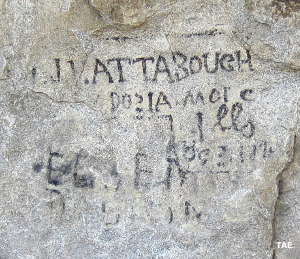 There were whole other California Trails, too, that traveled across the western territories to the south of what is now the designated California National Historic Trail. Trails that went across Colorado, Utah and Nevada into central and southern California, or across New Mexico and Arizona into southern California. And then there were the older Spanish trails: Juan Bautista de Anza that went from Tubac, Arizona to Monterey, the Old Spanish Trail between Santa Fe and Monterey and the Dominguez-Escalante Trail: a failed attempt to find a better overland route to California from Santa Fe.

But today's California National Historic Trail is mostly that grouping of routes that crossed Nebraska and Wyoming together with the slightly older Oregon Trail and the contemporaneous Mormon Pioneer Trail. All three routes followed essentially the same rivers and valleys and crossed the same mountain passes between the Platte River and southwestern Wyoming, where the Mormon Pioneer Trail headed off to the southwest while the California and Oregon Trails continued northwest together for another 100 miles before separating near what is now Soda Springs, Idaho.

Near Soda Springs, the California Trail headed off to the southwest, going to what is now the City of Rocks National Reserve, then crossing into Nevada Territory near the state line intersection of Nevada, Idaho and Utah. They tended to follow Goose Creek up the hill to its source, cross over the low pass there and officially enter the Great Basin (again). They followed Thousand Springs Creek down to the Humboldt River and then followed that westward until it sank into the sands near what is now Lovelock, Nevada. Just north of that, near today's town of Imlay, the trail started to unravel with threads heading off in mostly westward directions.

One large branch headed northwest across the Black Rock Desert to northeastern California and southeastern Oregon. Other branches headed south of Pyramid Lake and entered the Sierras north of Lake Tahoe, to emerge from the mountains along the Yuba, Truckee, Feather and Rubicon Rivers. Another route headed down the mountains east of Lake Tahoe before turning west and heading over the passes used by John C. Fremont in 1845, and by the Mormon Battalion when they returned to Utah from California in 1848. There were other routes, other passes, but these were the main ones in use up until the railroad built over Truckee Pass in 1867, headed for its date with destiny at Promontory Point in Utah in 1869.

Wagons left behind near South Pass City in Wyoming

The first group of settlers recorded to have journeyed over the major part of the California Trail and actually reached California were the Bidwell-Bartleson party in 1841. There were 69 people in their party when they left Missouri and headed west, going to the Platte River and following the main route of the Oregon Trail to the Soda Springs/Sheep Rock, Idaho area. At that point, some of them chose to continue on to Oregon instead and the group split in two. Those headed for California opted to go south, almost to the Great Salt Lake. This was several years before the Mormons arrived in Utah so, except for various Indian tribes they met along the way, they were completely on their own. In those days before the great American invasion, the Indians were reasonably helpful. That changed over the next few years.

But just north of the Great Salt Lake, the Bidwell-Bartleson party headed west, around the north shores of the lake across a relatively barren countryside. They made their way down the western edge of the Bonneville Salt Flats and it was somewhere between there and the Humboldt River that they abandoned all their wagons, loading everything they could onto their livestock and traveling as a pack train. Once at the Humboldt, they followed what became the main route across Nevada and finally arrived in California in November, 1841 with 39 people still in the party.

The Stephen-Townsend-Murphy party of 1844 were the first group to make the trip and actually get all their wagons to California. However, they tried to cross the Sierra Nevadas through Truckee Pass and got caught in some nasty winter weather. They ended up leaving their wagons at Donner Lake and hiking down the hill on foot. When spring finally came, they returned to Donner Lake and retrieved their wagons and all their stuff.

Kit Carson led John C. Fremont across the Great Basin in 1845, as they headed for California in preparation to take over the territory should the Mexican War break out that year. They blazed a route across the Great Salt Lake Desert and over the Bonneville Salt Flats, then over the mountains and south around the Ruby Mountains before heading down to the Humboldt where they followed the main route to the eastern slopes of the Sierra Nevadas near Lake Tahoe. They were intent on surprising the Mexican authorities in California so they went south around Lake Tahoe and blazed the trail that became the Carson Cutoff. However, they had a lot of trouble in getting over the Sierras and down into the lower areas of California, almost starving to death on the way. An Indian tribe finally found them and fed them.

In the summer of 1846, a group of emigrants running late in the season decided to try the "short-cut" that Fremont's people had publicized on their return to the east. Among the group was the ill-fated Donner-Reed party, made famous by a cannibalism incident when they got caught high in the mountains in winter weather. ("Opportunistic cannibalism" was a pretty common occurrence in the west in those days, right up into the 1880's in some areas.)

It was also in the summer of 1846 that an enterprising group came east from the southern Willamette Valley in Oregon and surveyed a trail to Fort Hall, Idaho. On their way back they led about 150 pioneers (and their wagons) down the Humboldt River to about where Imlay is now and then journeyed northwest across the Black Rock Desert, eventually creating what became the Applegate-Lassen Emigrant Trail. In 1848, a couple years after the Applegates surveyed that route, Peter Lassen blazed a trail northeast from his ranch in northern California and joined with the Applegate Trail near Goose Lake.

The Mexican War ended in 1848 and the Mormon Battalion was finally released from military service after having blazed a trail across the southern deserts, from the vicinity of Las Cruces, New Mexico to the Tubac Presidio in Arizona to San Diego. When released, they traveled north into central California and then headed east over the Sierras, cutting a wagon road across Carson Pass that soon became the preferred wagon route after news of the gold strike at Sutter's Mill got out late in 1848.

For the Indian tribes along the California Trail, that gold discovery was tantamount to a declaration of war against them. President Polk stood in front of Congress in December, 1848, and confirmed the news to the general American public. By spring, the catastrophic disease "gold fever" had infected tens of thousands of people in the eastern states and they set out to go to California with all their diseases, their weaponry and their lack of wilderness survival knowledge, but with plenty of arrogance and greed. The diseases brought into the west by this huge influx of the unwashed (and unhealthy) Eastern masses wiped out thousands of Indians who had never been exposed to things like smallpox, tuberculosis and cholera. And unlike the Euro-Americans, the Indians knew better than to use their drinking water sources for toilets.

Most wagon trains making the journey in 1849 were composed of men. By 1852 about one-third of the travelers were women and children. By 1857, whole wagon trains were only women and children. Where the Indians had often been helpful prior to the mad rush of Americans, by 1850 they were avoiding all the wagon routes because of the amount of violence going on between the whites: wagon trains were being attacked regularly, their possessions being looted and stolen, their women raped, their children taken to be sold into slavery or for ransom and their men brutalized and murdered. The attackers: usually white criminals dressed up as Indians. However, as the atmosphere of fear rose along the wagon roads, the Indians were eventually drawn into the hostilities and by the late 1850's and early 1860's, Indians and whites were routinely killing each other wherever they happened to meet.

Big travel on the California Trail slowed down when the Golden Spike was finally set in the Transcontinental Railroad in 1869. A lot of freight was still being carried in wagons until about 1880 but by then, branch railroads had been run just about everywhere worth going, although the "last mile problem" still kept freight wagons and cable tramways working high in the mountains in some areas.