In late July, 1776, the Dominguez-Escalante Expedition started out from Santa Fe, New Mexico to find a route to Monterey, California. There were ten men in the group, with Father Silvestre Velez Escalante and Father Francisco Atanasio Dominguez as co-leaders. Along the way to Monterey they were also to explore the possibilities of trade and establish new missions among the Native Americans they came across. Maybe 10 weeks after departing Santa Fe, they had made it almost as far as Thermo Hot Springs in Utah when they were stopped by a blizzard (in early October). Supplies were short, they were pretty burned out on the adventure and fearful of the coming winter so they cast lots to make a decision as to whether to continue on to Monterey or return to Santa Fe. The lots decided and they turned around and went back to Santa Fe. Along the way they crossed the Virgin River near present-day hurricane, then camped in the Sand Mountain area before heading southeast to cross the colorado river near today's Navajo Bridges. They visited with the Navajos and Hopis for a bit, then headed for the area of Zuni Pueblo. From there they traveled east to the Rio Grande, then north to Santa Fe, arriving there on January 2, 1777.

The notes they made and maps they drew were used by others in later years to blaze variations of the Old Spanish Trail. Some of their notes on Native American tribes were even used by Lewis and Clark during their expedition.

The Dominguez-Escalante Trail is a marked National Historic Trail. Thermo Hot Springs is about 30 miles northwest of Cedar City. Take Highways 56 and 253 west from Cedar City to the intersection with Highway 19. Turn north on Highway 19 and go to Lund. In Lund, turn right at the railroad tracks and follow that road to the sign for "Thermo Hot Springs." Another method of getting there is to find the marked trail just out of Cedar City and walk the 25 miles... The BLM St. George Field Office has also placed markers along the route on the public lands in Washington County.

At the Interstate 15 rest area south of Kanaraville there's interpretive signage regarding the Dominguez-Escalante Expedition, with maps of their journey and points of interest along the way. 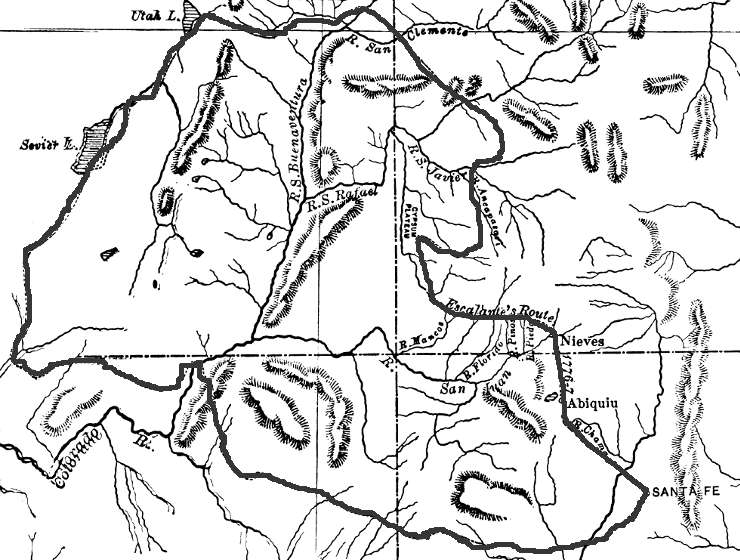