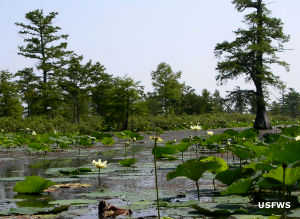 On the Mingo River

Mingo National Wildlife Refuge is a 21,676-acre property in the Bootheel of Missouri. The southwestern boundary of the refuge is against Lake Wappapello. The purpose of Mingo National Wildlife Refuge is two-fold: preserve a bottomland hardwood habitat and provide resident and migratory waterfowl with nesting, feeding, breeding and resting habitat.

About 18,000 years ago the Mississippi River flowed through this area. Then the river eroded its way through Crowley's Ridge to the north and the river flowed more easterly to join the Ohio River where it does now. The abandoned riverbed became a rich and fertile swamp, fed regularly by overflows from the nearby St. Francis River. Native Americans came to the area to hunt and left thousands of years of evidence of their success behind. Then came the Euro-American invasion...

Settlers and farmers began arriving in the early 1800's and brought the bad agricultural practices of the day with them. By 1910 the farmers and lumber interests had denuded most of the Bootheel area and they began to default on the property taxes rather than support an unprofitable holding. That brought in developers who thought they could drain all the swamps in the Bootheel and turn it into an attractive place to live. That effort failed and died in the 1930's.

In 1945, the US Fish & Wildlife Service bought 21,676 acres of the Mingo Swamp and created Mingo National Wildlife Reserve. When they purchased the land it had been devastated by years of corporate and personal mismanagement: the lush swamp had been turned into an eroded wasteland. It took years to recover but careful management has brought the swamp back to life. Take a float down the Mingo River today and you wouldn't know the difference.

In 1976 Congress designated the 7,730-acre Mingo Wilderness. The Wilderness area contains swamp, riparian areas and a piece of the Ozark Plateau uplands. The Ozark Highlands Auto Tour (a road open March-to-November, as wildlife and weather conditions permit) wraps around the wilderness area on the south, west and north. What's contained inside that boundary is the most pristine region of the Mingo Swamp and accompanying Ozark Highlands.

There are seven natural areas and 99 archaeological sites recorded on the refuge. The giant cypress dominating the swamp provides a lot of nesting platforms for eagles and other birds. Turkey, beaver, otters and amphibians are among the most spotted creatures in the area but there have been more than 275 species of resident and migratory birds seen at Mingo.

A $3 (subject to change) entrance permit is required year-round to visit Mingo National Wildlife Refuge. The property offers a visitor center, 3 auto tour routes and picnic facilities but everything is day-use only. There is also a Swampwalk Nature Trail: a 0.8-mile accessible boardwalk route through a section of Mingo Swamp. Overlooks are available at Monopoly Overlook, Red Mill Drive and Rockhouse Marsh. Fees are subject to change. 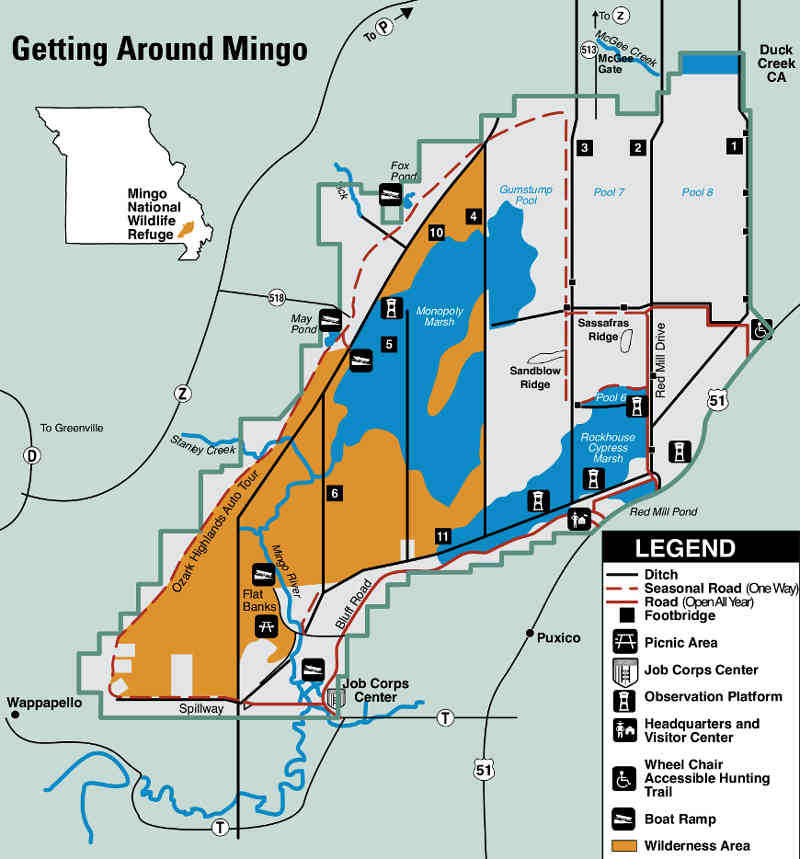