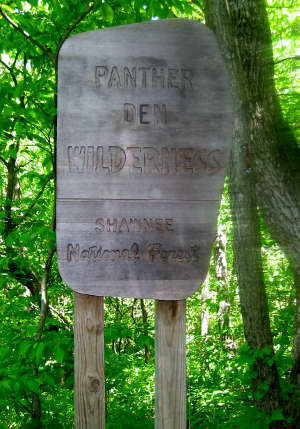 There was a time when this area was virgin forest but once the Euro-Americans arrived, the forest was clear-cut to create marginal farmland. The forest at Panther Den is all second-growth and it's possible to hike the area following old roadways that haven't been completely reclaimed by the vegetation yet. The property is also accessible via the River to River Trail (a route that crosses southern Illinois between the Ohio and Mississippi Rivers mostly through Shawnee National Forest). The National Forest Service has been building new trails in the area because the human impact has been heavy, especially among the equestrian set.

Muskrats, beaver and deer are common sights in the area. If you want to see a bobcat in Illinois, this is one of the better places to go looking. You might also find evidence of prehistoric human occupation if you look as there are some ancient rock shelters already recorded in the area.