Looking south at the north end of the byway

At Arco, the byway turns to the west and crosses Craters of the Moon National Monument and Preserve before coming to Carey, then Richfield, then Shoshone where the Peaks to Craters Scenic Byway ends at the junction with the Sawtooth Scenic Byway (Idaho Highway 75). The entire length of the byway is on US Highway 93.


Rising out of the Salmon River canyon

Gold was discovered near Mackay in 1879 although real production didn't get underway until 1884. Unlike most gold strikes, the amount of gold found in this area was enough to keep some of the miners working right up into the 1980's. Almost a million tons of ore were dug out of the ground in places like Cliff City and White Knob, although both towns were abandoned in the 1930's. If you're driving through the area, you might want to stop and check out Mackay's Mine Hill just for the spectacular views of the Lost River Mountains and the Lost River Valley.

Arco is on the edge of the Idaho National Laboratory and was the first city on Earth to be lit by nuclear power (the Idaho National Laboratory was for many years a facility for research into the design and construction of nuclear power plants). King Mountain, just up the Lost River Valley from Arco, is the site of the World Hang Gliding Championships, located here because of the wondrous drafts of air flowing up the open valley.

The Silver Creek area is world-renowned for the quality of its fly fishery. Sections of the National Forest in the vicinity of Borah Peak and Leatherman Peak are under consideration as potential national wilderness areas because of the vast roadless and trail-less areas of talus fields, steep terrain and deep canyons. There are campgrounds, hiking trails, climbing routes, fishing streams, world-class big game hunting and more available to outdoor sportsmen who visit. But if you're coming here to find a shopping mall, you'll be sorely disappointed.


Vertical rock layers in the mountains 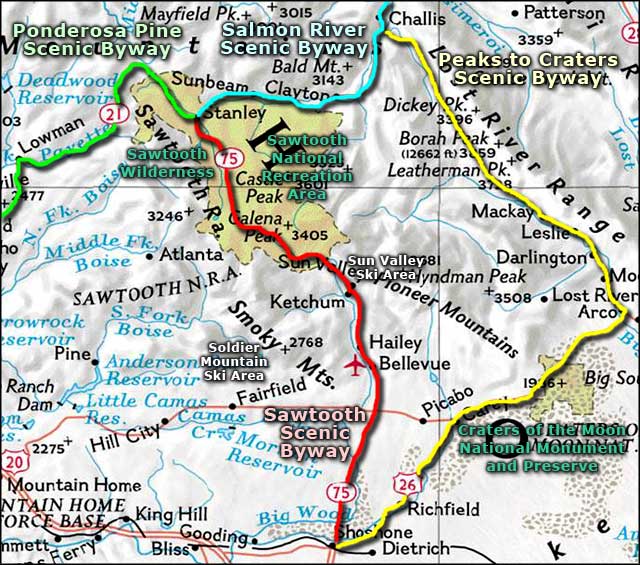