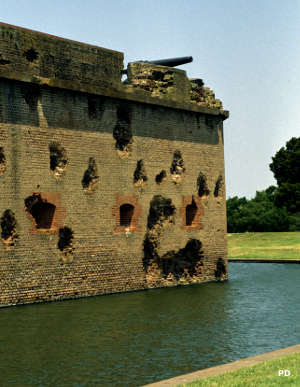 Fort Pulaski National Monument is a 5,623-acre property occupying the major part of Cockspur Island in the mouth of the Savannah River. The fort had been built between 1829 and 1847 and was one of the Third System of coastal fortifications. The construction was characterized by brick walls eleven feet thick, thought strong enough at the time to withstand all but the largest of land artillery. When South Carolina seceded from the Union, Georgia Governor Joseph Brown ordered Georgia Militia to take Fort Pulaski and hold it. Shortly after Georgia seceded from the Union in February, 1861, Confederate troops occupied the fort. The following December the local Confederate commander decided to pull back from Tybee Island, feeling the island was too far away and too unprepared for conflict to be worth holding. That opened the door for Union troops to come ashore and settle in.

On April 10, 1862, those Union troops asked Confederate Colonel Charles Olmstead to surrender the fort and all his forces in order to prevent needless loss of life. The Colonel declined. Shortly after that, the Union forces began a prolonged bombardment of the fort using the new James Rifled Cannon. Within thirty hours, one wall of the fort had been breached and shells were passing directly inside the structure. Then Colonel Olmstead surrendered as the Union artillery had clearly demonstrated the days of masonry forts were over.

Within six weeks of that surrender, Union forces had repaired the fort enough to be able to block all shipping in and out of Savannah harbor, essentially making the city useless to the Confederacy. 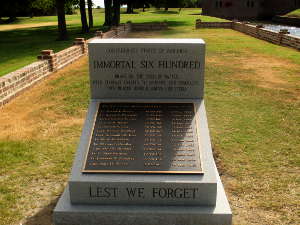 The Immortal 600 Monument
at Fort Pulaski

For the remainder of the war, Fort Pulaski served as a station on the Underground Railroad (slaves became free automatically on arrival) and as a prisoner-of-war camp. After the Confederates began using Union prisoners as human shields in Charleston, South Carolina, the Union moved the "Immortal 600" (Confederate prisoners of war) to Fort Pulaski. That was after the conditions at nearby Andersonville Prison became clear. The Union fed them reduced rations (ten ounces of moldy cornmeal and half a pint of soured onion pickles) for 42 days. Thirteen men died of dysentery and/or scurvy in that time. Shortly after that ended, the men were transferred to Hilton Head Island, then to Fort Delaware where they ended the war. Fort Pulaski served as a military and political prison for several years after the war, housing inmates who were formerly members of the highest echelons of the Confederate government.

By the beginning of the twentieth century, Fort Pulaski was falling badly into disrepair. President Calvin Coolidge declared the site a National Memorial in 1924 but it wasn't transferred to the National Park Service until 1933. Fort Pulaski National Monument was opened to the public just before World War II, then was taken over by the War Department for a few more years to be used as a Navy section station. The property was returned to the NPS after the war and was listed on the national Register of Historic Places in 1966.

Fort Pulaski National Monument is open daily from 9 am to 5 pm except for Thanksgiving, Christmas and New Year's Days. Entry fee: $5 per person age 16 and older, younger get in free (fees subject to change). The entry ticket is good for seven days after purchase. The monument is day-use only and vehicles need to be off the island before the bridge gate closes at 5:15 pm. Something to be aware of: there are sometimes alligators in the moat around the fort...